On July 1, 2005, Massachusetts became the first state in the nation to launch an independent, consolidated department with a primary focus on early childhood learning and care. This innovative governance structure had equal standing with the state's Department of Education and Board of Higher Education. In Massachusetts, and nationally, the new Department of Early Education and Care (EEC) was greeted with excitement, high expectations and a keen sense of watchfulness. The new consolidated Department was expected to improve upon the previous system and forge new ground in early education through the development of a system of universal pre-kindergarten (UPK) for every three-, four-, and five-year-old child in the Commonwealth. The creation of the Department was viewed as an opportunity for Massachusetts "to lead the way in providing coordinated, cost-effective, high-quality early education and care." The creation of the Department was the culmination of several years of work by advocates and policymakers and was influenced by a growing focus statewide and nationally on the importance of high-quality early education. The primary impetus for the agency was to develop a system of UPK through a mix of private and public providers, which the existing governance structure was not capable of overseeing. Several additional factors contributed to a heightened focus on the needs of the youngest children. Brain research over the past decade has directed increased attention to early education as it showed the long-term impact of high-quality early education and its potential return on investment. Specifically, research has shown that low-income children who participate in a high-quality early education are more likely to excel in school, stay off welfare and out of jail, and to later become good parents themselves. Research into the economics of early education also showed that investments in high-quality early education could lead to as much as a 16% return on investment. Growth nationally in the number of women engaged in the workforce further elevated the focus on the need to provide access to high-quality early education and care --and this growth is projected to continue. Another important factor influencing the creation of the Department was the move toward standards and accountability in K-12 education, which aspires to have all children achieve to their fullest potential. Increasingly, it has become evident that a high-quality early education experience is a fundamental component of an educational continuum that ensures that children, especially those at-risk, have the necessary foundation to succeed in the K-12 system and in life. This case study describes the evolution of EEC from its early conceptions to its impact in its first two and a half years. The goal of the study is to provide a reference and resource for other state governments, advocacy groups and philanthropies seeking to develop a consolidated governance structure for early education and care. While this case focuses primarily on EEC's services for children ages three through five, it is important to note that the agency serves children age birth through 14. Through this case, we chronicle the purpose, history and evolution of EEC, articulate "lessons-learned" to date and identify future opportunities and challenges for EEC as it strives to meet its statutory mandates. The report is divided into the following sections: 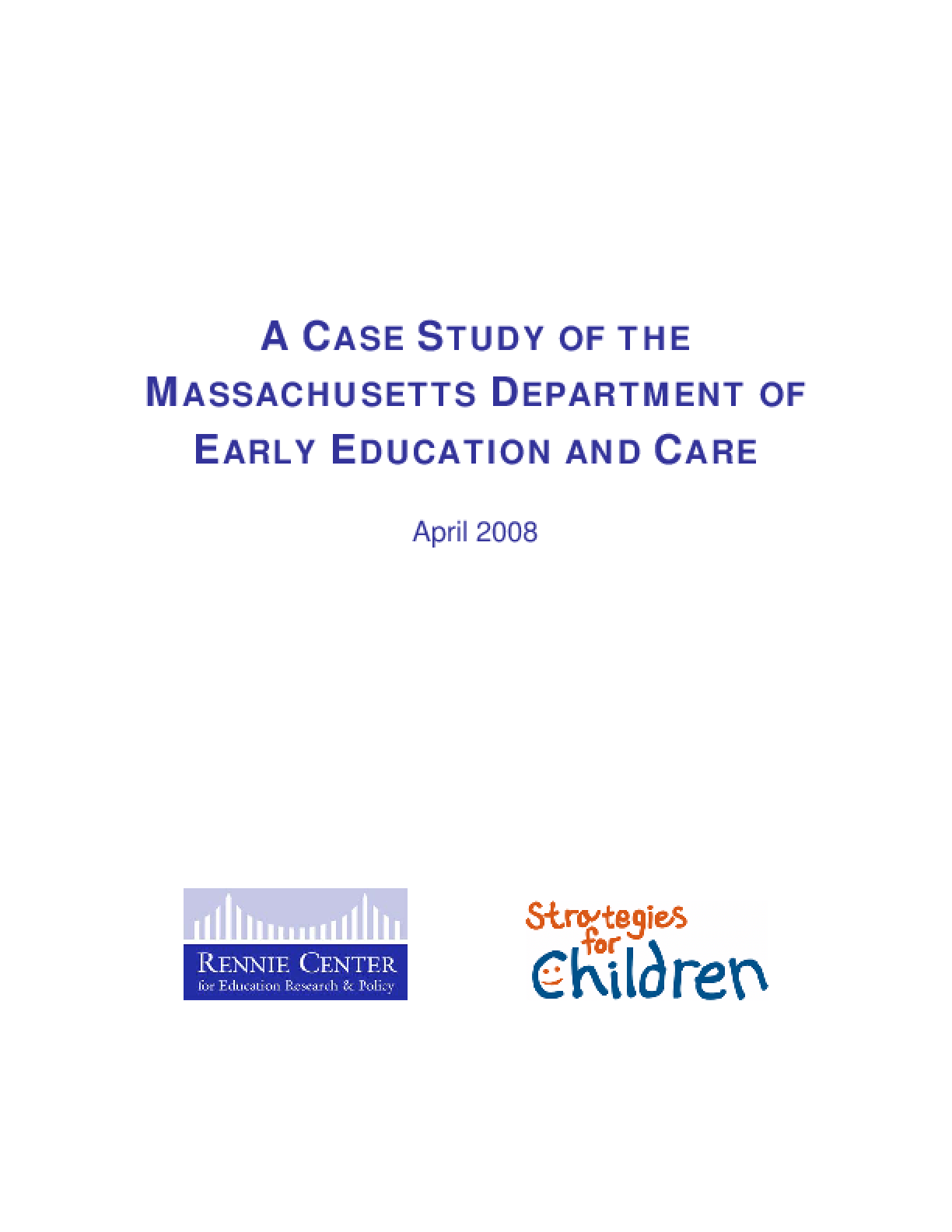