The United Nations have recognised the universal human right to water and sanitation on 28 July 2010, through Resolution 64/292. In this resolution the UN acknowledged that clean drinking water and sanitation are key factors to the accomplishment of all human rights. The Resolution calls upon States and international organisations to provide financial resources, help in capacity-building and technology transfer with the objective to provide safe, clean, accessible and affordable drinking water and sanitation for all. The resolution was hailed by many as a "historic" achievement, but as the international community commemorated the second anniversary of that resolution in July 2012, there was hardly any political rejoicing either inside or outside the United Nations. (IPS, 2012)The European Union is founded on the values of respect for human dignity, freedom, democracy, equality, the rule of law and respect for human rights. The European Union shall contribute to (…) eradication of poverty and the protection of human rights (European Union, 2010). The rule of law and human rights are not the only principles on which the European Union is founded. The expansion of a common market has arguably been more influential. (Both Ends, 2008)A European Citizens' Initiative allows EU-citizens to bring an issue to the European political agenda by collecting one million signatures coming from at least seven different EU Member States. The European federation of Public Service Unions (EPSU) decided to take up this challenge and try to put the 'human right to water and sanitation' on the European agenda, with overarching goal of implementing the human right to water and sanitation in European legislation. The aims of this European Citizens' Initiative are to ensure water and sanitation for every person in the European Union; to achieve universal (global) access to water and sanitation and to safeguard the limited public water resources for future generations by keeping water out of the European internal market. Water is not a commodity; it is a fundamental human right and a public (common) good. The campaign aims to ensure that water is seen as a public good and that protecting our water environment prevails over commercial interests. The mind-set ofthe European Commission is currently that of a market-based approach with the focus on competition. This approach is only increasing inequalities and not serving a more equitable, sustainable and just society. A rights-based approach is advocated. The European Citizens' Initiative (ECI) is a tool for participatory democracy and to be tested in its usefulness to achieve implementation of this human right and to achieve a paradigm shift in European water policy. This ECI is therefore a threefold test case.In the first place to prove itself as a democratic tool. Secondly, to see if results in the implementation of the human right to water and sanitation and thirdly, to see if a significant step to a paradigm shift, from growth to sustainability and from a market based approach to a rights based approach, can be made. 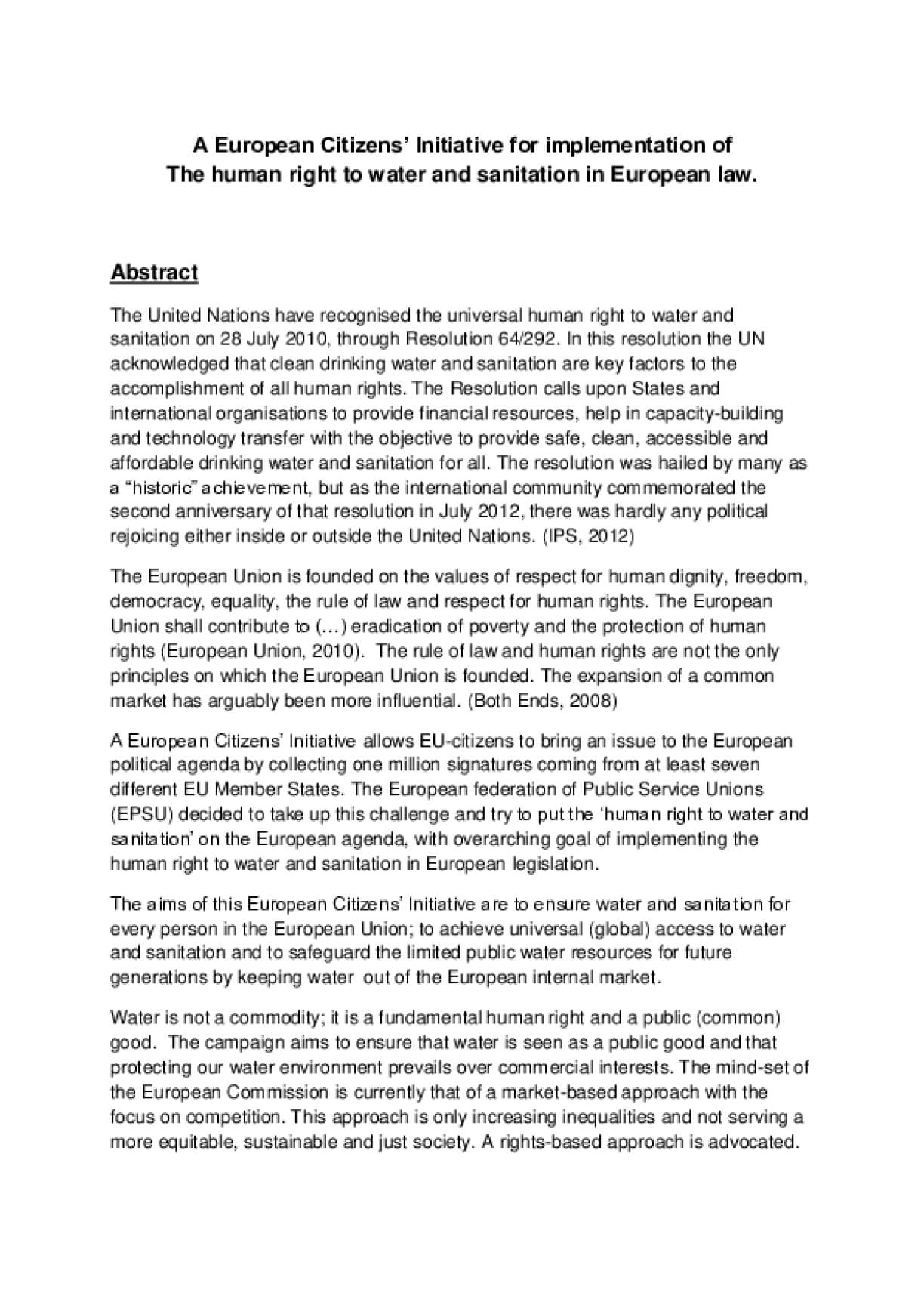