Acetogenic bacteria are able to use CO2 as terminal electron acceptor of an anaerobic respiration, thereby producing acetate with electrons coming from H2. Due to this feature, acetogens came into focus as platforms to produce biocommodities from waste gases such as H2 + CO2 and/or CO. A prerequisite for metabolic engineering is a detailed understanding of the mechanisms of ATP synthesis and electron-transfer reactions to ensure redox homeostasis. Acetogenesis involves the reduction of CO2 to acetate via soluble enzymes and is coupled to energy conservation by a chemiosmotic mechanism. The membrane-bound module, acting as an ion pump, was of special interest for decades and recently, an Rnf complex was shown to couple electron flow from reduced ferredoxin to NAD+ with the export of Na+ in Acetobacterium woodii. However, not all acetogens have rnf genes in their genome. In order to gain further insights into energy conservation of non-Rnf-containing, thermophilic acetogens, we sequenced the genome of Thermoanaerobacter kivui. Results The genome of Thermoanaerobacter kivui comprises 2.9 Mbp with a G + C content of 35% and 2,378 protein encoding orfs. Neither autotrophic growth nor acetate formation from H2 + CO2 was dependent on Na+ and acetate formation was inhibited by a protonophore, indicating that H+ is used as coupling ion for primary bioenergetics. This is consistent with the finding that the c subunit of the F1FO ATP synthase does not have the conserved Na+ binding motif. A search for potential H+-translocating, membrane-bound protein complexes revealed genes potentially encoding two different proton-reducing, energy-conserving hydrogenases (Ech). Conclusions The thermophilic acetogen T. kivui does not use Na+ but H+ for chemiosmotic ATP synthesis. It does not contain cytochromes and the electrochemical proton gradient is most likely established by an energy-conserving hydrogenase (Ech). Its thermophilic nature and the efficient conversion of H2 + CO2 make T. kivui an interesting acetogen to be used for the production of biocommodities in industrial micobiology. Furthermore, our experimental data as well as the increasing number of sequenced genomes of acetogenic bacteria supported the new classification of acetogens into two groups: Rnf- and Ech-containing acetogens. 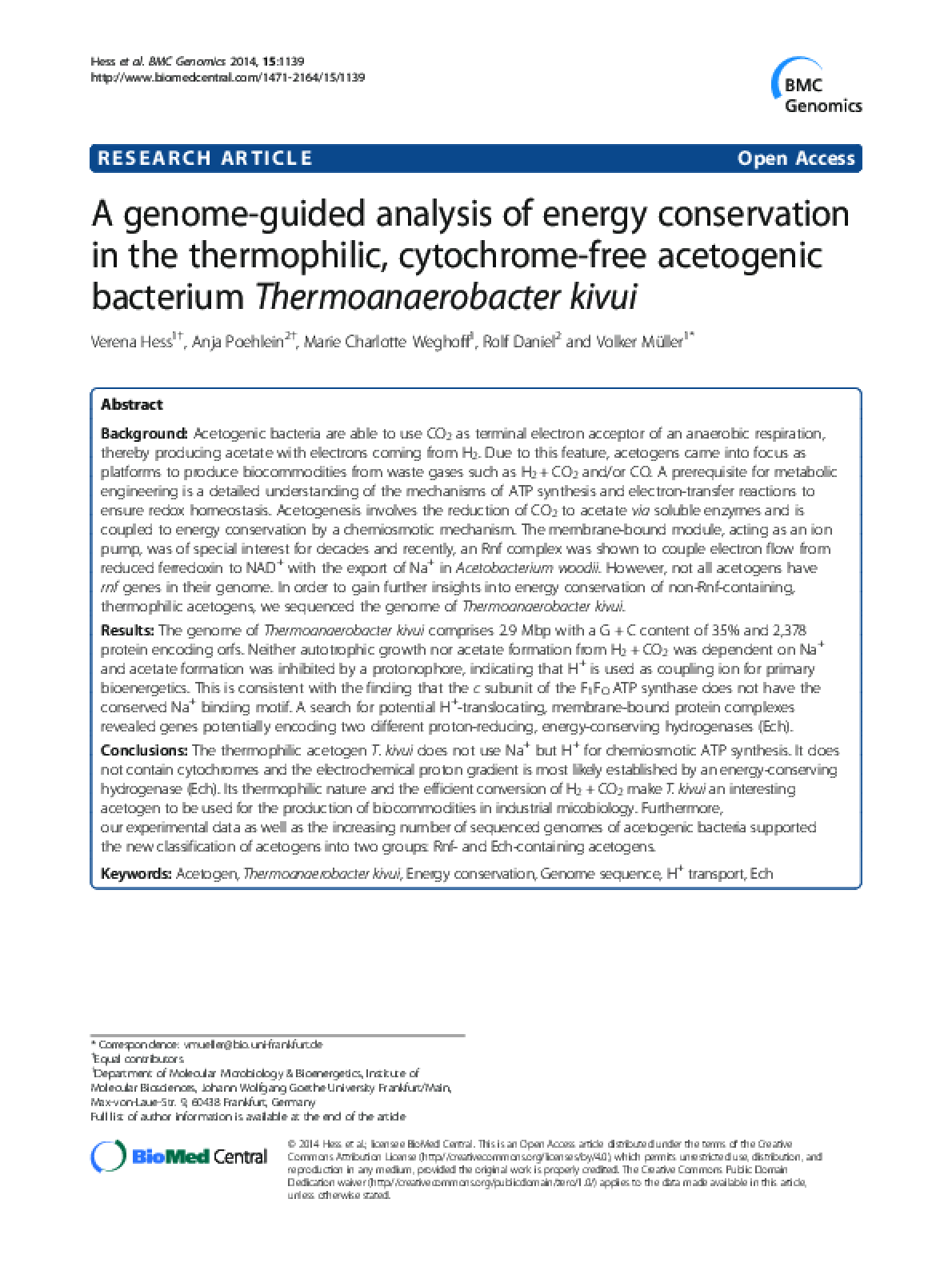