A Guide to the GOP Tax Plan: The Way to a Better Way

by David A. Weisbach

The tax reform plan -A Better Way -put forward by the chairman of the House Ways and Means Committee Kevin Brady and the Speaker of the House, Paul Ryan would be the most substantial tax reform in the United States since the enactment of the income tax in1913. At the corporate level, the reform would allow immediate expensing of investments, deny deductions for net interest expense, and eliminate the taxation of income from sales in foreign countries while taxing the full value of imports (together shifting the tax base to a destination basis). At the individual level, the system would tax capital income including interest, dividends, and capital gains at half the rate that wages and salaries are taxed. It would also repeal the estate and generation skipping taxes. These changes would go a long way toward shifting the tax system to taxing consumption rather than income. This paper considers the implementation of the House GOP tax plan and addresses issues that will need to be resolved if the plan is to work as intended. The plan is based on, and builds off of a long history of thinking about consumption taxes. To understand the basic choices made in the plan, it is helpful to understand this history and how consumption taxes work in general. The paper provides a nutshell version of this history. It shows that the plan is essentially the same as the proposal put forward by the tax reform panel convened by President Bush in 2005 known as the COLUMBIA JOURNAL OF TAX LAW [Growth and Investment Tax. That plan, in turn, was a modification of two similar consumption tax proposals, the Flat Tax and a closely related plan known as the X-tax. And these proposals are modifications of the standard VAT used throughout the world.Understanding how VATs work and the issues they raise, as well as the reason for the various evolutions in the proposals allows us to understand the central issues that will arise in implementing the Brady plan.After summarizing this history, the paper turns to the issuesthat will need to be resolved to implement the plan, focusing on eightsets of issues: (i) the design of the business tax; (ii) the relative taxrates for corporations, partnerships, labor income, and the capitalincome of individuals; (iii) international tax issues; (iv) the taxation offinancial instruments and institutions; (v) the taxation of corporatetransactions such as mergers and acquisitions; (vi) deferral and thefunctioning of the individual-level tax on capital income; (vii) issuesrelating to the individual tax base such as the mortgage interestdeduction; and (viii) problems of transition.Some of the problems in the current draft of the Brady plan,such as inconsistencies in the design of the corporate tax, are easily fixed. Some problems, such as the treatment of pass-through entities and the taxation of major corporate transactions, can be improved with modest substantive changes. Others, such as the taxation of financial institutions, will require substantial effort to get right, but approximate solutions exist. Finally, some issues, such as the taxation of capital income at the individual level, will not be readily fixed. Thebasic structure of the plan may not be workable for these issues andresolution of these issues might require structural changes to the plan.Overall, I believe that a system following the contours of the HouseGOP tax plan can be made to work, but solving the implementationproblems will take time, effort, and compromises. 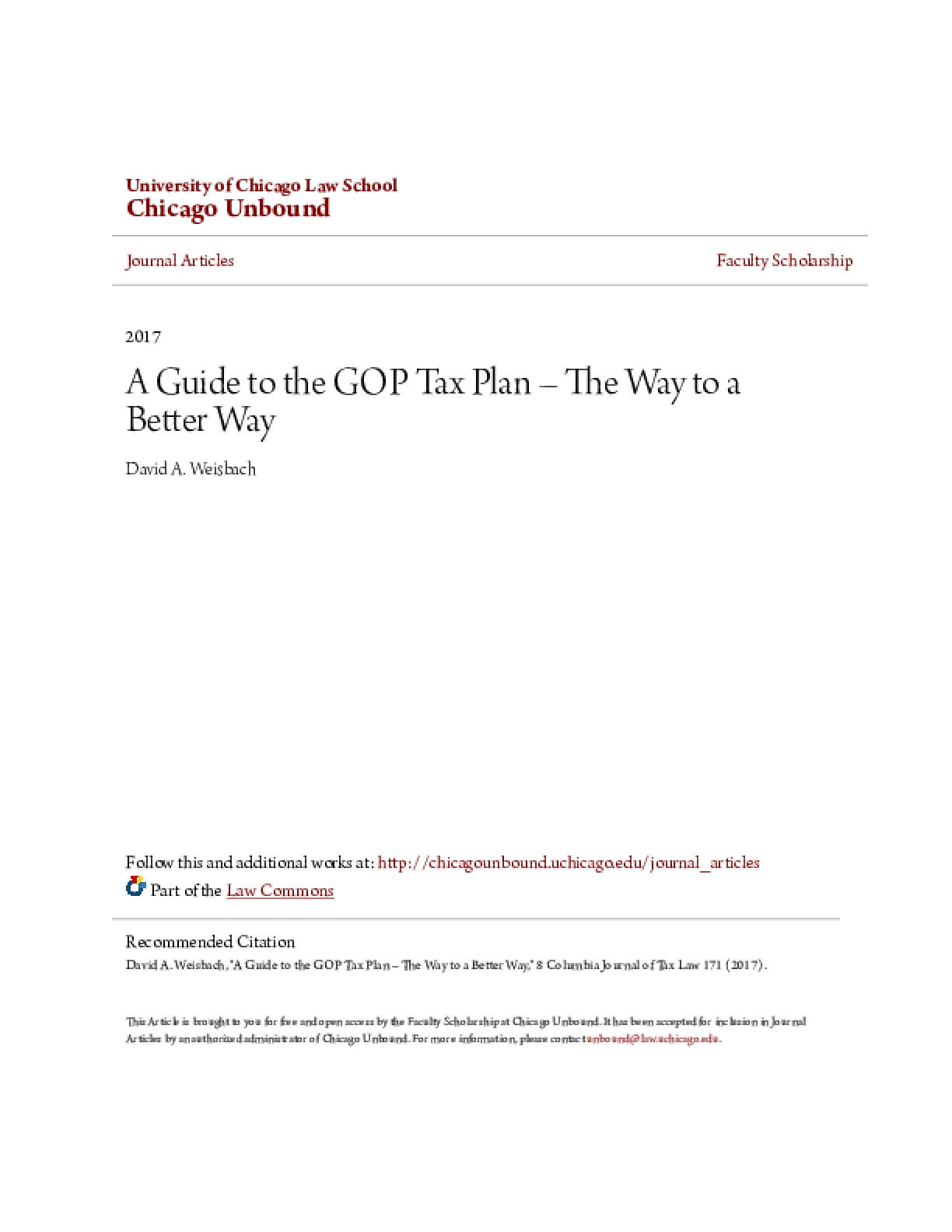