A Matter of Trust: Why Congress Should Turn Federal Lands into Fiduciary Trusts

The Forest Service, Bureau of Land Management, National Park Service, and Fish and Wildlife Service collectively manage well over a quarter of the land in the United States. Although everyone agrees that the lands and resources managed by these agencies are exceedingly valuable, the lands collectively cost taxpayers around $7 billion per year. Several Cato Institute studies have called for privatization of the public lands, but this idea is strongly resisted by environmentalists, recreationists, and other users of public land. An alternative policy that will both enhance the values sought by environmentalists and improve the fiscal management of the lands is to turn them into fiduciary trusts. Under this proposal, the U.S. would retain title to the lands, but the rules under which they would be governed would be very different. Fiduciary trusts are based on hundreds of years of British and American common law that ensures that trustees preserve and protect the value of the resources they manage, keep them productive, and disclose the full costs and benefits of their management. For trust law to apply, public land trusts must be based on a law written by Congress that clearly defines the trustees, the beneficiaries, and a specific mission or missions for the trusts. Congress should create two types of trusts. Market trusts would have a mission of maximizing revenue while preserving the productive capacity of the land. To achieve this mission, Congress should allow them to charge fair market value for all resources. Nonmarket trusts would have a mission of maximizing the preservation and, as appropriate, restoration of natural ecosystems and cultural resources on the public lands. Each pair of market and nonmarket trusts would jointly manage all federal lands in one of about a hundred ecoregions. Each ecoregion would have about 5 to 10 million acres of federal land that might include forests, parks, refuges, and other public lands. Trustees would be elected by a friends' association that anyone would be welcome to join. Trusts would be funded out of the user fees they collect, with some retained by the market trust and some given to the nonmarket trust. In some cases, excess user fees would be returned to the U.S. Treasury. The trust idea would significantly improve both fiscal and environmental management of the public lands. Congress should begin to implement this idea by testing it on selected national forests, parks, and other federal lands. 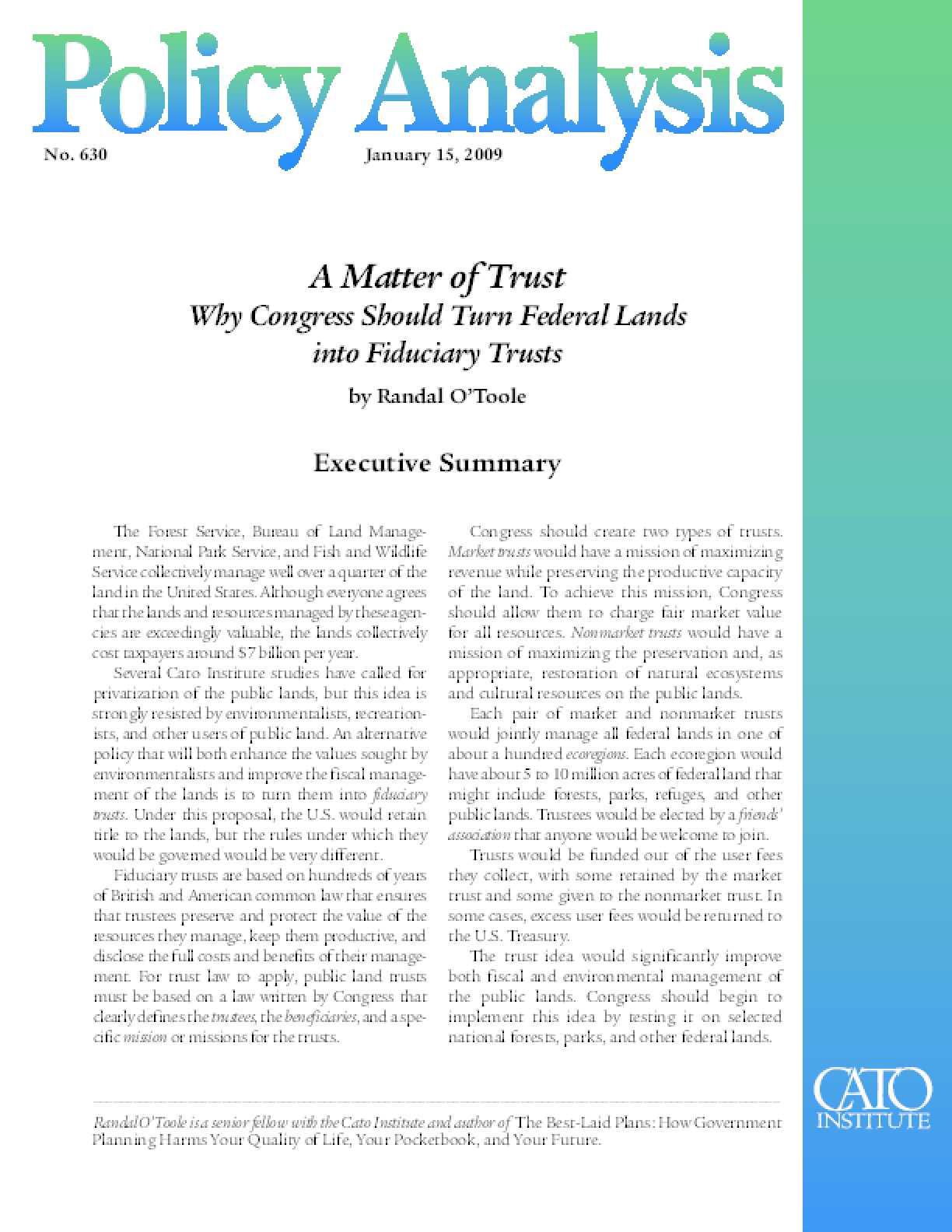