A New GI Bill: Rewarding our Troops, Rebuilding our Military

In 1944, President Franklin Delano Roosevelt signed the original GI Bill, ensuring that eight million combat veterans coming home from Germany and Japan would be able to afford an education. Called the "Servicemen's Readjustment Act," the World War II GI Bill covered tuition, fees, and books, and gave veterans a living stipend while they were in school. Presidents Gerald Ford and George H.W. Bush, Senators Bob Dole and Patrick Moynihan, and authors Norman Mailer and Frank McCourt all relied on the GI Bill. Experts have argued that the GI Bill "reinvented America" after a half-decade of war. Indeed, a 1988 Congressional study showed that every dollar spent on educational benefits under the original GI Bill added seven dollars to the national economy in terms of productivity, consumer spending and tax revenue. But in his signing statement, President Roosevelt spoke more simply: "[The GI Bill] gives emphatic notice to the men and women in our armed forces that the American people do not intend to let them down." Today, 1.5 million troops are returning from Iraq and Afghanistan to a very different future than the one FDR made possible for the Greatest Generation. The current educational benefits offered to veterans are far lower than the original GI Bill. Today, after paying a nonrefundable contribution from their first military paychecks, troops can receive a total of up to $39,600 towards their education. Unfortunately, this covers only 60-70% of the average cost of four years at a public college or university, or less than two years at a typical private college. In addition, structural problems and bureaucratic delays discourage veterans from using their GI Bill benefits. National Guardsmen and Reservists, including those who have served multiple combat tours, typically receive only a fraction of their GI Bill benefits. Moreover, 30% of troops who pay the nonrefundable $1,200 contribution do not end up using the GI Bill at all. These veterans have paid the government $230 million, but received nothing in return. Today's veterans deserve a real reintegration program to help adjust to the civilian world. At the same time, a renewed GI Bill is a practical answer to the military's troop shortage. Despite investing $4 billion dollars in recruiting annually, the military has had serious problems recruiting high-caliber personnel. The Pentagon has responded by lowering age, education, and aptitude standards for new recruits, as well as upping the number of recruiters and increasing enlistment bonuses. These stop-gap measures will not address long-term problems with recruiting, especially as the overall size of the Armed Forces is expanded. Rather than continuing to spend billions in bonuses for lower-standard enlistees, increasing GI Bill benefits would encourage high-aptitude young people to join the military. The GI Bill is the military's single most effective recruitment tool; the number one reason civilians join the military is to get money for college. As our military recovers and resets in the coming years, an expanded GI Bill will play a crucial role in ensuring that our military remains the strongest and most advanced in the world. 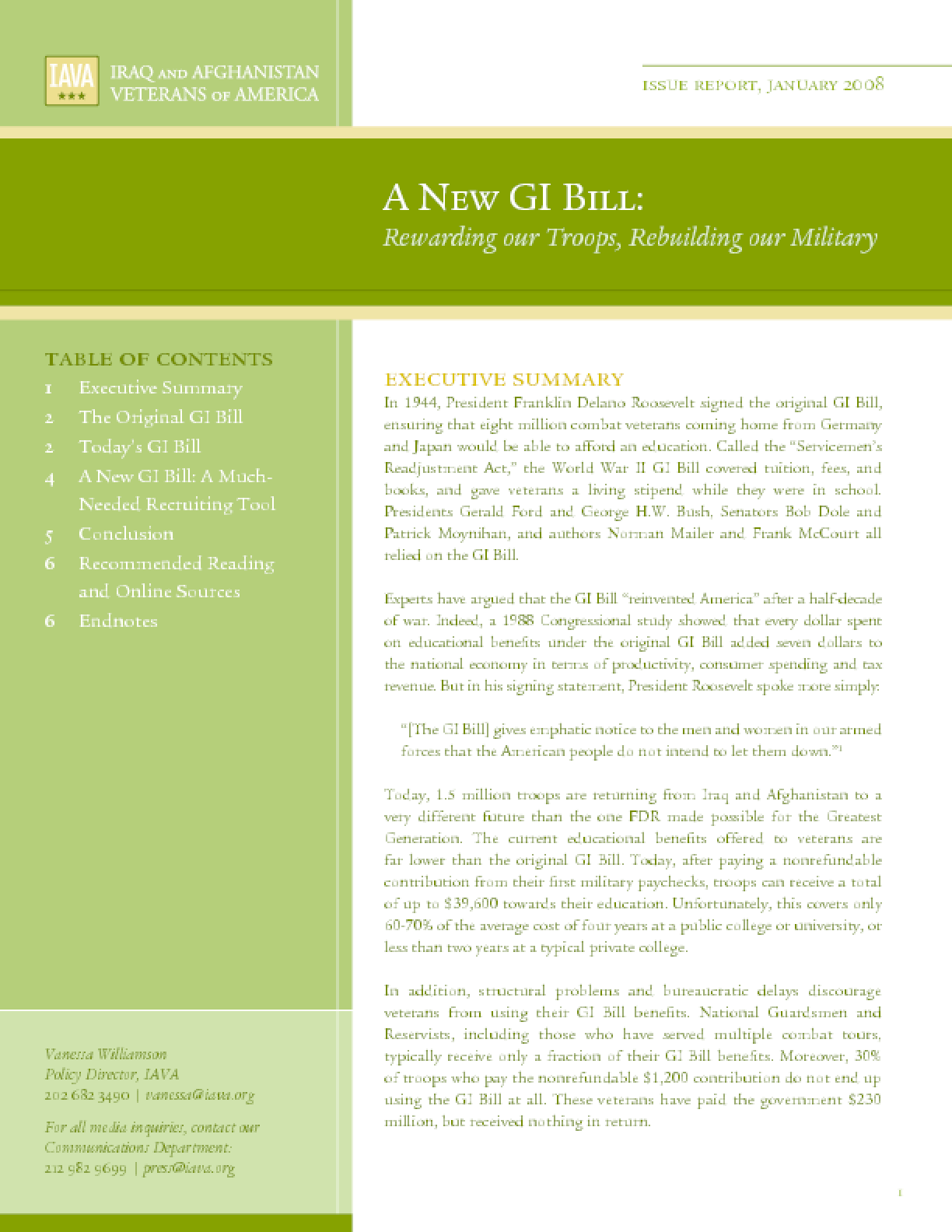