A Survey of LGBT Americans: Attitudes, Experiences and Values in Changing Times

An overwhelming share of America's lesbian, gay, bisexual and transgender adults (92%) say society has become more accepting of them in the past decade and an equal number expect it to grow even more accepting in the decade ahead. They attribute the changes to a variety of factors, from people knowing and interacting with someone who is LGBT, to advocacy on their behalf by high-profile public figures, to LGBT adults raising families. At the same time, however, a new nationally representative survey of 1,197 LGBT adults offers testimony to the many ways they feel they have been stigmatized by society. About four-in-ten (39%) say that at some point in their lives they were rejected by a family member or close friend because of their sexual orientation or gender identity; 30% say they have been physically attacked or threatened; 29% say they have been made to feel unwelcome in a place of worship; and 21% say they have been treated unfairly by an employer. About six-in-ten (58%) say they've been the target of slurs or jokes. Also, just 56% say they have told their mother about their sexual orientation or gender identity, and 39% have told their father. Most who did tell a parent say that it was difficult, but relatively few say that it damaged their relationship. The survey finds that 12 is the median age at which lesbian, gay and bisexual adults first felt they might be something other than heterosexual or straight. For those who say they now know for sure that they are lesbian, gay, bisexual or transgender, that realization came at a median age of 17.Among those who have shared this information with a family member or close friend, 20 is the median age at which they first did so. Gay men report having reached all of these coming out milestones somewhat earlier than do lesbians and bisexuals. The survey was conducted April 11-29, 2013, and administered online, a survey mode that research indicates tends to produce more honest answers on a range of sensitive topics than do other less anonymous modes of survey-taking. The survey finds that the LGBT population is distinctive in many ways beyond sexual orientation. Compared with the general public, Pew Research LGBT survey respondents are more liberal, more Democratic, less religious, less happy with their lives, and more satisfied with the general direction of the country. On average, they are younger than the general public. Their family incomes are lower, which may be related to their relative youth and the smaller size of their households. They are also more likely to perceive discrimination not just against themselves but also against other groups with a legacy of discrimination. 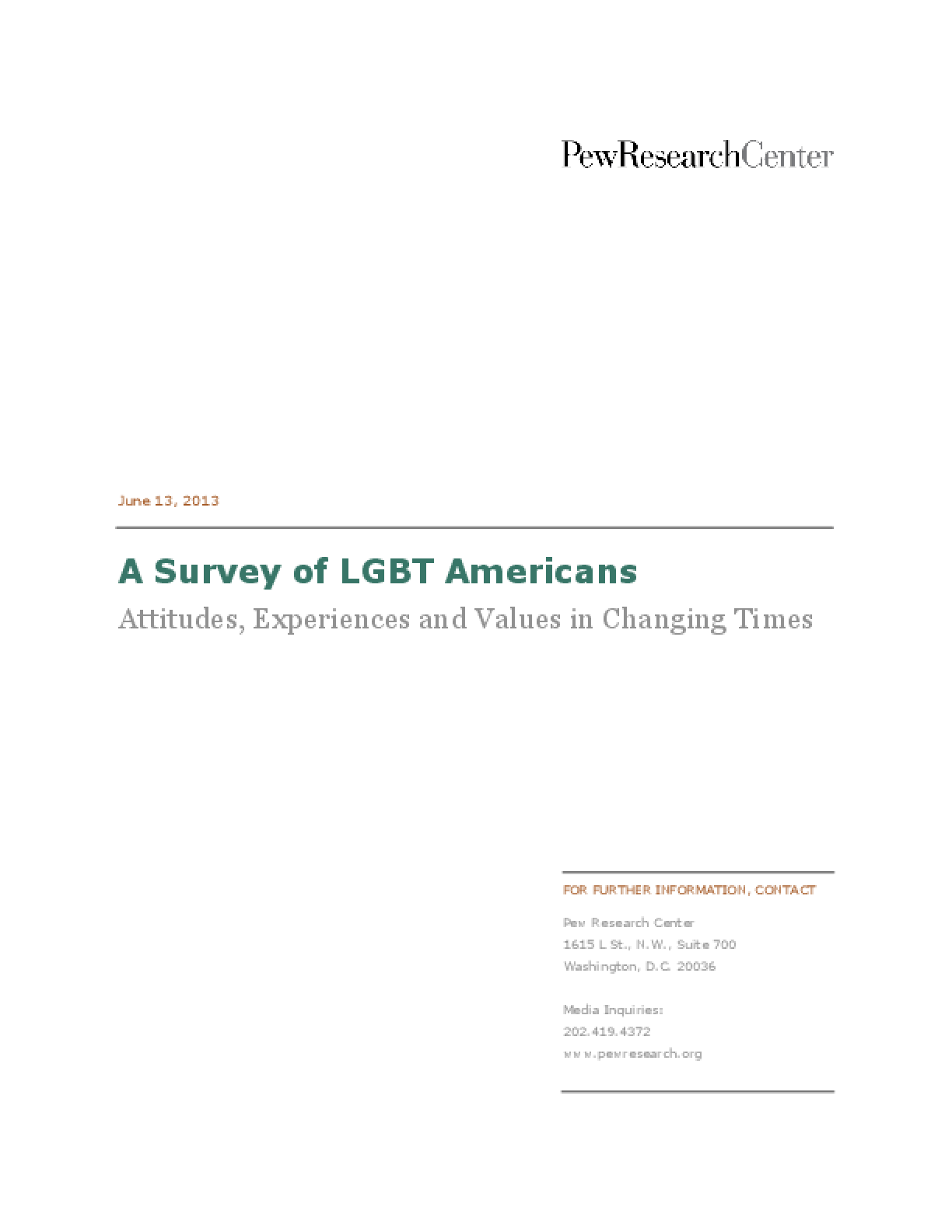