After a Parent Left Employment, One in Five Children Lost Private Insurance

Parental job loss is an important trigger for a child's loss of private health insurance. For example, research shows that parental loss of full-time employment doubles the odds that a child will lose private health insurance. Until the 1990s, substantial numbers of children lacked health insurance, but with the enactment of the Children's Health Insurance Program (CHIP) in 1997, followed by changes to Medicaid and CHIP's 2009 reauthorization, children's health insurance coverage was expanded through broader eligibility, enrollment simplifications, and outreach efforts. From 1997 to 2012, the share of children without insurance fell from 14 percent to 7 percent.

The growth of public coverage for children notwithstanding, private coverage is still the primary form of children's health insurance. In 2014, 59 percent of children received coverage from private health insurance. But coverage has become less consistent for some children, due to an overall decline in employer-provided private-sector coverage, an increase in switching between public and private sources, and low public health insurance renewal rates. Even brief gaps in health insurance produce adverse consequences for children, including fewer medical provider visits over the course of a year, the loss of a primary health care provider, difficulty getting preventive and specialized medical care, and the increased use of emergency department and inpatient hospital visits. Loss of employer-based coverage leads to instability in health insurance, gaps in coverage, and more unmet health care needs.

This brief focuses on children's loss of private health insurance after a parent left his or her job voluntarily or involuntarily between May 2008 and the end of 2012 (see Box 1 for definitions). The number of uninsured children declined steadily throughout this period, and experts project that some of the provisions of the Patient Protection and Affordable Care Act (ACA) of 2010 will foster a continued decline in the percentages of children without health insurance over the long term. For most of the period under study, many ACA provisions that have likely served to expand coverage—the mandate that persons obtain health insurance, the state option to expand Medicaid to reach more families, the provision of federal subsidies to purchase coverage, and the ACA requirement for states to transition coverage of children up to 138 percent of the federal poverty line from CHIP to Medicaid—had not yet gone into effect. But since most children are still covered under private health insurance plans, the majority of which are linked to the parents' employment, understanding the relationship and the characteristics of children who are unlikely to remain covered after a parent leaves his or her job may help identify ways to preserve consistency in coverage. For example, health care providers, administrators, and policy makers can keep watch to ensure that eligible children are quickly connected with public sources of coverage. 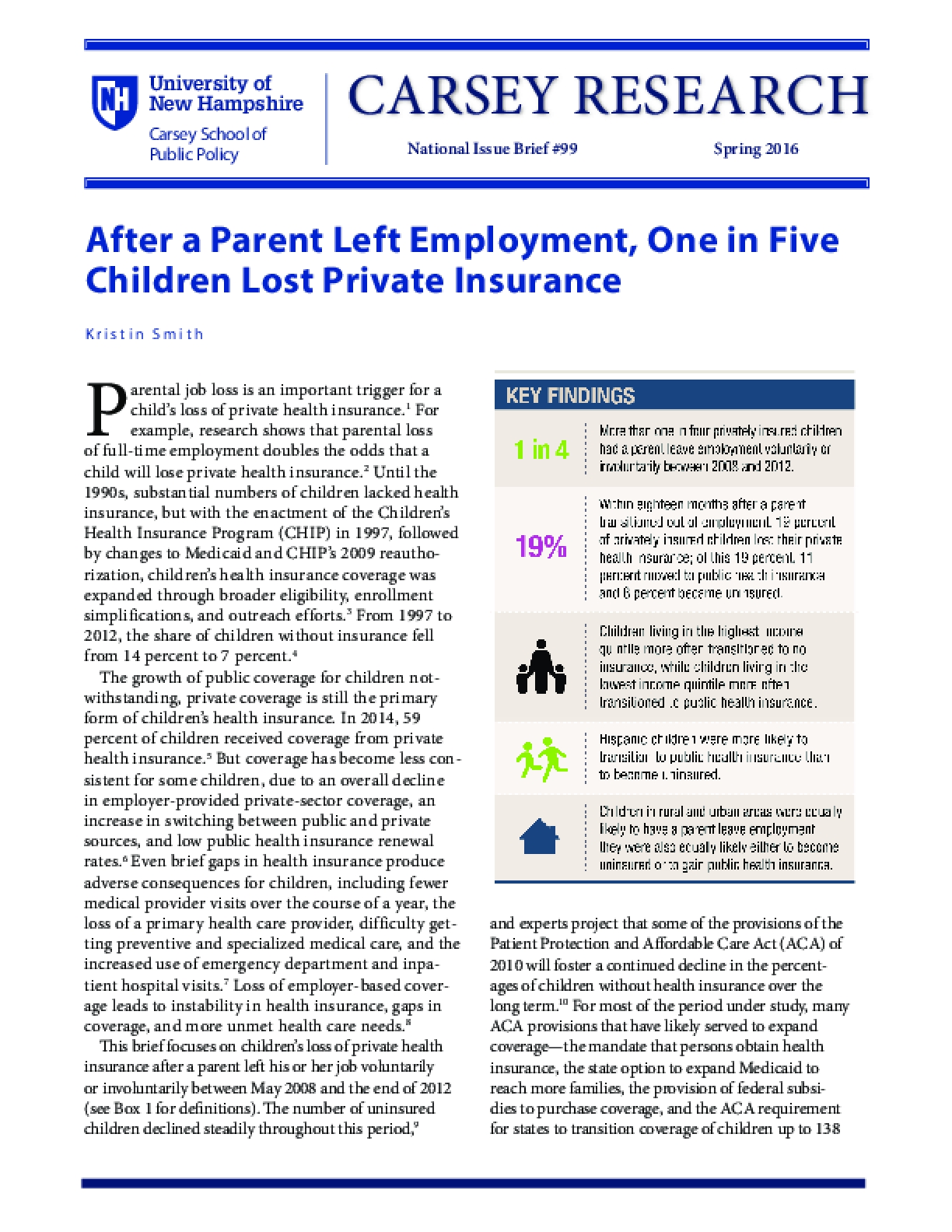