After the Authorization for Use of Military Force

by Jennifer Daskal; Stephen I. Vladeck

This paper offers an alternative vision for the future of U.S. counterterrorism policy in which use-of-force authorizations are a last, rather than first, resort.

On September 18, 2001, one week after the deadliest terrorist attacks in U.S. history, President George W. Bush signed into law the Authorization for Use of Military Force (AUMF). The AUMF authorized the President: to use all necessary and appropriate force against those nations, organizations, or persons he determines planned, authorized, committed, or aided the terrorist attacks that occurred on September 11, 2001, or harbored such organizations or persons, in order to prevent any future acts of international terrorism against the United States by such nations, organizations or persons.

Although its delegation of power to the president was sweeping, the AUMF in fact reflected a compromise between Congress and the Bush Administration—which had sought an even broader and more open-ended grant of authority. Even as fires continued to burn at Ground Zero, Congress pushed back, only authorizing military force against those who could be tied to the groups directly responsible for the September 11 attacks. Despite widespread misrepresentations to the contrary, Congress pointedly refused to declare a "war on terrorism." Instead, the use of force Congress authorized was to be directed at those who bore responsibility for the 9/11 attacks— namely al Qaeda and the Taliban. It was also for a specific purpose: preventing those "nations, organizations, or persons" responsible for the September 11 attacks from committing future acts of terrorism against the United States.

A dozen years later, the AUMF remains the principal source of the U.S. government's domestic legal authority to use military force against al Qaeda and its immediate associates, both on the battlefields of Afghanistan and far beyond. But even as the statutory framework has remained unchanged, the facts on the ground have evolved dramatically: The Taliban regime in Afghanistan—behind which al Qaeda had taken refuge—has been removed from power; those individuals most directly responsible for the September 11 attacks have been incapacitated; and, perhaps most importantly, the "core" of al Qaeda has been "decimated. " With the drawdown of U.S. troops in Afghanistan continuing apace, we are getting closer to the day when the AUMF will have served its purpose and the United States will no longer be engaged in an ongoing armed conflict with the Taliban or al Qaeda.

Given the evolving sophistication of ordinary U.S. law enforcement and intelligence-gathering tools over the past decade, along with the U.S. president's settled powers under both domestic and international law to use military force in self-defense, the burden should be on those seeking additional use-of-force authority to demonstrate why these existing capacities are inadequate. And even then, any use-of- force authority should be enacted by Congress only after public debate and extensive deliberation, carefully calibrated to the specific threat posed by an identifiable group, and limited in scope and duration, so as to avoid making the very mistake that Congress so assiduously sidestepped after September 11.

In short, the paper calls for a new framework statute to replace the Authorization for Use of Military Force (AUMF) are unnecessary, provocative, and counterproductive—perpetuating war at a time when we should be seeking to end it. Congress certainly may choose, as it did in the AUMF, to authorize the use of military force against specific, organized groups so as to address an established and sustained threat that existing authorities are inadequate to quell. But until and unless the political branches identify a group that poses such a threat, the many other counterterrorism tools at the government's disposal—including law enforcement, intelligence-gathering, capacity-building, and, when necessary, self-defense capabilities provide a much more strategically sound—and legally justifiable—means of addressing the terrorist threat.

In the paper, we provide background on the AUMF and its interpretation over time, explain why the Hoover proposal and other calls for an expanded AUMF are unnecessary and unwise, and outline three alternative approaches for the next generation of U.S. counterterrorism policy. 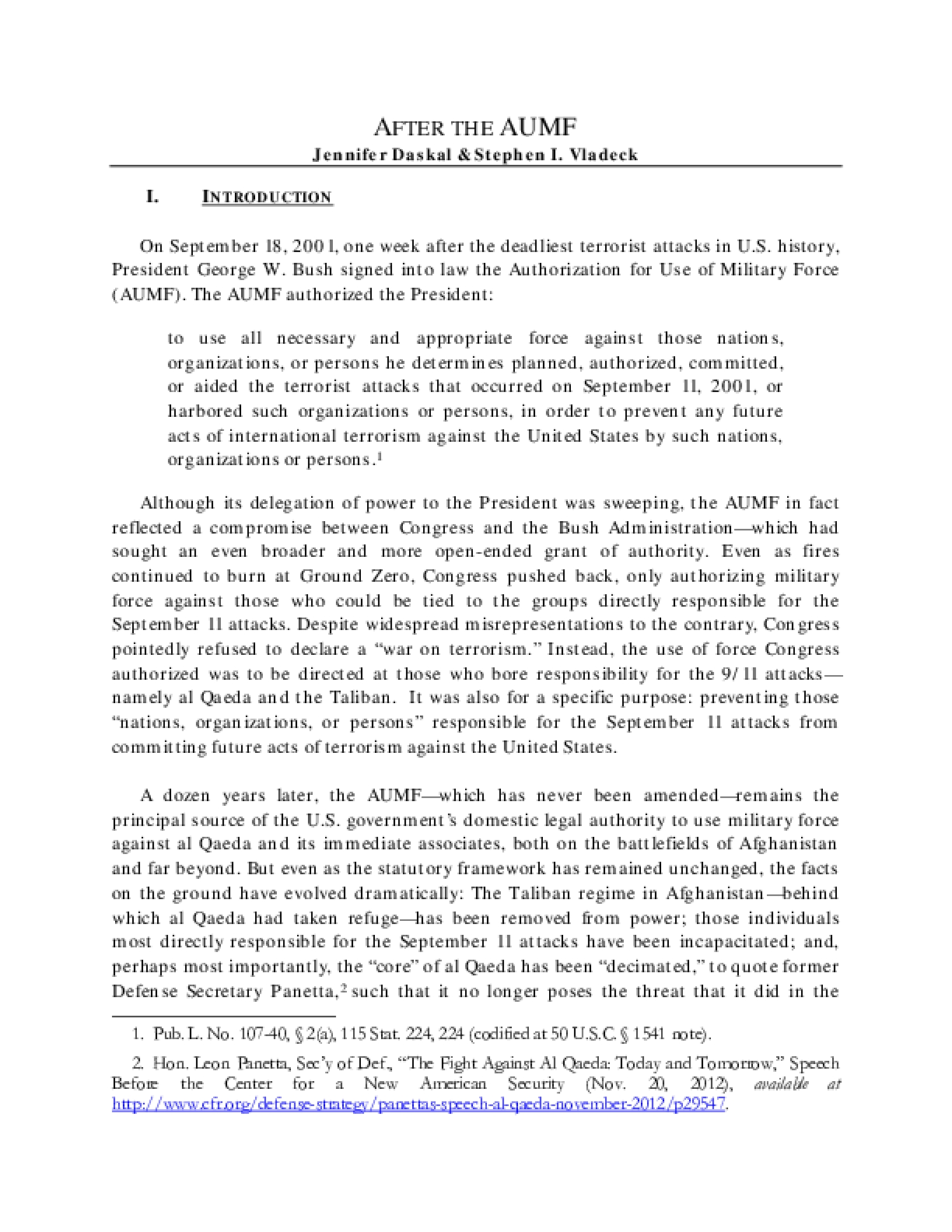