More than 1.5 million troops have served in Iraq and Afghanistan. 30,000 troops are counted among those wounded in action. But hundreds of thousands of others have suffered injuries not recorded in the official tally, including the many veterans with serious mental health problems. These veterans are overwhelming the military and veterans' health care and disability systems. As a result, hundreds of thousands of wounded troops and veterans are being forced to wait months and even years for medical appointments and disability compensation. Some veterans with serious mental health problems have committed suicide while waiting for counseling, and others have fallen into debt awaiting compensation from the military or Department of Veterans Affairs (VA). A major cause of the delays is the maze of paperwork that troops and veterans must navigate to get care or benefits. The military and the VA have separate health care systems and separate disability benefits systems, each with an exceptionally complicated and confusing bureaucracy. The medical care offered through the Department of Defense (DOD) is some of the most advanced in the world. But some wounded troops are suffering delays in treatment because the military does not use a consistent digital medical records system. Moreover, troops too wounded to continue their service must chaperone complicated paperwork through an arduous and confusing process of medical evaluation. Some veterans' advocates believe the Army is taking advantage of troops' confusion to lower disability ratings and save money. According to the Dole-Shalala Commission tasked with addressing the problems faced by troops at Walter Reed, less than 40% of wounded troops say they are satisfied with the disability evaluation system. For those who have left military service, the Veterans Affairs system can provide health care and benefits. Unfortunately, the transition from the DOD to the VA is far from seamless. Crucial DOD paperwork, including medical records and military service records, regularly gets lost in the shuffle from DOD to VA. Moreover, the transition from top-echelon military hospitals to a local VA facility can mean a reduced standard of care. Changes to VA eligibility rules have restricted access to VA health care and contributed to the 1.8 million veterans who lack health insurance. But even for those veterans with access to the VA system, delays and bureaucratic hurdles are commonplace. High demand has created a huge backlog for mental health treatment, making care "virtually inaccessible" at some clinics, according to at least one high-ranking VA official. The VA disability benefits system is also massively backlogged. There are about 400,000 pending disability claims, including 83,000 that have been waiting six months or more. The average wait-time for a disability claim is 183 days, or about six months. For claims that are appealed, the wait-time skyrockets to 657 days, or almost two years. Despite the backlog, the VA's claims processing staff has not substantially increased. In the meantime, veterans too wounded to work are often unable to support themselves or their families. The public outrage over bureaucratic neglect and shoddy conditions at Walter Reed Army Medical Center shined a light on the many problems facing wounded troops and veterans. A wide array of recommendations has been made, but whether these solutions will be effectively implemented remains to be seen. 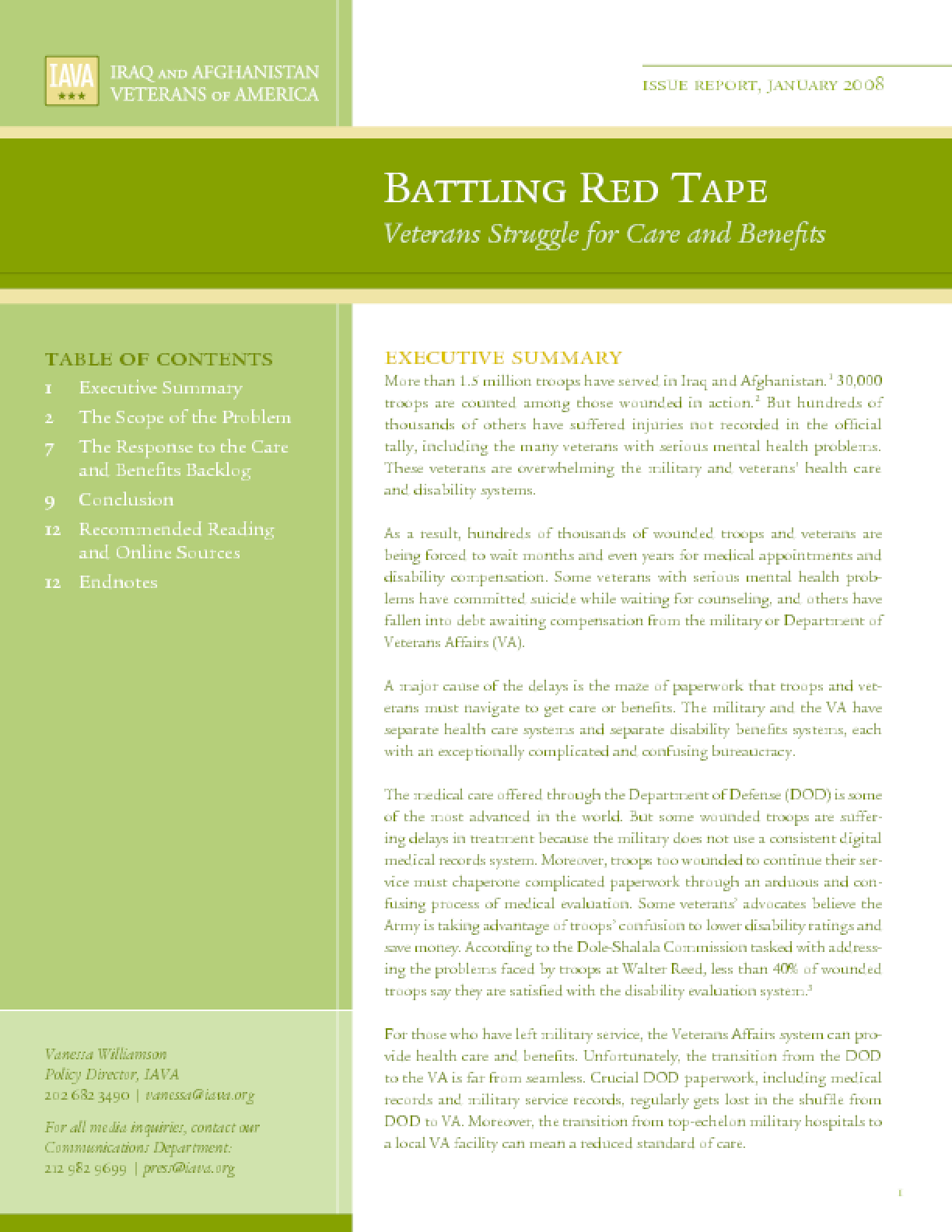