Between Hope and Fear in Northern Uganda: Challenges on the ground and urgent need for peace

Uganda is at a critical point in its history. After over 20 years of cyclical conflict between the Lord's Resistance Army (LRA) and the government of Uganda, the Cessation of Hostilities (CoH) agreement signed on 26 August 2006 and last extended on 16 December 2006 has given new hope to conflict affected communities that peace may finally prevail. While there is no explicit deadline to the agreement, the signatories agree that the "implementation of the agreement shall be reviewed at the end of February 2007". There is widespread fear in affected communities that this could signal a lapse in the agreement and a return to violence. As negotiations appear to be at an impasse it is vitally important that the parties come together as soon as possible to reaffirm their commitment to the ceasefire. Peace talks must be resumed before it is too late and the apparent deadlock reaches the point of no return. The victims of the conflict, many of whom have spent their whole lives in camps for internally displaced persons (IDPs), are eager to return to their land to restart a normal life. The respite in fighting has encouraged an estimated 300 0001 internally displaced people to return home or to move from crowded camps into designated sites closer to, or in most cases even within, their areas of origin. However, uncertainty over the prospects for peace stops many people leaving the camps. About 1.3 million people remain displaced, living in squalid camps without proper access to safe water and sanitary facilities. Those who moved to new sites endorsed by the district authorities, or returned home, now struggle with the poor conditions there. They remain dependent on food from the World Food Programme. New sites often do not have safe and clean water, schools, and health centres. Sometimes they do not have military protection from potential LRA attacks. Nine months of respite from fighting has given the victims of the conflict a chance to begin a process of recovery. However, the problems they encounter are only surmountable with the full support of their government and the international community. Civil Society Organisations for Peace in Northern Uganda (CSOPNU), a coalition of 65 national and international NGOs operational in northern Uganda, calls on the government of Uganda, the LRA and the International Community not to betray the hopes of Ugandans that talks will deliver a just and lasting peace, and to urgently provide the protection and support necessary for the affected communities to begin to rebuild their lives. 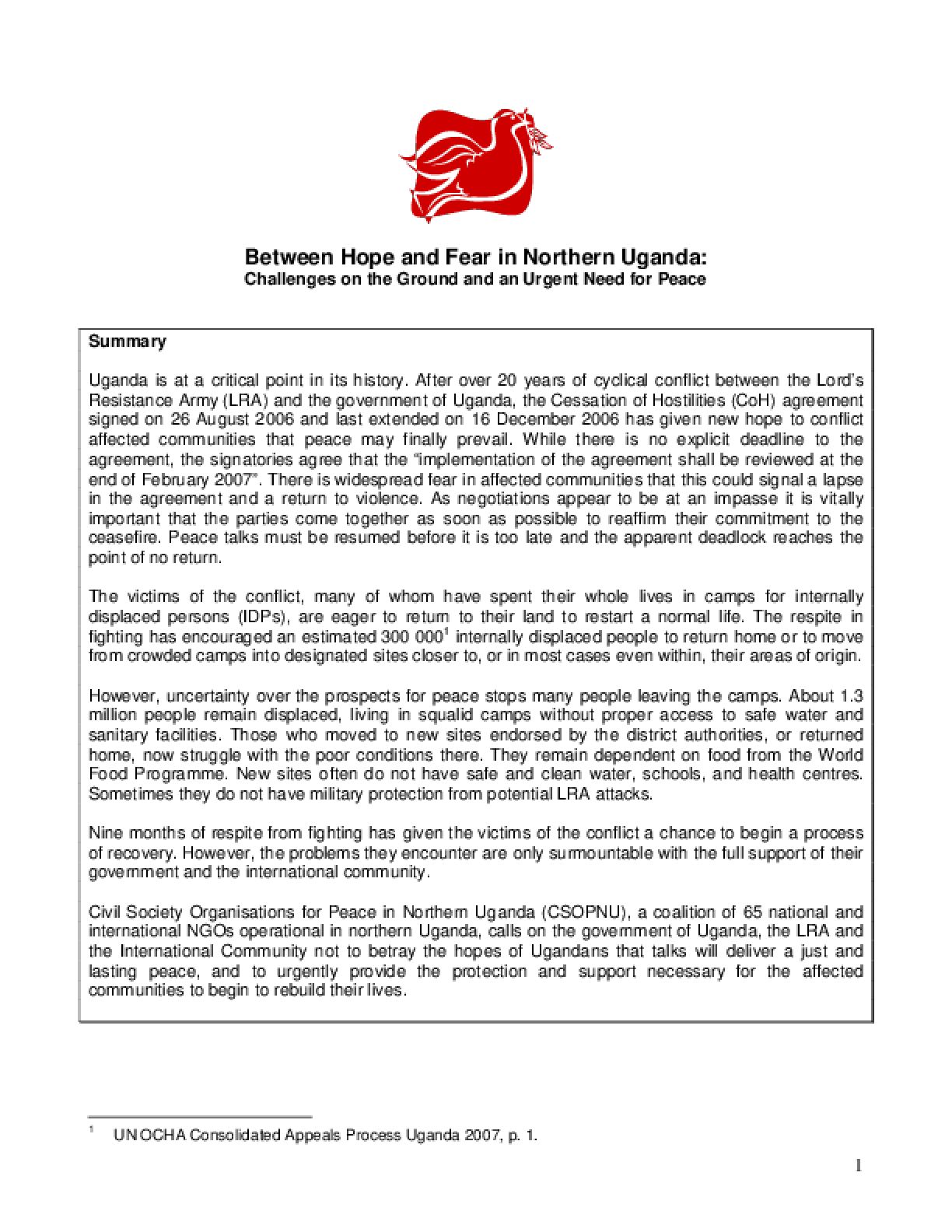