"Billion Dollar Bets" to Create Economic Opportunity for Every American

The American Dream--the notion that if you "work hard and play by the rules," you will improve your lot in life--has become impossible for Americans to achieve. That was the conclusion of nearly six out of ten people who responded to a June 2014, CNNMoney poll. In a December 2015 Harvard Institute of Politics' survey of millennials, nearly half pronounced the American Dream "dead."Given the fact that social mobility in the United States has largely remained stagnant for more than 30 years, many people doubt there's a better economic future for themselves and their children. Indeed, it will take a sustained effort to restore economic opportunity for all Americans. But according to research by The Bridgespan Group, reports of the American Dream's demise just might be premature.Drawing from an extensive research base--as well as dozens of interviews with experts and practitioners and the diverse perspectives of an advisory board--a Bridgespan team embarked on an effort to map out "what matters most" to increase upward economic mobility for millions of low-income Americans. (Learn more about our research effort in the Overview of Research.)The team identified an array of on-the-ground interventions that are already building pathways to the middle class, as well as promising innovations that are just beginning to emerge. The results of that investigation can be found in this report, "Billion Dollar Bets" to Create Economic Opportunity for Every American.We framed our research around this question: "How could a philanthropic investment of $1 billion dramatically increase upward social mobility for low-income individuals and families?" With access to capital that is flexible and adaptable, philanthropists are uniquely positioned to put social mobility on an upward trajectory. Roughly 80 percent of the largest donors aspire to impel social change, but just 20 percent of philanthropic investments above $10 million went to social-change organizations between 2000 and 2012. Philanthropists have lacked the sightlines into shovel-ready projects and they've lacked the confidence that large investments would actually impact the economic lives of many people.Our intent was to create a series of roadmaps that illustrate how investments of $1 billion might improve the lifetime earnings of millions of low-income Americans. We began by identifying four promising areas where large investments of private capital would likely catalyze population-level change.We then evaluated scores of concepts for restoring the meritocratic ideal to many more Americans. Working with our advisory board, we selected 15 of those concepts as illustrative "big bets" that span the four investment areas. To get a better understanding of the promise and pitfalls that come with any attempt to take on the social mobility challenge, we took a deeper dive into six of the proposed bets: 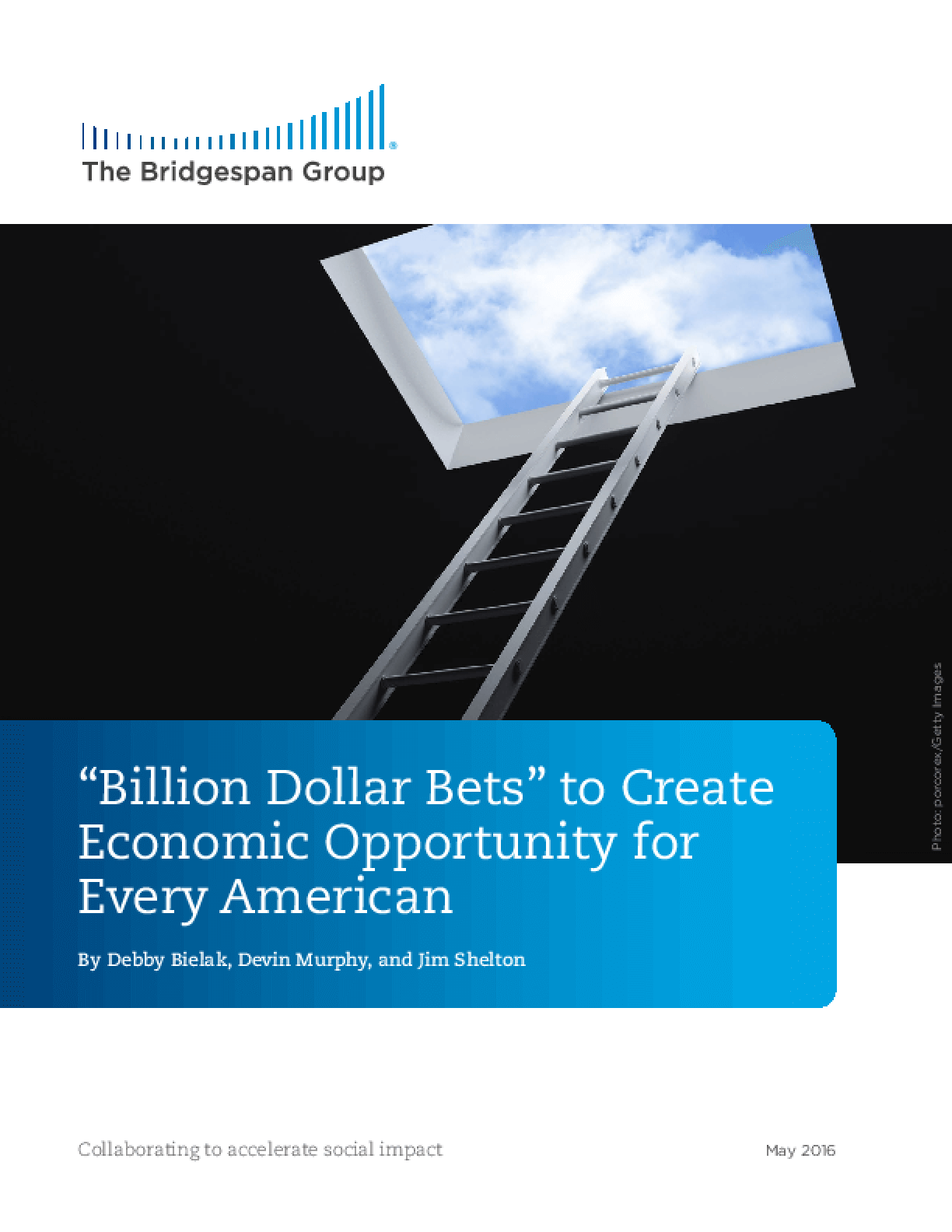