by Walter A. Ewing

Since 9/11, concern has mounted among policymakers and law-enforcement authorities that foreign terrorists affiliated with al Qaeda might use Mexico as a transit point to enter the United States, relying on the same peoplesmuggling networks as undocumented immigrants and becoming lost in the large undocumented flow. Some lawmakers have voiced fears that terrorists might be among the growing number of undocumented non-Mexicans crossing the southern border, although these Other Than Mexicans (OTMs) come principally from Central and South America. There is no evidence this has happened, despite suggestions by several lawmakers that the extremely small number of Arab and Muslim OTMs apprehended at the border constitutes a threat to national security. Ironically, the U.S. government's efforts to stem undocumented immigration by fortifying the U.S.-Mexico border have increased the profitability of the people-smuggling business and fostered greater sophistication in the smuggling networks through which a foreign terrorist might enter the country. U.S. national security would be better servedif undocumented labor migration were taken out of the border-security equation by reforming the U.S. immigration system to accommodate U.S. labor demand. In the process, fewer immigrants would try to enter the country without authorization, the market for people smugglers would be undercut, and foreign terrorists would be deprived of the large undocumented flows and smuggling infrastructure that might aid their entry into the United States. Moreover, the U.S. Border Patrol could focus more on finding terrorists and less on apprehending jobseekers. Among the findings of this report: Immigrant smuggling across the U.S.-Mexico border is a growth industry. The share of undocumented immigrants apprehended along the southern border who reportedly were smuggled into the United States rose from 5.5 percent in Fiscal Year (FY) 1992 to 22.2 percent in FY 2004. The OTM share of apprehensions along the U.S.-Mexico border rose from 1.1 percent in FY 1997 to 5.8 percent in FY 2004 and then, according to preliminary estimates, spiked to 13.2 percent in FY 2005. More than three-quarters of OTMs are from Honduras, El Salvador, and Guatemala. The largest increases in OTM apprehensions at the southern border since 1998 have occurred among citizens of Honduras, El Salvador, and Brazil, none of which is a likely source of terrorists bent on attacking the United States. From FY 1999 through FY 2004, apprehensions along the U.S.-Mexico border of OTMs from Middle Eastern, North African, and South Asian countries of "special interest" to national security amounted to only 0.02 percent of all apprehensions and 0.7 percent of all OTM apprehensions. The number of such apprehensions declined after 2001. Until lawmakers create new avenues for both permanent and temporary immigration that are realistic and flexible, U.S. national security will continue to be undermined by border-enforcement efforts that divert labor migration through undocumented channels and into the hands of people smugglers. 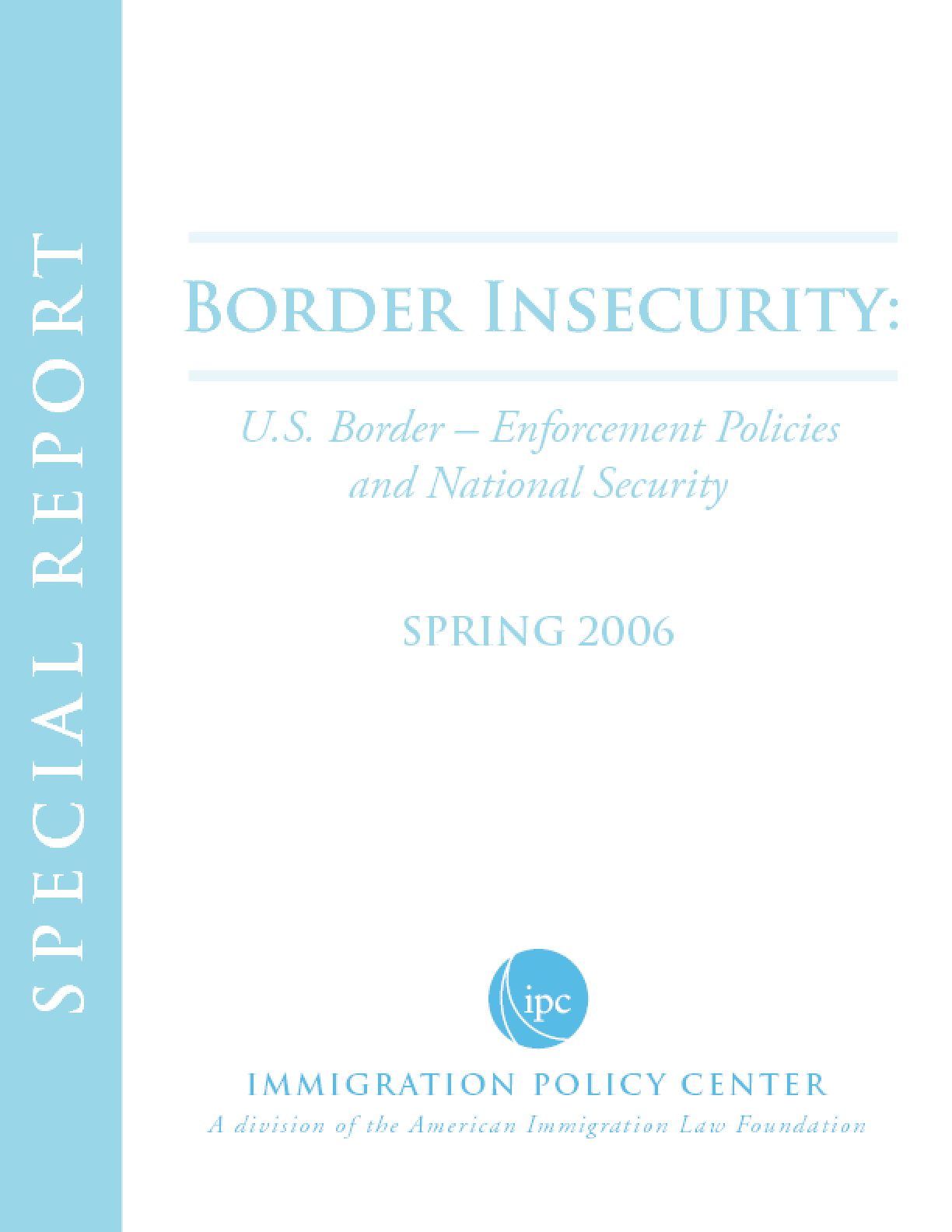