Characteristics of Federally Licensed Firearms Retailers and Retail Establishments in the United States: Initial Findings from the Firearms Licensee Survey

Firearms have widely supported legitimate purposes but are also frequently used in violent crimes. Owners and senior executives of federally licensed firearms dealers and pawnbrokers are a potentially valuable source of information on retail commerce in firearms, links between legal and illegal commerce, and policies designed to prevent the firearms they sell from being used in crimes. To our knowledge, there has been no prior effort to gather such information. In 2011, we conducted the Firearms Licensee Survey on a probability sample of 1,601 licensed dealers and pawnbrokers in the United States believed to sell 50 or more firearms per year. This article presents details of the design and execution of the survey and describes the characteristics of the respondents and their business establishments. The survey was conducted by mail, using methods developed by Dillman and others. Our response rate was 36.9 % (591 respondents), similar to that for other establishment surveys using similar methods. Respondents had a median age of 54; 89% were male, 97.6% were White, and, 98.1% were non-Hispanic. Those who held licenses under their own names had been licensed for a median of 18 years. A large majority of 96.3% agreed that "private ownership of guns is essential for a free society"; just over half (54.9%) believed that "it is too easy for criminals to get guns in this country." A match between the job and a personal interest in the shooting sports was the highest-ranking reason for working as a firearms retailer; the highest-ranking concerns were that "there are too many 'gun control' regulations" and that "the government might confiscate my guns." Most respondents (64.3%) were gun dealers, with significant variation by region. Residential dealers accounted for 25.6% of all dealers in the Midwest. Median annual sales volume was 200 firearms for both dealers and pawnbrokers. Dealers appeared more likely than pawnbrokers to specialize; they were more likely to rank in the highest or lowest quartile on sales of handguns, inexpensive handguns, and tactical rifles. Sales of inexpensive handguns and sales to women were more common among pawnbrokers. Internet sales were reported by 28.3% of respondents and sales at gun shows by 14.3%. A median of 1% of sales were denied after purchasers failed background checks; firearm trace requests equaled G1 % of annual sales. Trace frequency was directly associated with the percentage of firearm sales involving handguns, inexpensive handguns, and sales to women. Frequency of denied sales was strongly and directly associated with frequency of trace requests (pG0.0001). These results are based on selfreport but are consistent with those from studies using objective data. 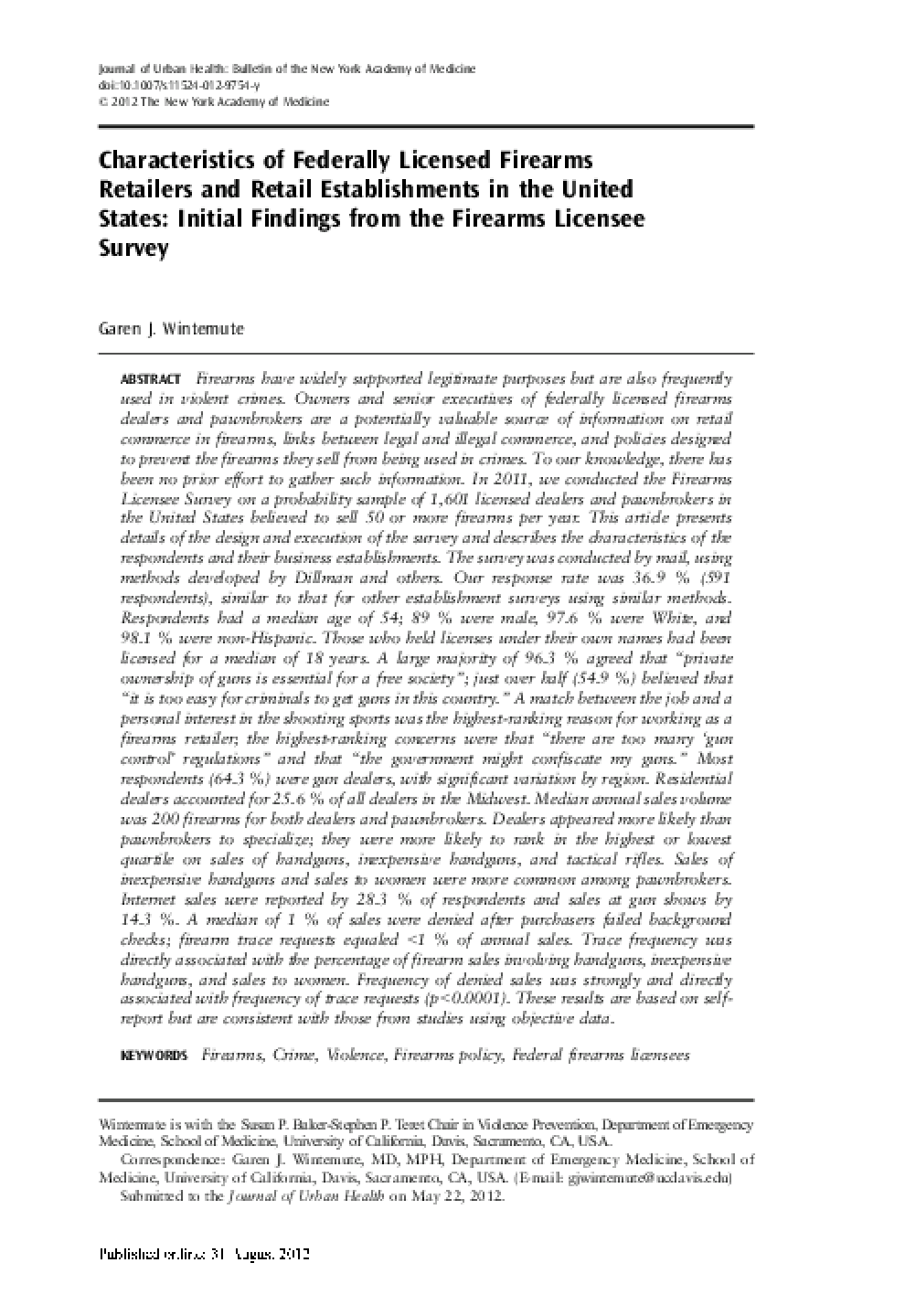