The two-year implementation project of the JCCI City Finances study began in mid-summer 2009, precisely at the time of the "official end" of The Great Recession, which made the City of Jacksonville's financial crisis considerably worse than when the study was launched theprevious fall. As the implementation phase commenced, however, optimism was high that the worst of the worldwide financial downturn was behind us, and with a focused approach to the City's specific problems, significant progress could be realized.

Now, more than two years later, Jacksonville continues to suffer many of the effects of the Great Recession – indeed, for many in our community, it is impossible to distinguish any difference now from conditions at the recession's height. For example, the unemployment rate in Jacksonville remains in double digits; property values continue to decline; foreclosures continue to soar; and per capita income has fallen.

These conditions have made it nearly impossible for Jacksonville to begin digging itself out of its sizable financial hole, particularly since residential and commercial property tax revenues – by far the City's largest single source of revenue – continue to decline. Balancing the City budget over the past two years has largely been an exercise in "treading water." Faced with falling revenues, there simply has not been enough money available to maintain services at previous levels, much less enough to consider expediting a pay down of the soaring unfunded liabilities on the employee pension plans which seriously threaten the City's financial sustainability.

Even with a modest millage rate increase in fiscal years 2010 and 2011, total revenues declined, forcing a reduction in general fund expenditures. The recently approved 2012 budget, balancedwithout any tax or fee increases, required even more belt-tightening in a city that already ranks near the bottom state-wide on the funding of services.

While millage rate and/or fee increases offset this in some years, the full impact is felt in years when no such increases are forthcoming, necessitating accelerated belt-tightening measures that negatively impact city services. Additional revenue is clearly needed, but it isunderstandable that raising taxes and fees can be viewed as unreasonable at a time when unemployment rates are so high and so many citizens are struggling to make ends meet. It remains unclear how long it will be before real estate values begin to rise again, therebyincreasing property tax revenues and providing the City with some much-needed financial flexibility.

In spite of the global economic conditions that have temporarily forestalled progress on most aspects of Jacksonville's financial turn-around, a number of positive steps have been taken over the past two-plus years to address the recommendations in the City Finances study. 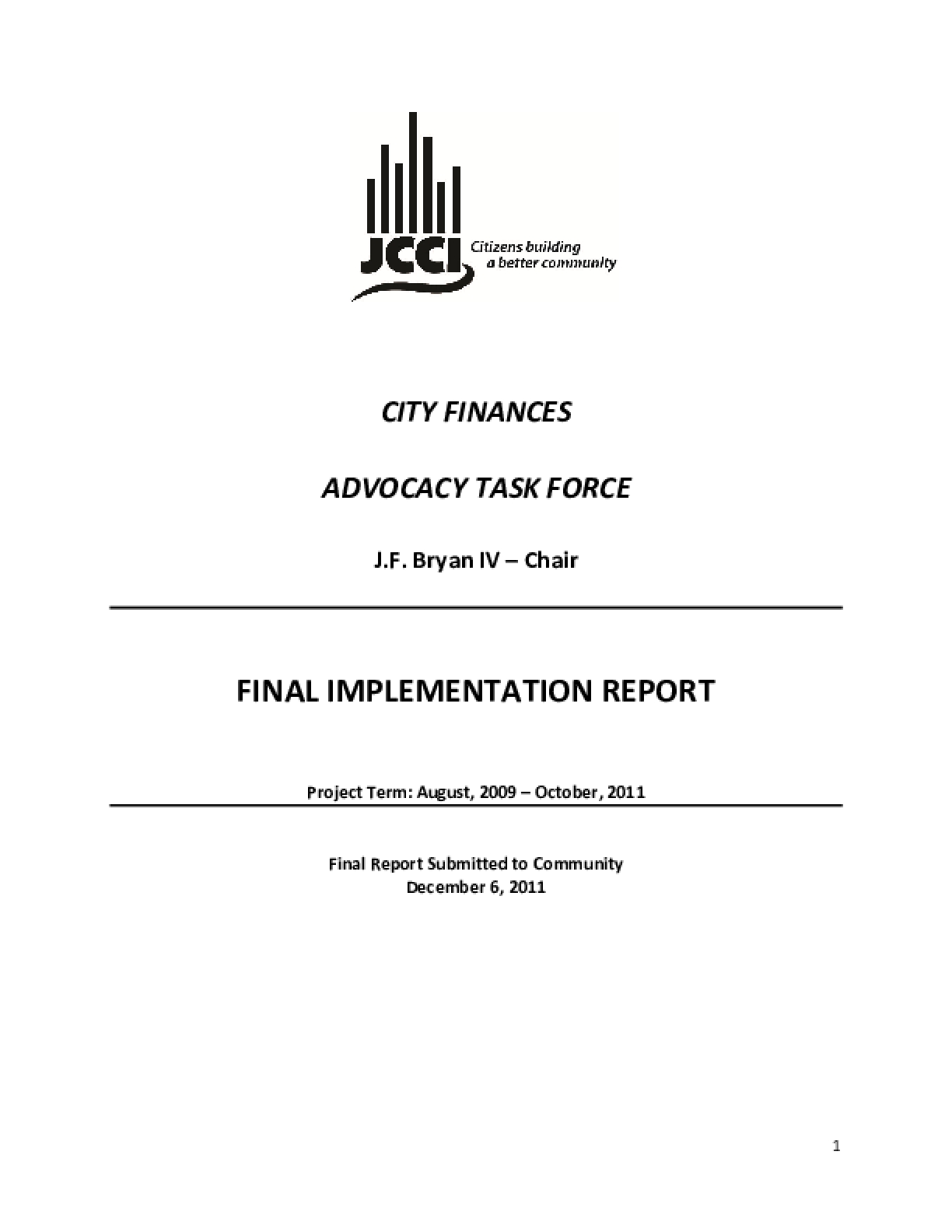