In this policy brief, Allan Odden argues that it may be time to redesign state and district school finance systems to align them more closely to the standards-based education reform movement and the national goal of teaching all students to rigorous performance standards.

Historically, a major focus of the school finance policy debate was the fiscal disparities across school districts within states. These disparities in per-pupil spending were inversely linked to tax efforts and strongly linked to the size of the local property tax base per pupil. Although the strength of the connection between spending and education quality was debated, most policymakers admitted some connection and viewed the overall structure as unfair. Low-property wealth districts were doubly disadvantaged--they not only had high tax rates but also had low education expenditures and a lower quality education program. On the other hand, high-property wealth districts were doubly advantaged--they had both low tax rates and high education expenditures and, in most cases, higher quality education programs. But most efforts to offset these disparities with state aid were only modestly successful over time. It became apparent that additional strategies were necessary to reduce spending differences.

As research by Evans, Murray, and Schwab (1997) shows, many states have undergone court-ordered school finance reform in the past 30 years, which has had limited success in reducing fiscal inequality. Indeed, whether or not the reform was court-ordered, policymakers in most states developed strategies that attempted to reduce spending differences across districts, including flat grants, minimum foundation programs, guaranteed tax base and percentage equalizing formulas, and full state funding. But for the most part, these formulas have fallen far short of reducing fiscal disparities. Although these reforms managed to reverse the trends in tax rates between high- and low-property wealth districts in many states (so low wealth districts tend to have low tax rates and high wealth districts tend to have high tax rates), they still left spending per pupil highly associated with property wealth.

With the national emphasis on teaching students to higher standards, however, it is becoming clear that this question of fiscal fairness, while important, does not address the more fundamental question of what resources are necessary to reach those high standards. Therefore, the traditional focus on equitable distribution of resources is giving way or expanding to a new focus: ensuring that school finance policy can facilitate the goal of teaching students to higher standards. As Clune (1994a, 1994b) argues, this requires a shift in school finance thinking from equity to adequacy. Such a shift challenges policymakers to identify a new school finance structure that is more directly linked to strategies that raise levels of student achievement. 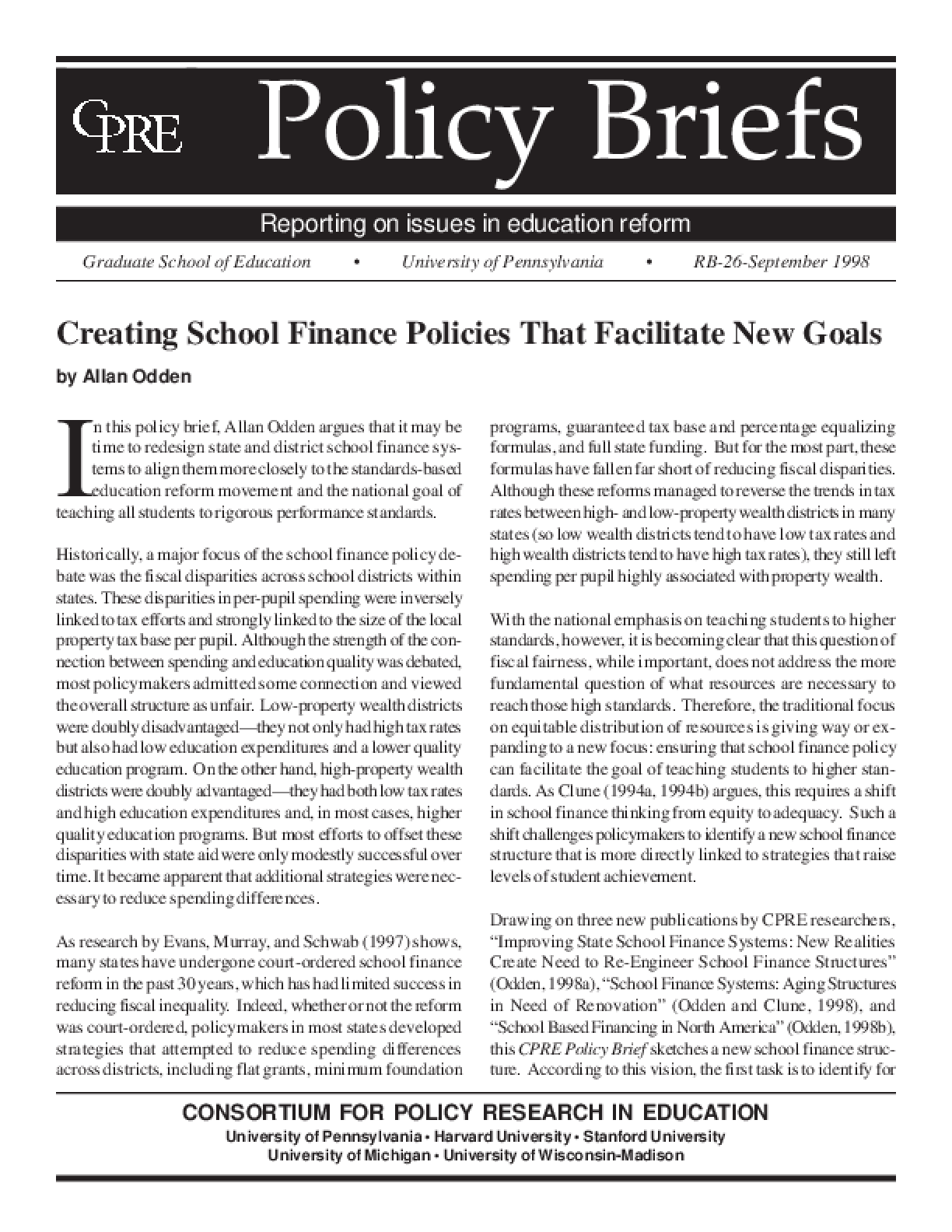