Critique of Maryland's Population Forecast: No Call for a New Youth Detention Facility

NCCD, one of the nation's oldest and most respected criminal justice research organizations, has reviewed the bed space needs forecast reported in Maryland's Department of Public Safety and Correctional Services (DPS) Project Program for New Youth Detention Center (Revised December, 2007) and found serious methodological fl aws that put into question the accuracy of its projections. A forecast based on a sound method would almost certainly produce substantially different estimates of future bed space needs for youth transferred to the adult system in Baltimore. DPS projected that a new youth detention center would require at least 180 cells for youth who are awaiting trial in the adult criminal justice system. The new facility design creates a capacity of 230 youth. After a brief summary of findings, this NCCD report describes shortcomings of the DPS forecast in the light of best practices in the field. Summary of Findings Non-current data. The forecast was made in 2007 and therefore does not account for changes in the past three years. The DPS forecast assumes rises in key factors which actually have been dropping in recent years, such as Baltimore's youth population and youth arrests. Inappropriate aggregate analysis. The DPS forecast attempts to estimate bed space needs in two facilities -- one for youth, one for women -- using a single forecast. Youth and women differ in many ways relevant to the system and therefore should be analyzed separately. Incorrect population data. The DPS projection uses aggregate population data, including youth of all ages and adults. Instead, the forecast should be based only on the segment of the Baltimore population eligible for the proposed youth facility. Incorrect arrest data. The DPS forecast uses a single level of analysis based on arrests for all ages, including adults. The forecast should be based on system data only for the types of offenders the facility will serve. Apparent lack of an independent researcher. The DPS report does not indicate who conducted the forecast; no outside consultant is mentioned. Research and analysis by independent researchers provides the best assurance possible that no unintentional bias impacts the process. No consideration of alternatives. The DPS forecast does not consider changes in policy and practice that would most likely reduce commitments and length of stay such as: risk assessment and standardized decision making in detention decisions; court processing reforms; diversion for substance abusers and mentally ill youth; and increased use of alternatives such as community supervision, house arrest, and electronic/GPS monitoring. NCCD concludes that the DPS forecast cannot be relied upon to accurately estimate future facility needs in Baltimore. Perhaps the strongest indication that the 2007 DPS forecast is unreliable is that recent population trends in the current facility -- that is, the number of youth being held at the Baltimore City Detention Center -- show a strong decline. While DPS projected a need for 178 beds by 2010, as of May of this year there were just 92 youth held in the current facility, just over 50% of the DPS forecast.1 We strongly recommend that DPS conduct a new forecast using current, youth-specific data, and more reliable methodology. 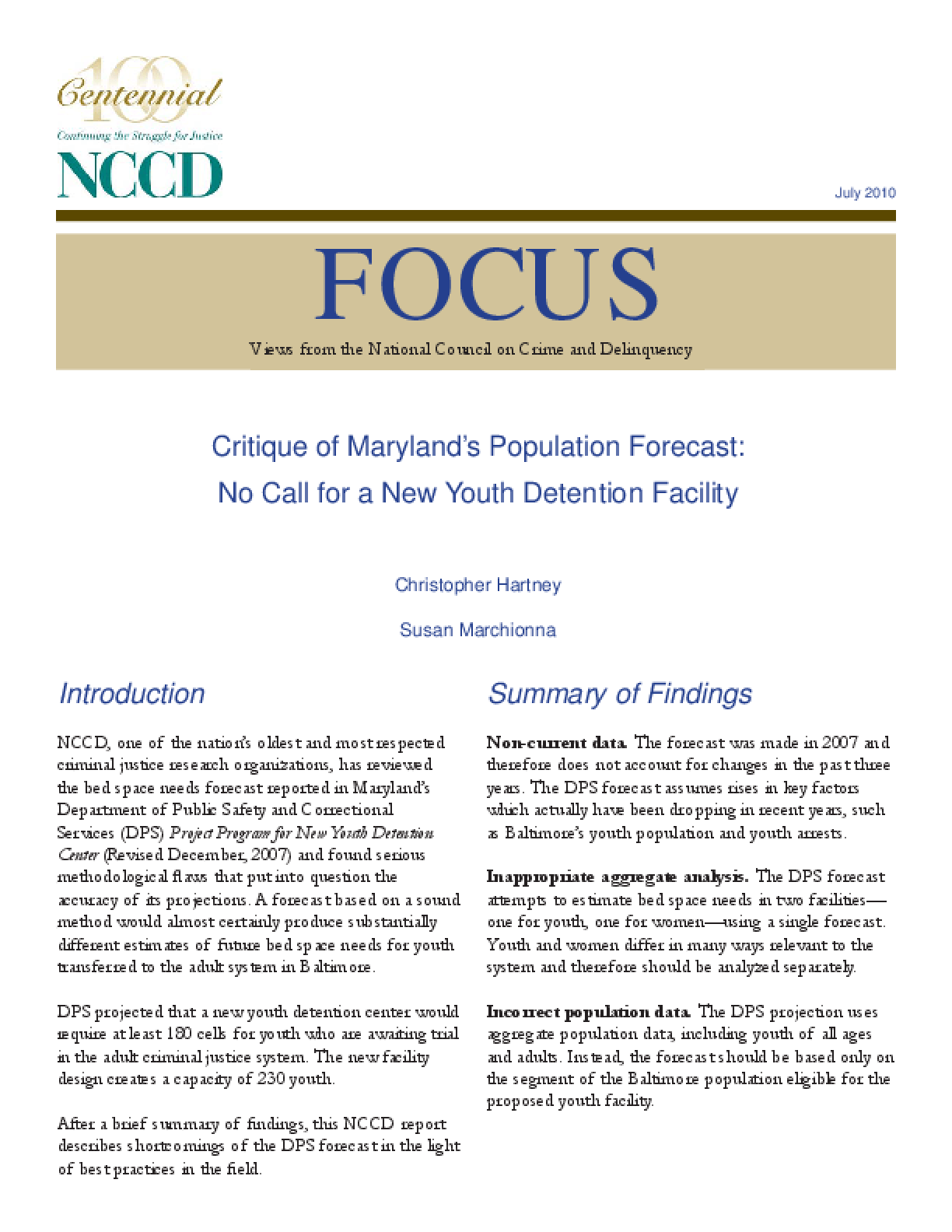