Denying Credit: The Failure to Transition Troops to Civilian Employment

Since September 11, 2001, more than 2.5 million veterans have served in Iraq, Afghanistan, or both ("Gulf War II veterans"). It is widely recognized that securing meaningful employment is one of the most important factors determining the success of each veteran's return to civilian life, influencing not only household income but also the physical and psychological health of these veterans and their families. Promoting veteran employment should thus be a top national priority, a measure o the country's support and respect for military service. And promoting veteran employment should be easy, because many veterans separate from service with significant military training and experience relevant to jobs in the civilian labor market. Yet, despite their marketable skills, Gulf War II veterans are unemployed at rates higher than those of the labor force overall. One substantial obstacle to the employment of veterans is the failure of federal, state, and local licensing authorities to credit military training and experience in granting occupational and professional licenses. This failure can compel veterans to spend months or years in classes and apprenticeship programs waiting for licenses and certifications for which their military training and experience should already have qualified them. In addition to military-civilian collaboration failures within the current licensing regime, certain Gulf War II veterans also suffer employment difficulty beyond licensing, because the occupations related to the licenses for which they may qualify either pay low wages or face anemic growth over the next decade. These veterans could benefit from targeted efforts at further training or education. The U.S. Department of Veterans Affairs (VA) knows where most Gulf War II veterans reside, and the U.S. Department of Labor (DoL) knows the labor market conditions in those areas with high concentrations of veterans. But, at a national level, information regarding the military training and experience (referred to as Military Occupational Specialty, or "MOS") of Gulf War II veterans is held only by the U.S. Department of Defense (DoD), which has refused to make it public. And although the DoD has created its own Military Credentialing and Licensing Task Force, it has thus far focused on only a limited number of MOSes instead of providing complete data to aid lawmakers responsible for reintegrating the millions of service members who were once under the charge of the DoD. This lack of data frustrates policymakers' efforts to determine which licensing regimes might be reformed so as to maximize opportunities for veterans to secure licenses, and to tailor training and education programs for those veterans whose military skill sets are applicable only to low-wage or low-growth jobs. To overcome the DoD's failure to disclose national MOS data, this report looked to an alternative source -- a random sample of the MOS data voluntarily provided to the Connecticut Department of Veterans Affairs by Gulf War II veterans. Using this sample, the Connecticut Veterans Legal Center (CVLC) has produced the first study of its kind: one in which MOS data can be compared to local labor market conditions and state licensing requirements. This report thus identifies those licenses that align with the military training and experience of the largest number of Gulf War II veterans in Connecticut, and then compares those to DoL estimates of current and future labor market conditions. The result is a mapping of licensing regimes policymakers should reform to credit military service and best promote veteran employment. Further, to the extent the Connecticut population of Gulf War II veterans is representative of the nation as a whole, and that local labor market conditions and licensing requirements are comparable to those elsewhere in the country, the conclusions of this report will have national implications. Conversely, if Connecticut's Gulf War II veterans are not representative, or labor market conditions and licensing requirements vary, this study evidences the need to undertake comparable investigations in other states, and for the DoD to cease withholding MOS data that could aid policymakers in better promoting veteran employment nationally. 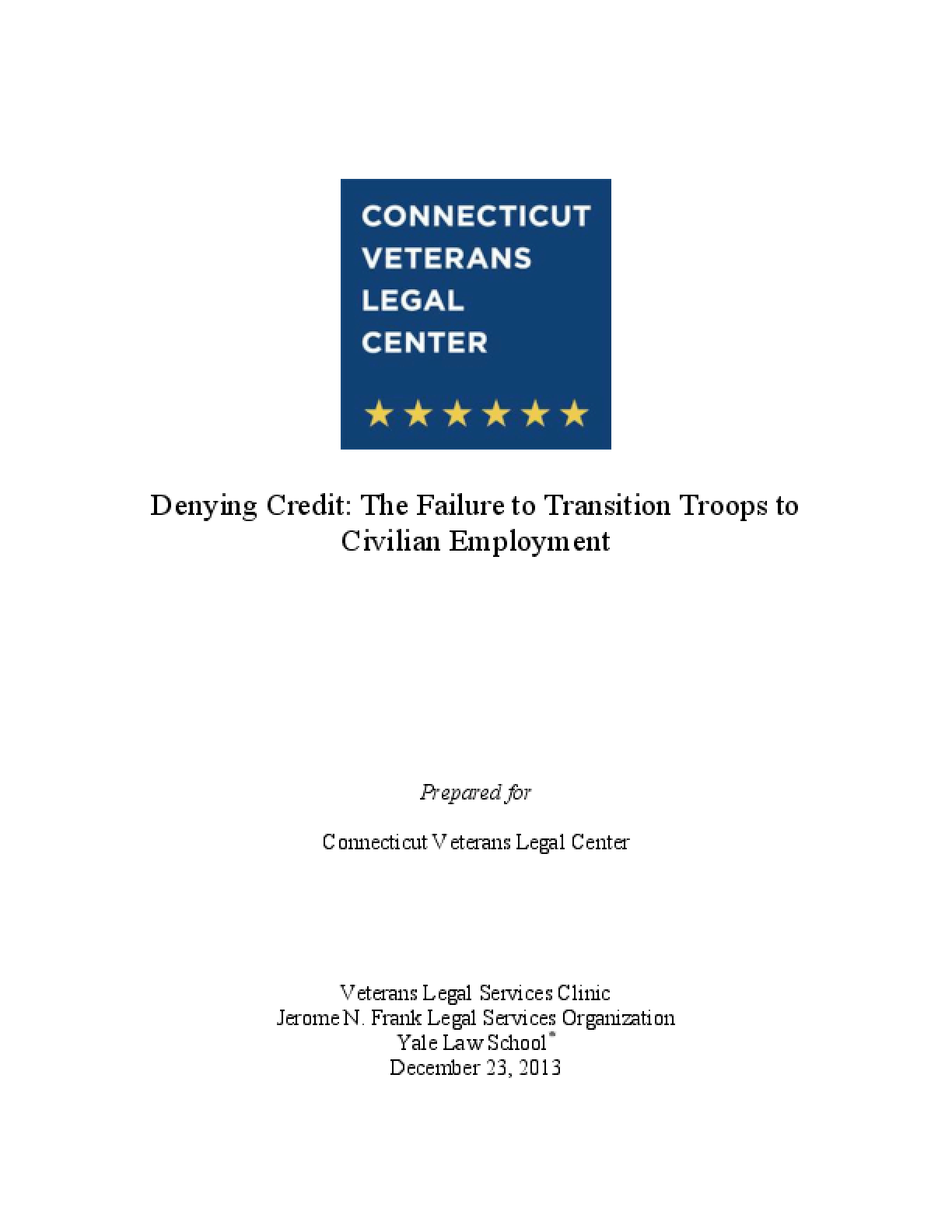