In 2002, the Bill & Melinda Gates Foundation launched the ECHSI with the primary goal of increasing the opportunity for underserved students to earn a postsecondary credential. To achieve this goal, Early Colleges provide underserved students with exposure to, and support in, college while they are in high school. Early Colleges partner with colleges and universities to offer all students an opportunity to earn an associate's degree or up to two years of college credits toward a bachelor's degree during high school at no or low cost to the students. The underlying assumption is that engaging underrepresented students in a rigorous high school curriculum tied to the incentive of earning college credit will motivate them and increase their access to additional postsecondary education and credentials after high school. Since 2002, more than 240 Early Colleges have opened nationwide This study focused on the impact of Early Colleges. It addressed two questions: 1. Do Early College students have better outcomes than they would have had at other high schools? 2. Does the impact of Early Colleges vary by student background characteristics (e.g., gender and family income)? To answer these questions, we conducted a lottery-based randomized experiment, taking advantage of the fact that some Early Colleges used lotteries in their admissions processes. By comparing the outcomes for students who participated in admissions lotteries and were offered enrollment with the outcomes for students who participated in the lotteries but were not offered enrollment, we can draw causal conclusions about the impact of Early Colleges. The primary student outcomes for this study were high school graduation, college enrollment, and college degree attainment. We also examined students' high school and college experiences. Data on student background characteristics and high school outcomes came from administrative records from schools, districts, and states; data on collegeoutcomes came from the National Student Clearinghouse (NSC); and data on high school and college experiences and intermediate outcomes such as college credit accrual camefrom a student survey We assessed the impact of Early Colleges on these outcomes for a sample of 10 Early Colleges that did the following: -Enrolled students in grades 9 -- 12 and had high school graduates in the study years (2005 -- 2011) -Used lotteries as part of the admission processes in at least one of the study cohorts (students who entered ninth grade in 2005 -- 06, 2006 -- 07, or 2007 -- 08) -Retained the lottery records Eight of the 10 Early Colleges in the study were included in the student survey. The overall study sample included 2,458 students and the survey sample included 1,294 students. The study extended through three years past high school. 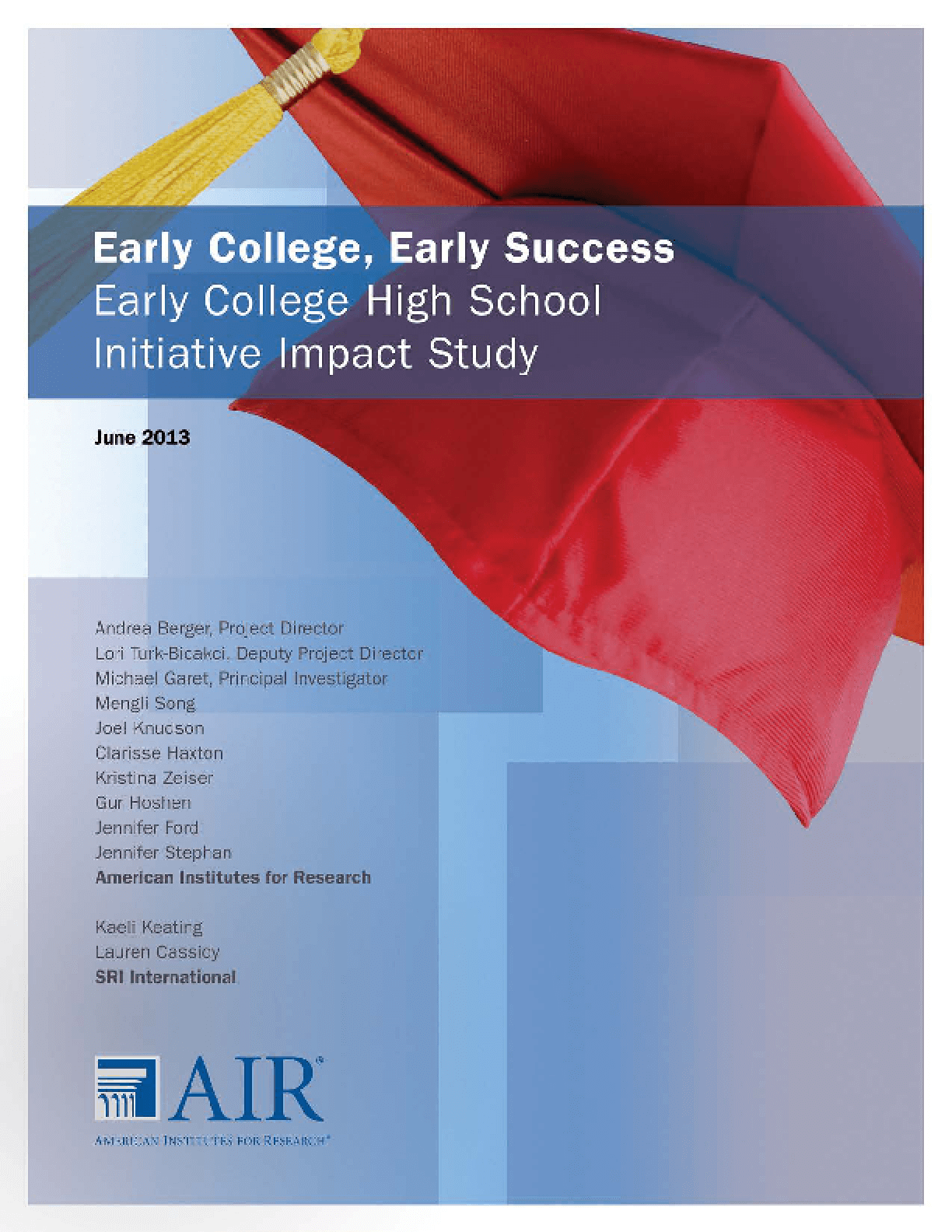