There is an acute need for methods of detecting and investigating fraud in elections, because the consequences of electoral fraud are grave for democratic stability and quality. When the electoral process is compromised by fraud, intimidation, or even violence, elections can become corrosive and destabilizing—sapping support for democratic institutions; inflaming suspicion; and stimulating demand for extra-constitutional means of pursuing political agendas, including violence. Accurate information about irregularities can help separate false accusations from evidence of electoral malfeasance. Accurate information about the scope of irregularities can also provide a better gauge of election quality. Finally, accurate information about the geographic location of malfeasance—the locations where irregularities occurred and how they cluster—can allow election monitors and pro-democracy organizations to focus attention and resources more efficiently and to substantiate their assessments of electoral quality.

Election forensics is an emerging field in which scholars use a diverse set of statistical tools—including techniques similar to those developed to detect financial fraud—to analyze numerical electoral data and detect where patterns deviate from those that should occur naturally, following demonstrated mathematical principles. Numbers that humans have manipulated present patterns that are unlikely to occur if produced by a natural process—such as free and fair elections or normal commercial transactions. These deviations suggest either that the numbers were intentionally altered or that other factors—such as a range of normal strategic voting practices—influenced the electoral results. The greater the number of statistical tests that identify patterns that deviate from what is expected to naturally occur, the more likely that the deviation results from fraud rather than legal strategic voting.

Through a Research and Innovation Grant funded by USAID's Center of Excellence on Democracy, Human Rights, and Governance under the Democracy Fellows and Grants Program, a research team from the University of Michigan, led by Professors Walter Mebane and Allen Hicken, built an innovative online tool, the Election Forensics Toolkit, that allows researchers and practitioners to conduct complex statistical analysis on detailed, localized data produced through the electoral process. The Election Forensics Toolkit presents results in a variety of ways—including detailed country maps showing "hot spots" of potential fraud—that allow practitioners not only to see where electoral fraud may have occurred but also the probability that the disturbances in the election data that the statistical analyses detect are attributable to fraud, rather than to other cultural or political influences, such as gerrymandering or geographic distribution of voting constituencies, among others.

The team also produced two publications under the DFG grant: a Guide to Election Forensics and a more detailed Elections Forensics Toolkit DRG Center Working Paper. The Guide provides a more general introduction to election forensics as a field, and the DRG Center Working Paper focuses on presenting in detail the results of applying election forensics to specific elections in Afghanistan, Albania, Bangladesh, Cambodia, Kenya, Libya, South Africa, and Uganda 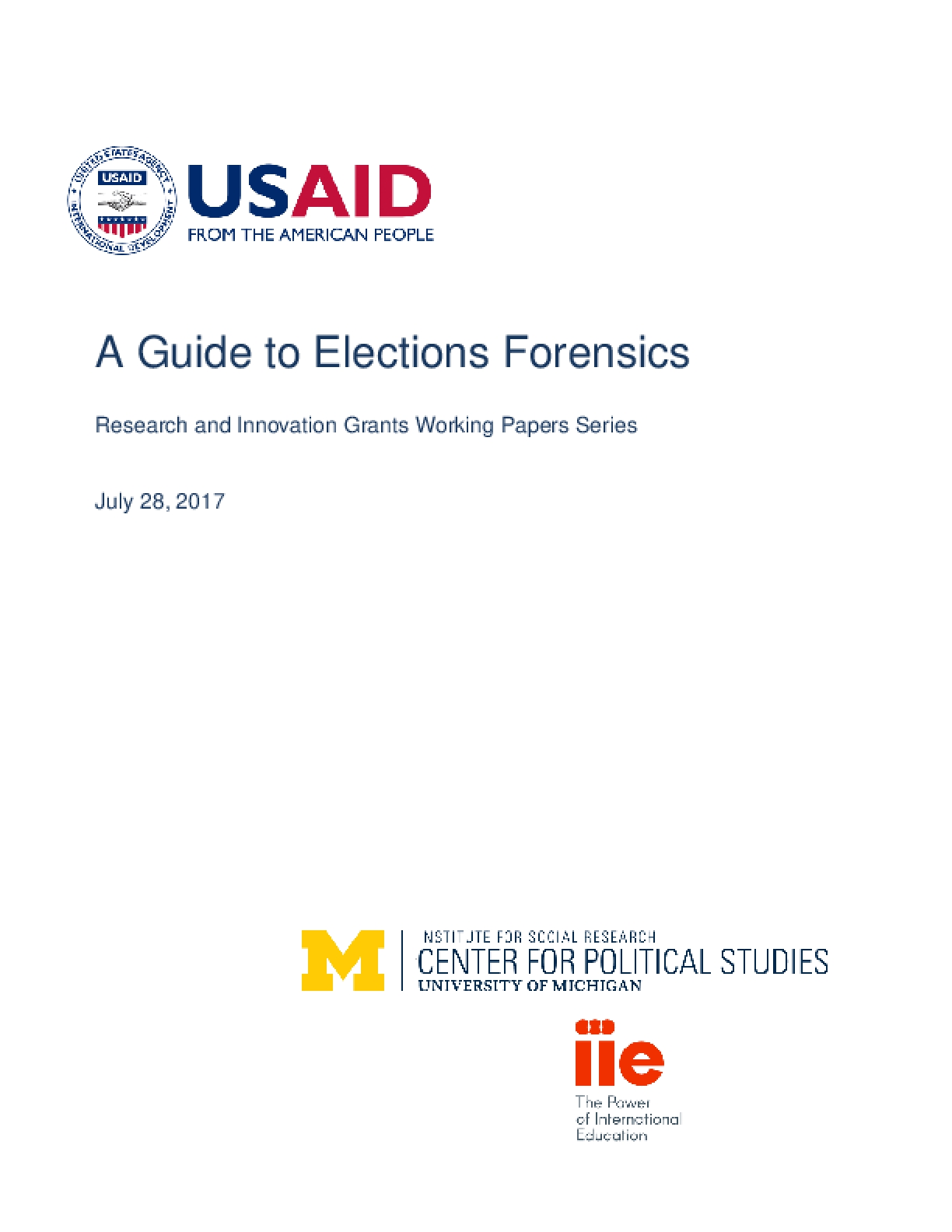