Encouraging Evidence on a Sector-Focused Advancement Strategy: Two-Year Impacts from the WorkAdvance Demonstration

This report summarizes the two-year findings of a rigorous random assignment evaluation of the WorkAdvance model, a sectoral training and advancement initiative. Launched in 2011, WorkAd-vance goes beyond the previous generation of employment programs by introducing demand-driven skills training and a focus on jobs that have career pathways. The model is heavily influenced by the positive findings from the Sectoral Employment Impact Study (SEIS) completed in 2010. A major component of the WorkAdvance model, in common with the programs studied in the SEIS, is formal training offering industry-recognized certifications, reflecting the hypothesis that skills acquisition is necessary for advancement. The model also requires providers to be far more employer-facing than traditional training programs, taking into account multiple employers' changing skill requirements, employee assessment practices, and personnel needs. This report presents the imple-mentation, cost, participation, and two-year economic impacts of WorkAdvance. The economic results are based on unemployment insurance earnings records and a second-year follow-up survey.
The WorkAdvance program operations and evaluation are funded through the federal Social Innovation Fund (SIF), a public-private partnership administered by the Corporation for National and Community Service. This SIF project is led by the Mayor's Fund to Advance New York City and the NYC Center for Economic Opportunity in collaboration with MDRC.
Key Findings*All providers translated the WorkAdvance model into a set of concrete services, but it took time— more than a year for some components and providers -- and a substantial amount of tech-nical assistance and support. As a result, at some sites, later study enrollees were more likely than earlier ones to experience a fully implemented and "mature" WorkAdvance program.
*Overall, WorkAdvance resulted in very large increases in participation in every category of services, as well as in training completion and credential acquisition, compared with what would have happened in the absence of the program. Expenditures for the operation of WorkAdvance fell between $5,200 and $6,700 per participant at the four providers delivering the program.
*WorkAdvance providers increased earnings, with variation in results that closely matched the providers' experience in running sector-based programs and the extent to which the services they offered were demand driven. The most experienced sectoral provider, Per Scholas, had large and consistent impacts on both primary and secondary outcomes. Madison Strategies Group and Towards Employment, providers new to sectoral training, had promising but less consistent results that grew stronger for later enrollees. One provider, St. Nicks Alliance, did not produce positive impacts. The results did not differ dramatically across subgroups, though en-couragingly, WorkAdvance was able to increase earnings among the long-term unemployed.
The evaluation as a whole provides important information for workforce development providers interested in pursuing a sector strategy. The analysis considers the role played by providers' sector-specific training and preparation and the role played by the nature of the sectors themselves. Future priorities that emerge from the results are (1) understanding how to help the more disadvantaged access the programs and (2) learning how to build service capacity, given how complex the model is to run. 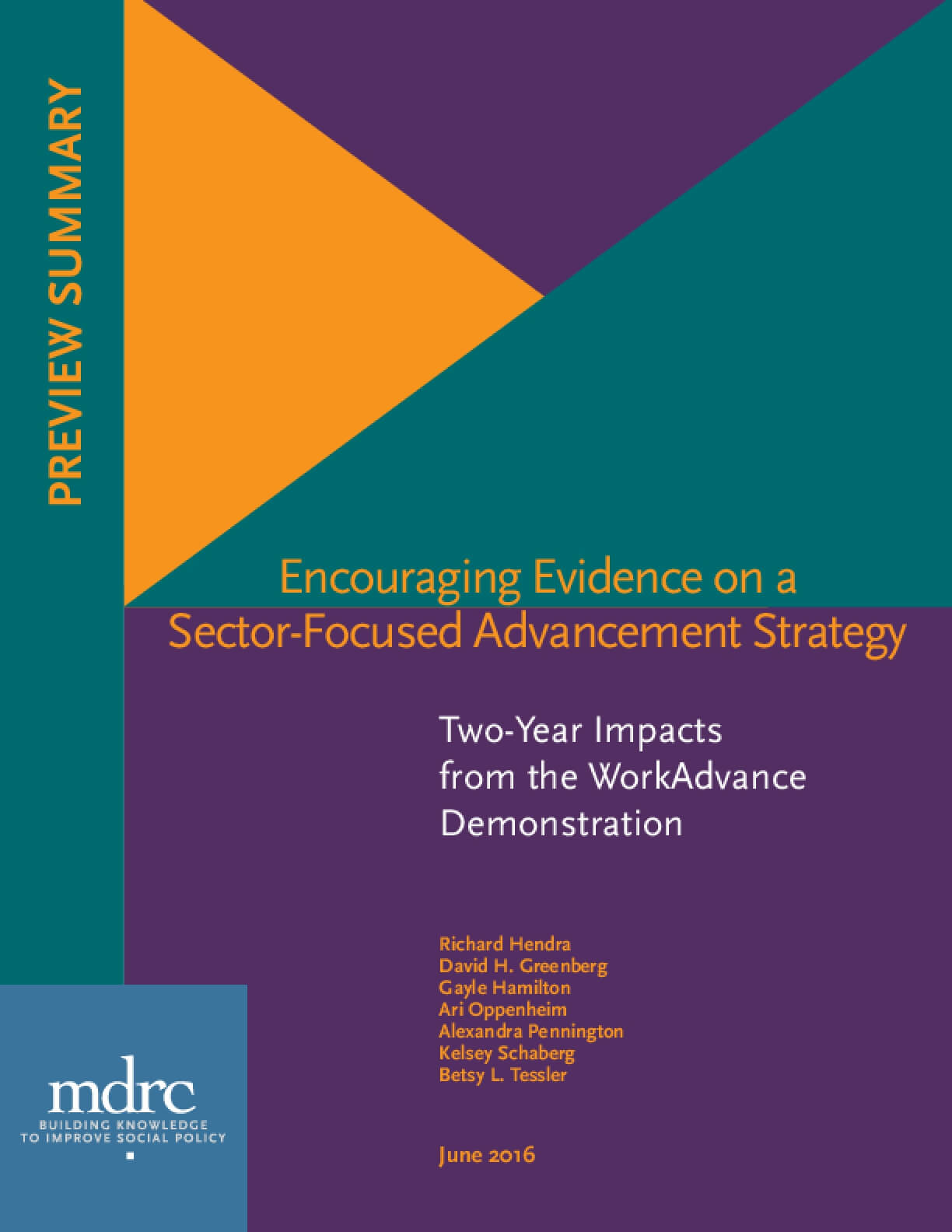