Now that the year's grain harvest is safely in the bin, it is time to take stock and look ahead. This year's harvest of 1,967 million tons is falling short of the estimated consumption of 2,040 million tons by some 73 million tons. This shortfall of nearly 4 percent is one of the largest on record. Even more sobering, in six of the last seven years world grain production has fallen short of use. As a result, world carryover stocks of grain have been drawn down to 57 days of consumption, the lowest level in 34 years. The last time they were this low wheat and rice prices doubled. The growth in world grain consumption during the six years since 2000 averaged roughly 31 million tons per year. Of this growth, close to 24 million tons were consumed as food or feed. The annual growth in grain used to produce fuel ethanol for cars in the United States alone averaged nearly 7 million tons per year, climbing from 2 million tons in 2001 to 14 million tons in 2006. Now the amount of grain used to produce fuel is exploding. Investment in crop-based fuel production, once dependent on government subsidies, is now driven by the price of oil. With the current price of ethanol double its cost of production, the conversion of agricultural commodities into fuel for cars has become hugely profitable. In the United States, this means that investment in fuel ethanol distilleries is controlled by the market, not by government. 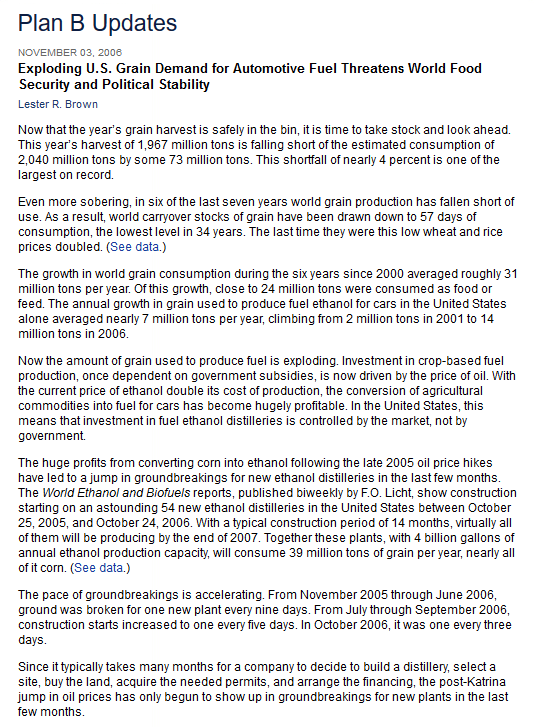