After saturating neighborhoods of predominantly black and Latino residents with high-cost, often predatory lending throughout the subprime boom, banks have failed at preventing foreclosures while returning to high and disparate rates of loan denial for applicants of color, according to a new report by the California Reinvestment Coalition. Based on original research using lending and loan modification data that have been largely inaccessible and seldom analyzed, the report looks at how banks, including the largest financial institutions, have acted in five California cities (Los Angeles, Oakland, Sacramento, San Diego, and Stockton) over the last three years. What the data indicate is an alarming trend of dispossession in neighborhoods with high concentrations of African American and Latino residents. Not only have these areas received a devastating amount of predatory home loans -- and subsequent defaults -- but they also receive markedly low numbers of loan modifications and an accompanying bigger drop in the origination of new prime loans than other neighborhoods. Key findings include: Lenders saturated California neighborhoods with high-cost loans: For example, in Oakland, the Big Bank Lenders made 70% of all their high-cost loans in neighborhoods predominantly of color while making just over 40% of their lower-cost prime loans in these same neighborhoods. Unsustainable loans created concentrated foreclosures: In each of the five survey cities, foreclosures disproportionately affected neighborhoods of color. In Los Angeles, zip codes with 80% or more residents of color contained over 63% of the city's housing units but suffered over 90% of its foreclosures. Lenders fail to work with families to prevent foreclosures: Sample loan level data, representing one-sixth of all mortgages in foreclosure and 20% of all loan modifications, show that from December 2008 to November 2009, Sacramento and San Diego saw fewer than 1,000 permanent modifications, Oakland had only 372, and Los Angeles only 2,326. Re-redlining is occurring as lenders deny credit to communities most affected by bad bank practices: Neighborhoods of color saw a dramatic decrease in lower-cost prime loans in 2008: There were stunning drop-offs from 2006 to 2008 in Oakland, which went from 3,901 prime loans to 1,301; and Los Angeles, which went from 17,615 prime loans to 4,623. 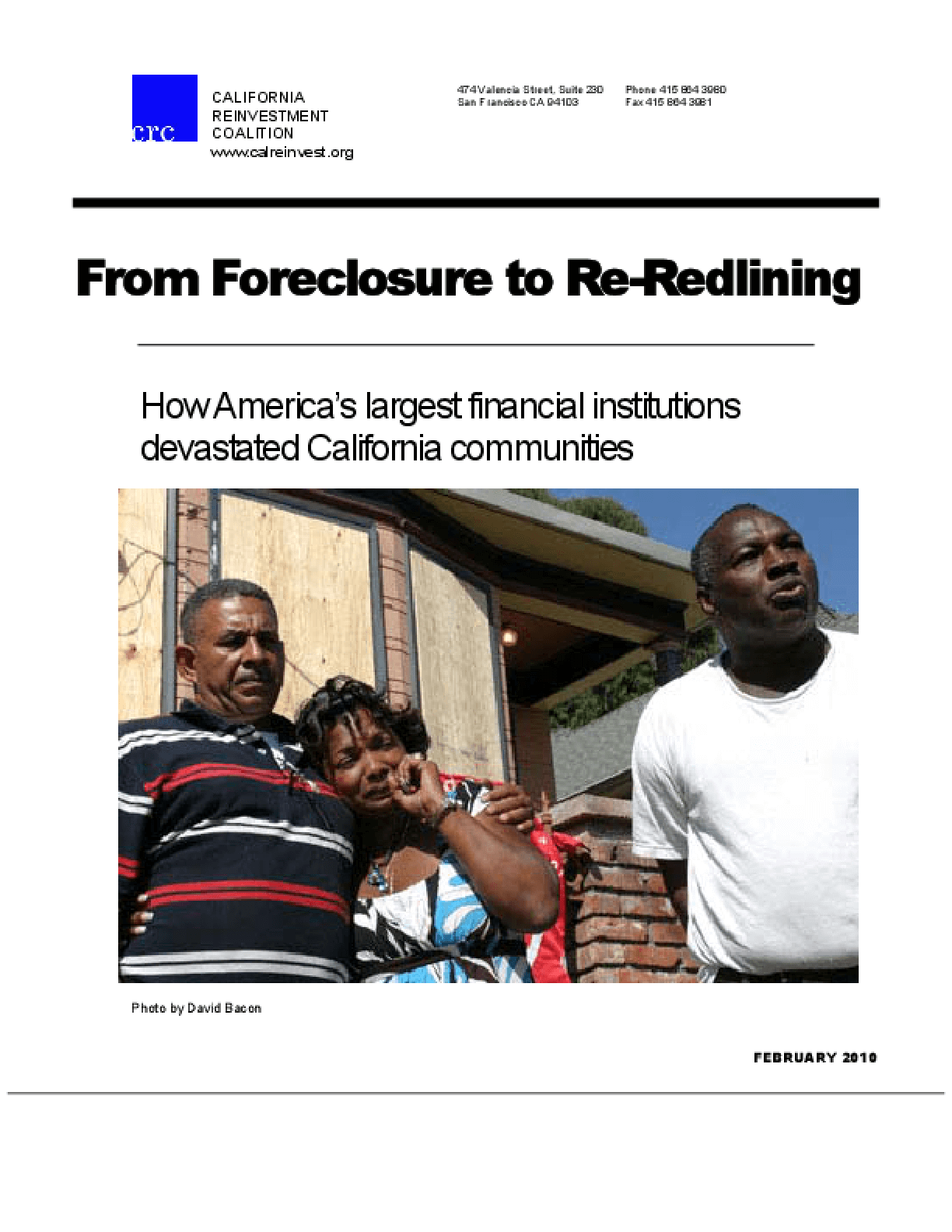