From Identification to Durable Solution: Analysis of the Resettlement of Unaccompanied Refugee Minors to the United States and Recommendations for Best Interest Determinations

Internationally, not much is known about unaccompanied refugee children who are identified for third country resettlement and who they are as a group. As the largest resettlement country, the United States resettles more unaccompanied children than any other nation and much can be learned from this group of children's cases. Sharing this information with the international community could inform policies and programs related to the identification of displaced children in need of durable solutions.

This USCCB/MRS staff report is intended to assist with educating the international audience about the population of unaccompanied refugee minors identified for refugee resettlement to the United States. It builds upon and compares results from a previous USCCB report. Drawing upon our professional experience with best interest assessments and determinations for unaccompanied/separated children, we also include in this report concrete suggestions regarding best interest determinations in refugee settings. Our hope is that sharing this information will be a helpful tool for those in the international community who are charged with or have the capacity to provide a voice of protection for vulnerable refugee children.

For refugee minors unable to resettle with family members or other appropriate caregivers, the United States Refugee Program provides specialized foster care services through the Unaccompanied Refugee Minor (URM) program network. The URM programs are designed to provide culturally and linguistically appropriate foster care and supportive services to refugee children and youth. They originated in the 1980s in response to the needs of unaccompanied refugee children arriving from Southeast Asia; since then, the programs have received almost 13,000 children from countries all over the world. Placement into the URM programs is offered by two national voluntary agencies: Lutheran Immigration and Refugee Services (LIRS) and the United States Conference of Catholic Bishops/Migration and Refugee Services (USCCB/MRS), both of which receive approximately equal numbers of URMs each year.

The majority of unaccompanied refugee minors who enter the URM programs are identified overseas by United Nations High Commissioner for Refugees (UNHCR) staff, nongovernmental organizations and others. Currently most children who are referred for resettlement into a URM program have had their needs evaluated through a process called a Best Interest Determination (BID). The UNHCR Guidelines on Determining the Best Interests of the Child (2008) states that, "Resettlement to a country other than that of the parents can be in the best interest of the child, if family reunification is neither possible in the place of residence of the parents (for instance, due to safety considerations) nor in the country of asylum, and the child faces serious protection risks which cannot be addressed in the environment of the country of asylum." Often a BID is conducted in an effort to identify a durable solution -- including voluntary repatriation, local integration, and resettlement -- for the child.

When a child is referred to USCCB or LIRS for resettlement, a BID is included in the referral documentation. These BIDS are invaluable in understanding the child's history and in making decisions about the best placement option in the U.S. for the child.

In 2010, the U.S. Conference of Catholic Bishops (USCCB) conducted an evaluation of Best Interest Determinations for most of the unaccompanied refugee minors who were resettled by USCCB between October 1, 2007 and March 31, 2009. Among the recommendations in that report was the need for greater efforts to identify children in urban settings, the need to conduct BIDs promptly and to be alert to the possibility of trafficking in refugee settings. This report looks at the BIDs and other pre-arrival case information for all of the URMs resettled by USCCB from January 2010 through March 2011. We found some changes from the last report and some areas where we believe there is room for improvement. 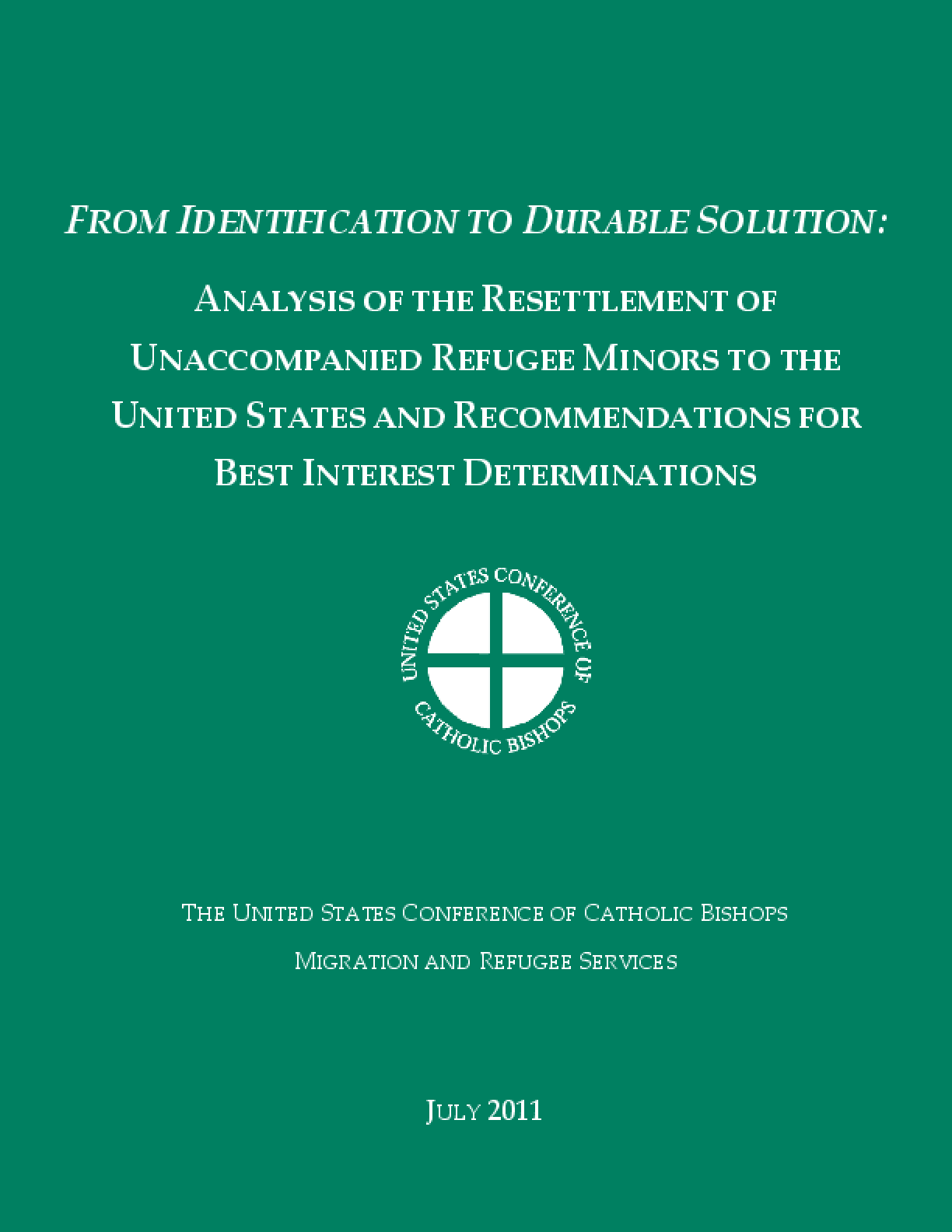