Getting it Right from the Start: Priorities for action in the new Republic of South Sudan

Amidst jubilant celebration, the new Republic of South Sudan entered the international stage in July 2011 albeit as one of the least developed countries in the world. The challenges and opportunities are enormous, and donors, the government, implementing agencies and most importantly the people of South Sudan have a lot at stake - but much more to gain. Against a backdrop of chronic under-development, the country is acutely vulnerable to recurring conflict and climatic shocks. More than 220,000 people were displaced last year due to conflict and more than 100,000 were affected by floods; and already this year, fighting in the disputed border areas, clashes between the Sudan People's Liberation Army (SPLA) and militia groups, disputes over land and cattle, and attacks by the Lord's Resistance Army, have forced nearly 300,000 people from their homes. South Sudan is a complex context that challenges normal humanitarian and development paradigms. Such complexity has not always been reflected in the strategies of either donors or implementing agencies. This paper presents ten areas that the Government of South Sudan (GoSS) and donors must prioritise in the first years of the country's independence so as to ensure the best possible results for the people of South Sudan. The joint NGO paper was written as part of Oxfam's Conflicts and Emergencies campaign aimed at highlighting the right to appropriate assistance and adequate protection for people caught in conflicts and crises. In light of independence the Government of South Sudan and many donors are seeking to establish aid and investment priorities and strategies. These new plans must: continue support for humanitarian needs; seek to prevent conflict; support community and civil society participation; ensure equitable development across the country; prioritise vulnerable populations; promote sustainable livelihoods; strengthen government capacity; enable an appropriate transition to government authorities; provide timely and predictable funding; and engage in multi-sectoral integrated programming . This is a critical time to get aid policies and programs right in order to ensure peace, security, and prosperity for the people of South Sudan. The accompanying note summarises views presented by the SSRRC and MFAIC at a meeting between representatives of the SSRRC and 6 NGO representatives (on behalf of the 38 signatory agencies to the report) held in Juba on 31 August 2011 to discuss the joint-ngo paper Getting it Right from the Start: Priorities for Action in the New Republic of South Sudan. NGOs welcome the Statement from government representatives and invite further discussion on the recommendations in the report and the views shared in the government response. 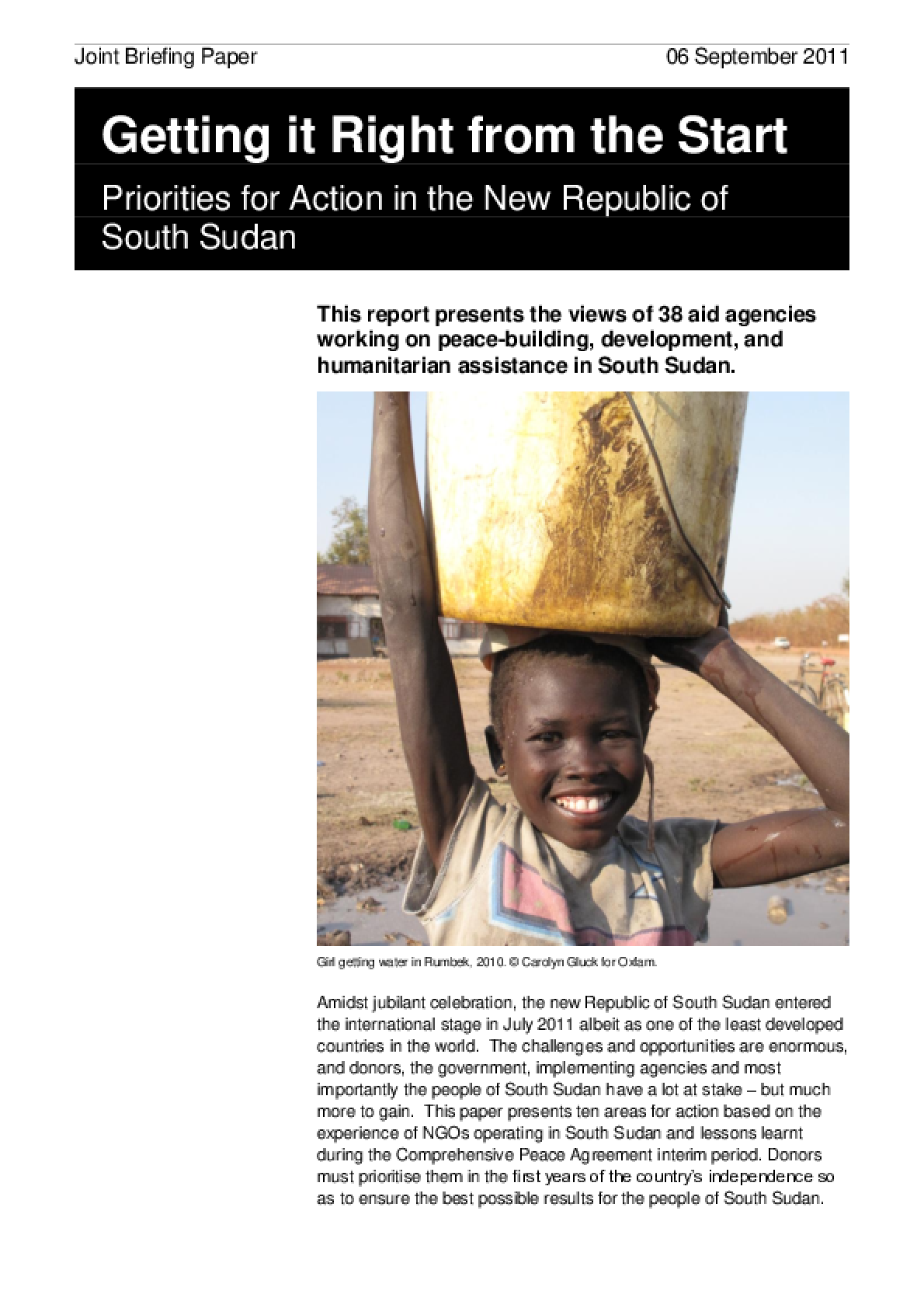