High-deductible health plans (HDHPs) are an important and growing part of the health insurance landscape. By some estimates, as many as 80 percent of large employers may offer an HDHP in 2014. In 2013, more than 15 million Americans received health coverage through an HDHP, a more than a threefold increase since 2007. As outlined by the U.S. Treasury Department, individuals with an HSA-eligible HDHP are required to pay the full cost of most medications and services -- in theory utilizing pre-tax HSA funds -- until deductibles are met. However, the 2003 authorizing legislation and further guidance include a safe harbor allowing plans to cover primary preventive services, those typically deemed to prevent the onset of disease, before the deductible is satisfied. Services or benefits meant to treat "an existing illness, injury or condition," are excluded from first-dollar coverage in HSA-eligible HDHPs, which encompasses most secondary preventive services. For example, plans are prohibited from providing first dollar coverage of disease management services such as insulin, eye and foot exams, and glucose monitoring supplies for patients with diabetes. As chronic disease conditions currently make up 75 percent of total U.S. health spending, appropriate chronic disease management is an important tool to lower long-term health care costs. As the market for HDHPs grow, it is important that they maintain the flexibility to allow for effective health management of all beneficiaries. This report addresses the strict definition of prevention that an HDHP must follow for it to include a pre-tax health savings account (HSA), and how this restriction limits the effectiveness of current plans. A potential solution - allowing HSA-eligible HDHPs to provide first-dollar coverage for targeted, evidence-based, secondary preventive services that prevent chronic disease progression and related complications - can improve patient-centered outcomes, add efficiency to medical spending, and enhance HDHP attractiveness. A multi-disciplinary research team from the University of Michigan's Center for Value-Based Insurance Design, Harvard Medical School, and the University of Minnesota conducted a multi-part project to investigate the impact of updating the definition of prevention for HDHPs to include selected secondary preventive services that are frequently used as health plan quality metrics and included as elements of pay-for-performance programs. Specifically, the project aimed to: 1) determine the premium effect, actuarial value, and estimated market uptake of the novel HDHP plan that covers these evidence-based services outside the deductible, and 2) explore through interviews whether insurance industry experts found coverage of secondary preventive services a worthwhile endeavor. 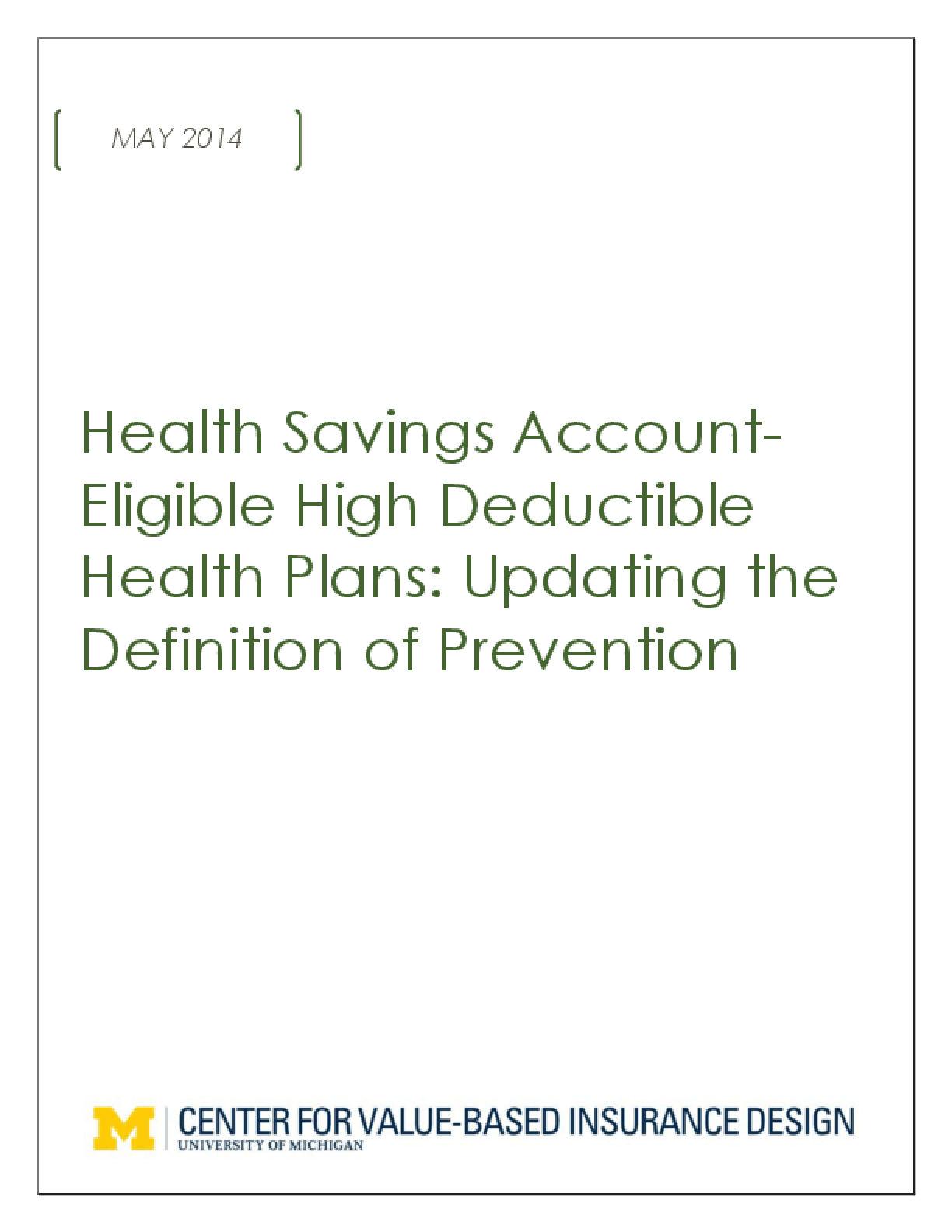