In 2002 Congress enacted the Help America Vote Act (HAVA) authorizing $3.9 billion to modernize and improve federal elections. Debate over how to fulfill the requirements of the new law has focused on new technology, both new voting machines and computerized statewide registration systems.Yet, as election officials well understand, new, sophisticated technology alone will not solve the ills that surfaced in the 2000 presidential election. Sound administrative practices are equally necessary to ensure that elections are run both fairly and accurately. And much less has been said on this subject.

According to the law's congressional authors, HAVA is intended to ensure that eligible voters are able to cast a vote and have that vote counted accurately. The law established minimum federal requirements to protect both eligible voters and valid votes, thus providing stronger security for the election process.

In this report, the League of Women Voters focuses not on the technology, about which much has already been said and written, but on the administrative framework that will deploy new technologies and management systems to meet the goals of greater accuracy and security. The report sets forth a set of recommended operational and management practices for election officials that protect eligible voters, ensure valid votes will be counted and bolster voters' confidence.

In "Election Reform and Electronic Voting Systems (DREs): Analysis of Security Issues," (2003) a report issued by the Congressional Research Service, three widely accepted elements of defense against security risks are cited: technology, personnel and operations. This League report adopts that framework, but focuses primarily on the latter two elements, personnel and operations.

Technological security defenses will be addressed by guidelines developed by the federal Election Assistance Commission (EAC) in cooperation with the National Institute of Standards and Technology (NIST).

In 2002, elections officials in Florida discovered the cost of focusing on technology without equal emphasis on personnel and operations. One county purchased all new electronic voting systems only to discover in the 2002 gubernatorial primary that its process for administering the new machines was flawed -- ballots were incorrectly loaded -- and its poll workers had not been adequately trained on how to operate the new machines. As a consequence, many polls opened late and some never opened at all.

The same principle holds true with regard to voter registration. Example: In 2000, Florida paid a firm to conduct a computerized match of the voter rolls against felon lists. The resulting list of felons that the state then transmitted to counties for purging had an accuracy rate of only 80 percent. Counties that purged the voters without verifying the information found that they had erroneously removed eligible voters from the rolls. In both cases, technological solutions provided voters no protection against flawed management of that technology.

As states purchase new voting machines and create statewide registration systems, they will need to pay equal attention to administrative and management practices.

This report culls from interviews with election officials and other experts a set of practices that can provide a more secure foundation for two key components of election administration: voting systems and voter registration systems. The recommendations offered below are based on practices already in use. In other words, they are not theoretical but practical. 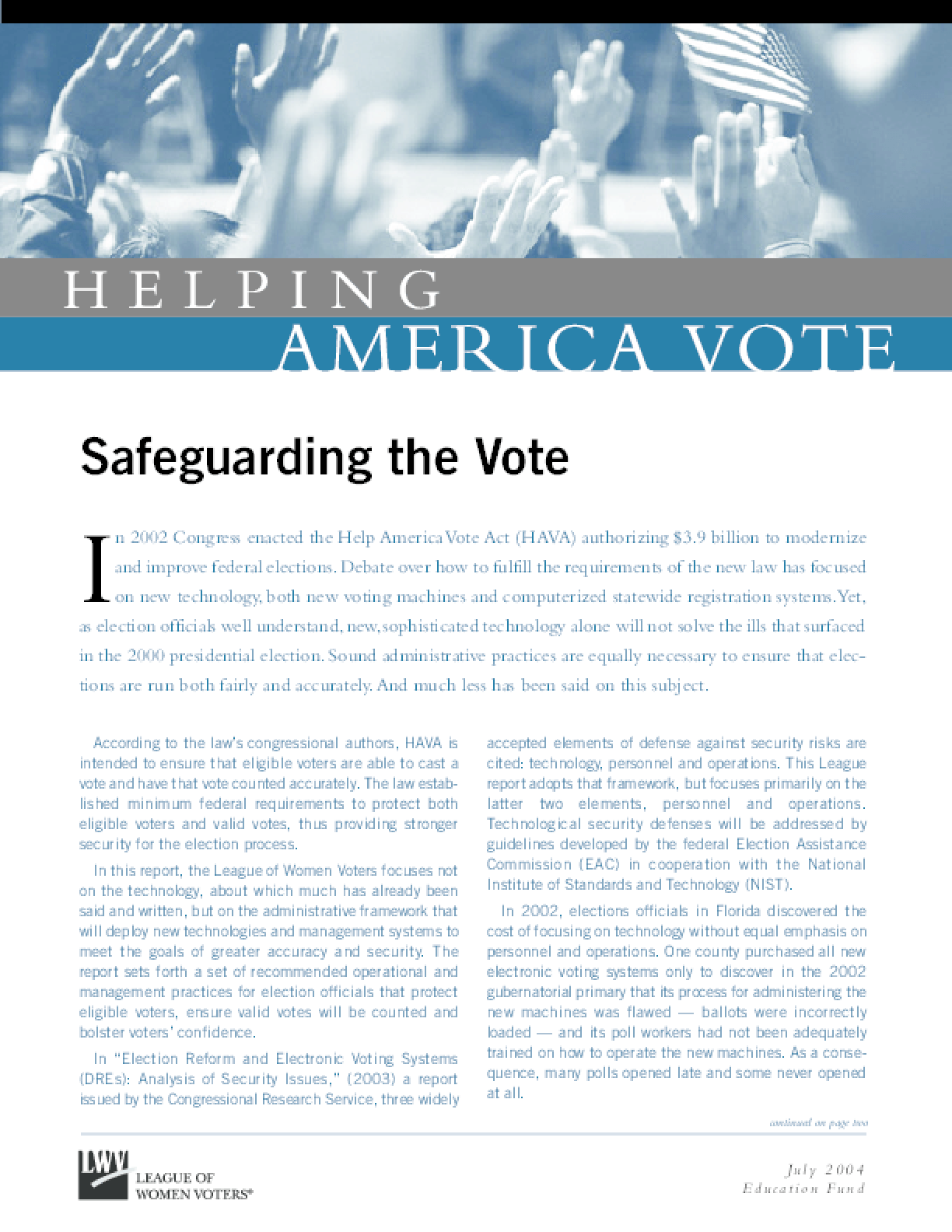