In the face of high energy prices and concerns about global warming, environmentalists and planners offer high-speed rail as an environmentally friendly alternative to driving and air travel. California, Florida, the Midwest, and other parts of the country are actively considering specific high-speed rail plans. Close scrutiny of these plans reveals that they do not live up to the hype. As attractive as 110-to 220-mile-per-hour trains might sound, even the most optimistic forecasts predict they will take few cars off the road. At best, they will replace for profit private commuter airlines with heavily subsidized public rail systems that are likely to require continued subsidies far into the future. Nor are high-speed rail lines particularly environmentally friendly. Planners have predicted that a proposed line in Florida would use more energy and emit more of some pollutants than all of the cars it would take off the road. California planners forecast that high-speed rail would reduce pollutionand greenhouse gas emissions by amere 0.7 to 1.5 percent -- but only if ridership reached the high end of projected levels. Lower ridership would nullify energy savings and pollution reductions. These assessments are confirmed by the actual experience of high-speed rail lines in Japan and Europe. Since Japan introduced high-speed bullet trains, passenger rail has lost more than half its market share to the automobile. Since Italy, France, and other European countries opened their high-speed rail lines, rail's market share in Europe has dwindled from 8.2 to 5.8 percent of travel. If high-speed rail doesn't work in Japan and Europe, how can it work in the United States? As megaprojects -- the California high-speed rail is projected to cost $33 to $37 billion -- high-speed rail plans pose serious risks for taxpayers. Costs of recent rail projects in Denver and Seattle are running 60 to 100 percent above projections. Once construction begins, politicians will feel obligated to throw good taxpayers' money after bad. Once projects are completed , most plans call for them to be turned over to private companies that will keep any operational profits,while taxpayers will remain vulnerable if the trains lose money. In short, high-speed rail proposals are high cost, high-risk megaprojects that promise little or no congestion relief, energy savings, or other environmental benefits. Taxpayers and politicians should be wary of any transportation projects that cannot be paid for out of user fees. 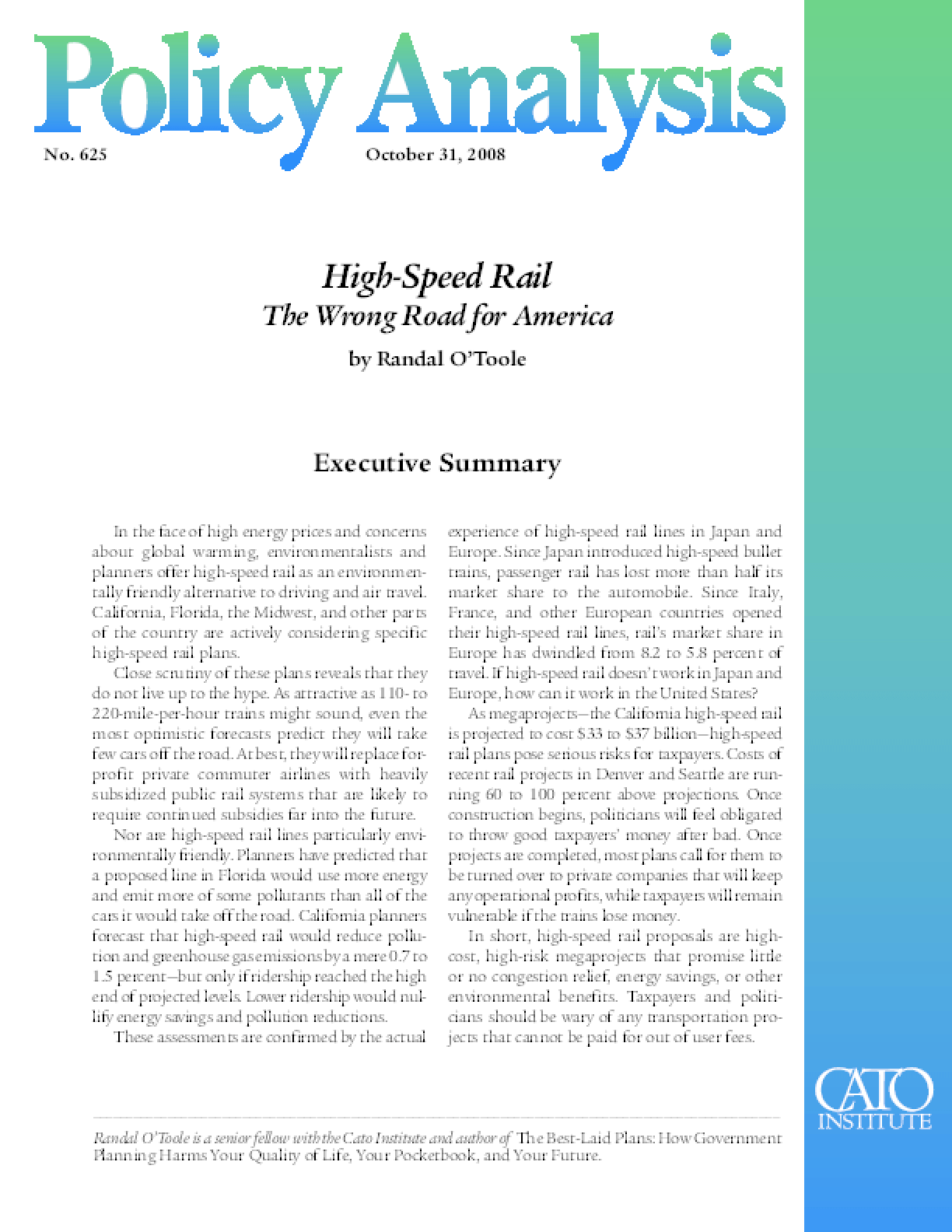