While the primary goal of the HOPE VI program is to improve the living environment of public housing residents, it also aims to help residents move toward self-sufficiency by helping them find new or better jobs (see page 6). The program's Community Support Services (CSS) component can help identify what residents need, such as job training or placement, to make them more likely to find employment. Relocation itself might help residents find employment if they move to less poor neighborhoods with more job opportunities and better job information networks. Residents who move back to new mixed-income developments on the HOPE VI sites could experience similar improved job networks. However, whether these expectations of increased employment and self-sufficiency are realistic for HOPE VI residents is unclear. For both employed and nonemployed residents, the gap between household income and the income needed for housing and other costs of living is wide. The HOPE VI Panel Study is tracking the well-being of residents from five HOPE VI sites (see page 7). These respondents, mostly African American women, were extremely poor at baseline.[1] The vast majority reported household incomes below the poverty level, and over a third (35 percent) reported annual incomes of less than $5,000. Less than half (45 percent) of respondents were employed, and those who were working earned low wages (Popkin et al. 2002). This brief discusses income and employment findings for working-age adults under 62 years old two years after relocation started at the five HOPE VI Panel Study sites.[2] It examines various barriers to employment for respondents, and considers both expectations for future employment and the services and support systems that might best mitigate those barriers. Future research will examine how residents' employment experiences are affected as relocation is completed and some residents return to the revitalized developments. Brief #4 from the series "Metropolitan Housing and Communities: A Roof Over Their Heads". Notes from this section 1. Because many health problems vary significantly by gender and race, and because over 90 percent of the adults in the HOPE VI Panel Study are women and 89 percent are African American, a sample of black women nationally is used as the comparison group. The national data cited in this brief are published by the U.S. Department of Health and Human Services, calculated from the National Health Interview Survey in 2001. National Health Interview Survey data are broken down by sex and race, but not further by poverty status. Nationally, approximately one-third of all black women live in households with incomes below the poverty level. Therefore, the comparison data are biased slightly upward in terms of better health because of the relatively better economic well-being of the national population of black women compared to the HOPE VI sample. Even limiting the comparisons to similar gender, race, and age groups, adults in the HOPE VI study experience health problems more often than other demographically similar groups. 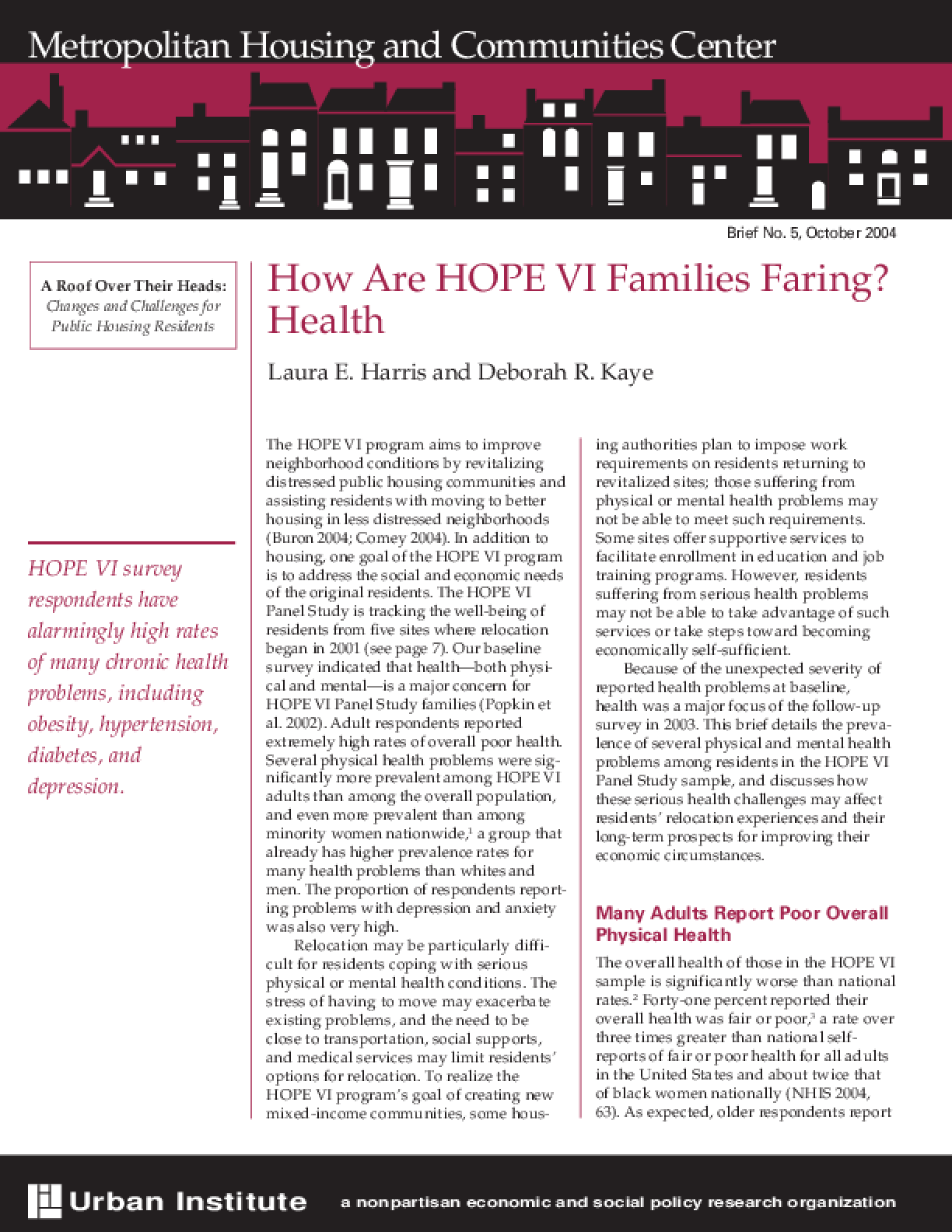