A case study of the Lawrence Welk Family Foundation's youth engagement strategies. The Lawrence Welk Family Foundation was formed in 1960 by musician and entertainer Lawrence Welk. His daughter, Shirley Fredricks, established one of the nation's first next generation boards in 1983. The youth participated at full board meetings and were given 10% of the board budget for their own grantmaking. The Foundation's mission is to award grants to nonprofit organizations serving children and families living in poverty in three Southern California neighborhoods. In addition, a small portion of their funding goes to nonprofits promoting youth and family philanthropy. 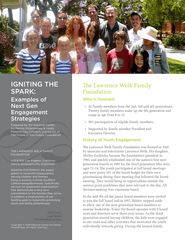