Information about the Proposed Changes in Charitable Deductions - Updated 3.17.09

Nonprofit leaders need to understand the distinctions between the three different federal budget bills   that have filled news headlines the last month. While the federal stimulus package and the 2009   federal budget have been enacted, the third item (the President's proposed budget for 2010) likely will   not be voted on for months. This last one has generated lots of concern and confusion among   nonprofits and some donors because it proposes to reduce the amount that high‐income individuals   can deduct from their taxes (including for charitable contributions) in order to help pay the largest   part of health care reform. To help nonprofit leaders answer questions and lead informed discussions   about the last item, this Special Report supplies some basic information about the three budget   matters, explains aspects of the proposed change to tax deductions as it relates to charitable   contributions, and offers three simple action steps.
The Three Different Federal Budget Matters
One‐time extra funding:   On February 17 President Obama signed into law the emergency $787 billion economic stimulus package, the American Recovery and Reinvestment of 2009, PL 111‐5, to spend extra money and provide extra tax cuts beyond the normal budget.
Current operating year budget:   In February Congress resumed action on the current year (2009) budget that actually began last October 1st.  In 2008, Congress and the Bush Administration could not agree on various aspects, so only parts of the budget officially got passed last year; other parts of the federal government were operating through "Continuing Resolutions" that allow government operations to continue at the same basic level as the previous year's budget. The House and the Senate recently finished their work on the rest of the 2009 federal budget, which the President signed last week.
Proposed budget for future years:   On February 26 President Obama released his PROPOSED budget for 2010, which – if passed – would go into effect from October 1, 2009 through September 30, 2010.  His proposed budget included two interrelated proposals of interest to many nonprofits. The first is the President's proposal to create a $634 billion reserve fund to underwrite the initial major step towards reforming our nation's health care system, an issue that many people perceive as the greatest threat to our country's fiscal sustainability. The second item is the proposed mechanism for paying for the bulk of that reform ($318 billion worth): the President's PROPOSAL to change the amount that "high income" people (the 1.2% of Americans with income greater than $250,000 a year) can deduct from their taxes (including for charitable donations), reducing the deduction from 33% or 35% (depending on the person's tax bracket) to the 28% rate that other itemizers can claim. Importantly, even if Congress agreed with the reduction, it would not apply to anyone until – at the earliest – January 2011. 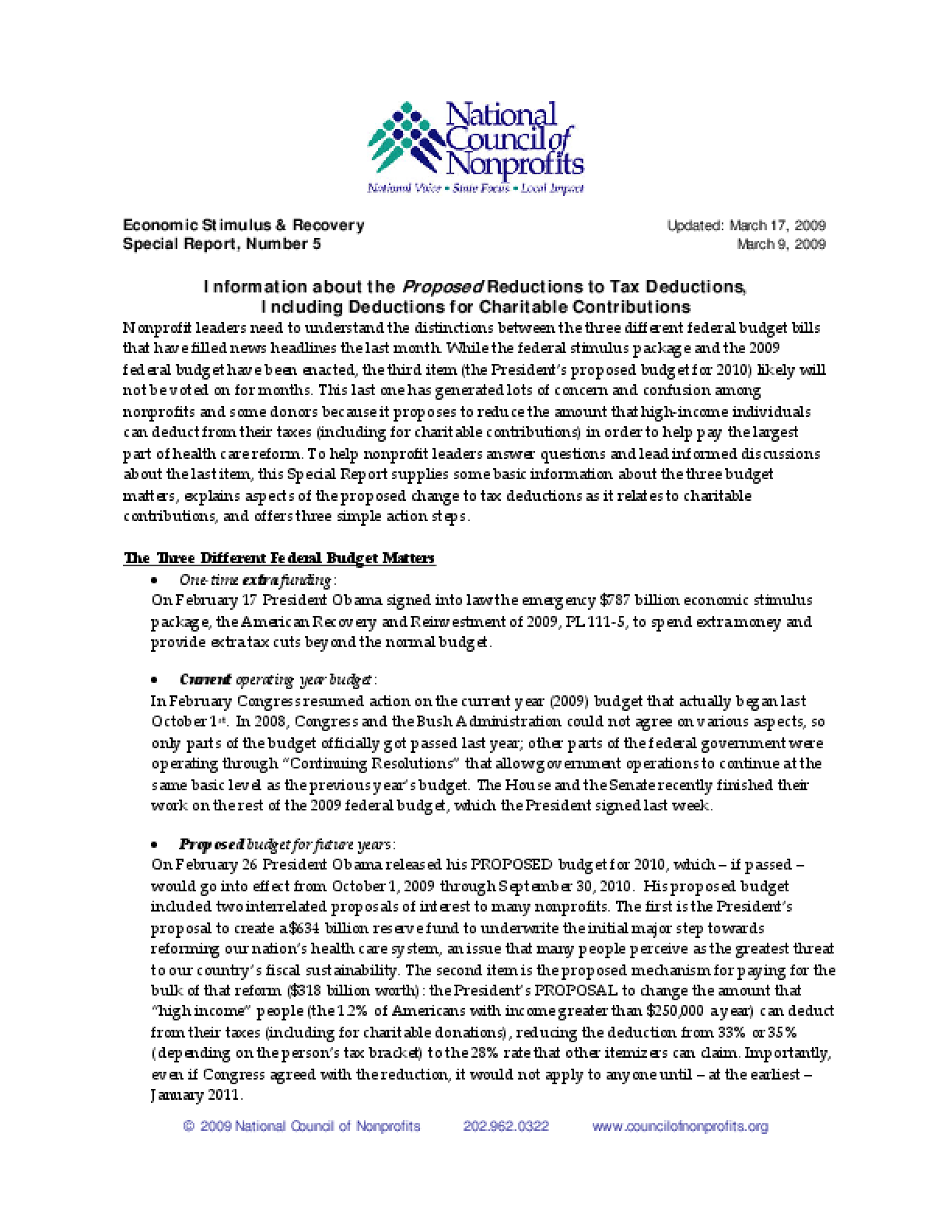