This report is in response to the 14th, 15th and 16th periodic reports of the State of Israel to the Committee on the Elimination of Racial Discrimination (CERD). This report demonstrates that Israel continues to ignore its international obligations towards asylum seekers and refugees which are predominately from sub-Sahara Africa. Various Israeli laws, policies and practices are racially discriminatory at their basis against this vulnerable population. For instance, Israel maintains a harsh policy of detention, tolerates segregation in the education system in Eilat and allocates temporary group protection to over 90 percent of the asylum seekers who arrive to Israel. As a result, asylum seekers live in constant fear of being returned to their countries of origin to face further persecution. The root of this discrimination stems from the tension created by Israel's sensitive political demographic status as a Jewish state. Several of Israel's high-ranking politicians have demonstrated an apparent lack of commitment in protecting the human rights of asylum seekers and eliminating racial discrimination. Their racially discriminatory and inciteful language, wholly adopted by the media, is at least partially responsible for generating the community-wide backlash against the asylum seekers that is documented in this report. This report is supplemented by a video report which provides visual documentation of the rising tide of hatred, fueled not only by certain Members of the Knesset but also by the Israeli community, and additional material not included in the written report. Whilst copies of the video have been provided to CERD, it can be viewed by members of the public at http://www.ardc-israel.org/en/articles/83. In closing ARDC offers recommendations where Israel could make advances in meeting its obligations under CERD. The report has been prepared with significant contribution by David Sheen, a journalist who has reported from Israel since 1999. In his work as a journalist, Sheen has extensively documented racial discrimination against many sectors in the Israeli community and particularly against the non-Jewish African asylum seekers. Together ARDC and Sheen are able to cite an extensive body of evidence to demonstrate that the Government of Israel has failed to meet its obligations under CERD with respect to this community. Additionally, our response to Articles 5(d) and 5(e)(v) regarding detention of unaccompanied minors and the segregation in the education system in Eilat were written with contributions from our partner organization Assaf -- Aid Organization for Refugees and Asylum Seekers in Israel. 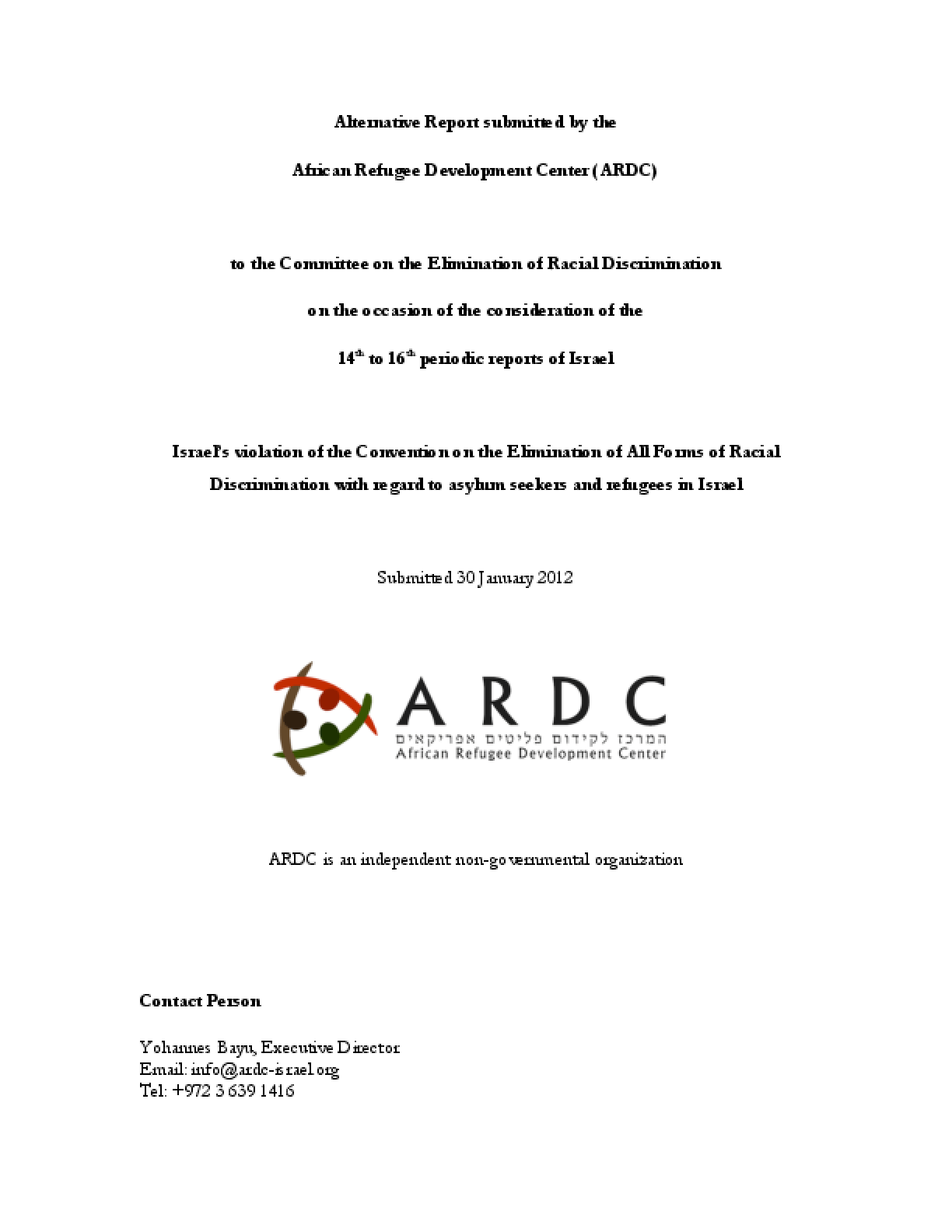