Left Behind: Social Movements, Parties, and the Politics of Reform

How does social reform occur in America? Is it through major public policy innovation? Is it through periodic partisan or electoral alignment? Or is it through moments of popular mobilization we call social movements? Can we explain the origin, development, and legacy of the civil rights movement by focusing on Brown v. Board of Education, Little Rock, the Civil Rights Acts of 1964 and 1965, bussing and affirmative action? Do we focus on the electoral dynamics, the liberal revolution in Congress in 1958, and the landslide reelection of the president in 1964? Or do we start with the Montgomery bus boycott, the sit-ins, SCLC, SNCC, CORE, the freedom rides, the marches, and other forms of direct action? In this paper I argue, first, that institutional constraints built into our electoral system inhibit the formation of social reform initiatives from the inside government officials, elected officials, or parties. Social reform initiatives are initiated, however, but from the outside, as social movements. Second, these social movements unfold in a uniquely American way. They make moral claims. They employ organizational forms to strategically link local action with national goals in intense, outcome focused, campaigns. And they develop leadership skilled in arts of collective action what de Tocqueville called knowledge of how to combine. Third, as social movement leaders find that achieving their goals requires new public policy, they gain leverage by engaging in electoral politics, most often aligned with a political party, which they may well transform in the process. Fourth, although social movements form and reform around fault lines in the American polity of race, ethnicity, religion, gender, class, and generation, in the last 30 years this dynamic has produced far more change on the right than on the left. One reason is that the right has made more robust linkages among its social movement base, its partisan politics, and public policy than the left.* Explaining how this process works and why the left lost its movement - may help explain why this has occurred and clarify options available to those who would change it. * Jacob Hacker and Paul Pierson, Off-Center: The Republican Revolution & the Erosion of American Democracy, (Yale University Press, 2005). The authors show how the conservative movement has leveraged its partisan influence to dominate public policy. This publication is Hauser Center Working Paper No. 34. The Hauser Center Working Paper Series was launched during the summer of 2000. The Series enables the Hauser Center to share with a broad audience important works-in-progress written by Hauser Center scholars and researchers. 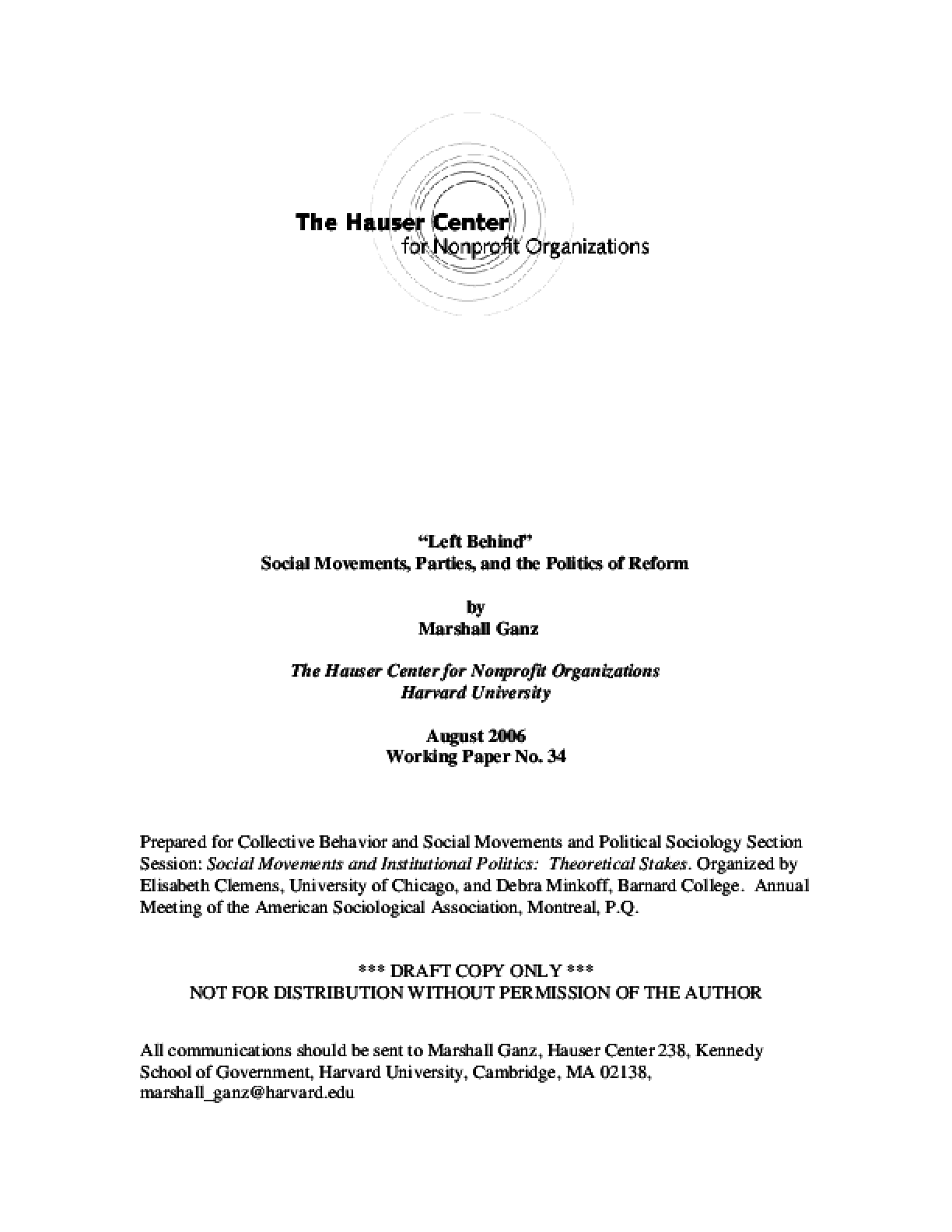