Locking Up Family Values: The Detention of Immigrant Families

On any given day the U.S. government has the capacity to detain over 600 men, women and children apprehended as family units along the U.S. border and within the interior of the country. The detention of families expanded dramatically in 2006 with the opening of the new 512-bed T. Don Hutto Residential Center. Although Hutto has become the centerpiece of a major expansion of immigration detention in America, it builds on and further institutionalizes many of the practices established at the smaller Berks Family Shelter Care Facility in Leesport, PA, where U.S. Immigration and Customs Enforcement (ICE) has detained a small number of families since 2001. The recent increase in family detention represents a major shift in the U.S. government's treatment of families in immigration proceedings. Prior to the opening of Hutto, the majority of families were either released together from detention or separated from each other and detained individually. Children were placed in the custody of the Office of Refugee Resettlement (ORR) Division for Unaccompanied Children's Services, and parents were detained in adult facilities. Congress discovered this and took immediate action to rectify it, in keeping with America's tradition of promoting family values. It directed ICE to stop separating families and either to place them in alternative programs or to detain them together in nonpenal, homelike settings. Such Congressional directives were intended to preserve and protect the role of the family as the fundamental unit in our society. However, ICE chose to develop a penal detention model that is fundamentally anti-family and un-American. Lutheran Immigration and Refugee Service and the Women's Commission for Refugee Women and Children felt it vital to examine the implications of this expanding penal approach to family detention in order to inform the development of policy and practice that serves the best interests of children and families. To that end we visited both the T. Don Hutto Residential Center and the Berks Family Shelter Care Facility and talked with detained families as well as former detainees. What we found was disturbing: - Hutto is a former criminal facility that still looks and feels like a prison, complete with razor wire and prison cells. - Some families with young children have been detained in these facilities for up to two years. - The majority of children detained in these facilities appeared to be under the age of 12. - At night, children as young as six were separated from their parents. - Separation and threats of separation were used as disciplinary tools. - People in detention displayed widespread and obvious psychological trauma. Every woman we spoke with in a private setting cried. - At Hutto pregnant women received inadequate prenatal care. - Children detained at Hutto received one hour of schooling per day. - Families in Hutto received no more than twenty minutes to go through the cafeteria line and feed their children and themselves. Children were frequently sick from the food and losing weight. - Families in Hutto received extremely limited indoor and outdoor recreation time and children did not have any soft toys. Yet not everything we saw reflected a failure of the system. At the Berks facility: - The educational system was appropriate to children's developmental needs. - Families were permitted to participate in field trips. - Children were able to participate in arts and crafts activities. - Families enjoyed ample outdoor recreation time in an open, grassy area. But despite these few positives, the system of family detention is overwhelmingly inappropriate for families. - Both settings strip parents of their role as arbiter and architect of the family unit. - Both facilities place families in settings modeled on the criminal justice system. - There are no licensing requirements for family detention facilities because there is no precedent for family detention in the United States. - There are no standards for family detention, but both facilities violated various aspects of existing standards for the treatment of unaccompanied children and adults in immigration proceedings. Neither facility provides an acceptable model for addressing the reality of the presence of families in our immigration system. Although there is precedent in the adult detention system for the use of alternatives to detention and other pre-hearing release systems,4 ICE has unfortunately made no effort to expand these programs to include families. Based upon these findings, we recommend the following systemic changes to the U.S. government's treatment of families in immigration proceedings: - Discontinue the detention of families in prison-like institutions. - Parole asylum seekers in accordance with international standards and DHS's own policy guidelines - Expand parole and release options for apprehended families. - Implement alternatives to detention for families not eligible for parole or release. - House families not eligible for parole or release in appropriate, nonpenal, homelike facilities. - Expand public-private partnerships to provide legal information and pro bono legal access for all detained families, and to implement alternative programs. 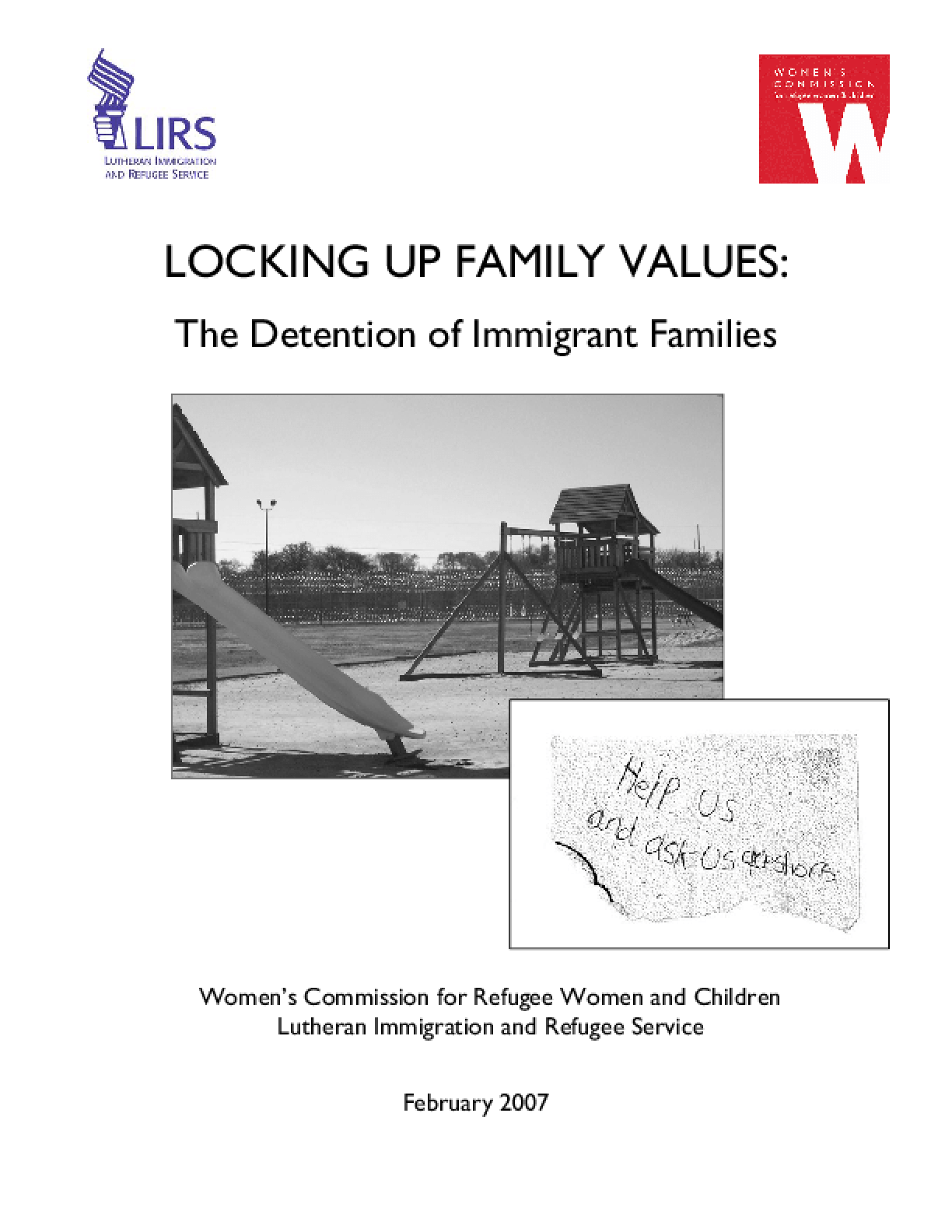