Do all Americans have equal access to the arts? Are the arts accessible and inclusive for all communities? National rates of arts participation as measured by attendance at live benchmark events have been trending down for the past few decades. Consequently, a narrative of arts decline in the US has been largely accepted, even as some accounts show cultural engagement experiencing a renaissance enabled by advanced communication technologies and changing demographics.

This report, informed by a review of practitioner and academic literature, charts the concerns of arts stakeholders surrounding public arts engagement since about 2000, beginning with the discovery of a statistically significant decline in benchmark attendance as observed in the Survey of Public Participation in the Arts (SPPA). It also traces the role of the "informal arts" (folk, traditional and avocational arts) in broadening the definition of arts and cultural participation.

Authors Henry Jenkins and Vanessa Bertossi (2007) have suggested that we are living in a "new participatory culture" distinguished by four factors:

2. Strong support for creating and sharing what one creates with others;

3. Transmission of knowledge and skills through informal mentorship networks; and

4. A degree of social currency and sense of connectedness among participants

This new culture makes measuring arts participation more difficult because traditional distinctions between amateur and professional, hobbyist and artist, and consumer and producer are blurring. Broadening the definition of arts participation to include leisure time investment in creative pursuits and arts-making helps enlarge the definition of art's value to society (Ramirez, 2000). Expanding our sense of "what counts" initiates new conversations by reframing the old question "Why aren't people attending?" as "What are people doing with their creativity-focused leisure time?" New cultural indicators are revealing the value of arts and culture in people's everyday lives, shifting the narrative about arts participation in the early twenty-first century from decline to resurgence.

Even as both the concept and measurement of "engagement" in the arts has evolved over time, the understanding of the purpose of that engagement has varied. For some organizations, engagement has meant creating new inroads to existing programming. For others, engagement has meant developing new programs to capture the attention of new audiences. In 2015, this conversation took a new direction as people moved from talking about engagement as a process to focusing instead on a key outcome: cultural equity and inclusion. In Los Angeles County, as well as across the U.S., arts organizations began to focustheir attention on ensuring that everyone has access to the benefits offered by the arts. Viewed through this lens, this literature review should be seen as a companion – a prequel, even – to the literature review on cultural equity and inclusion published by the Los Angeles County Arts Commission in March 2016. 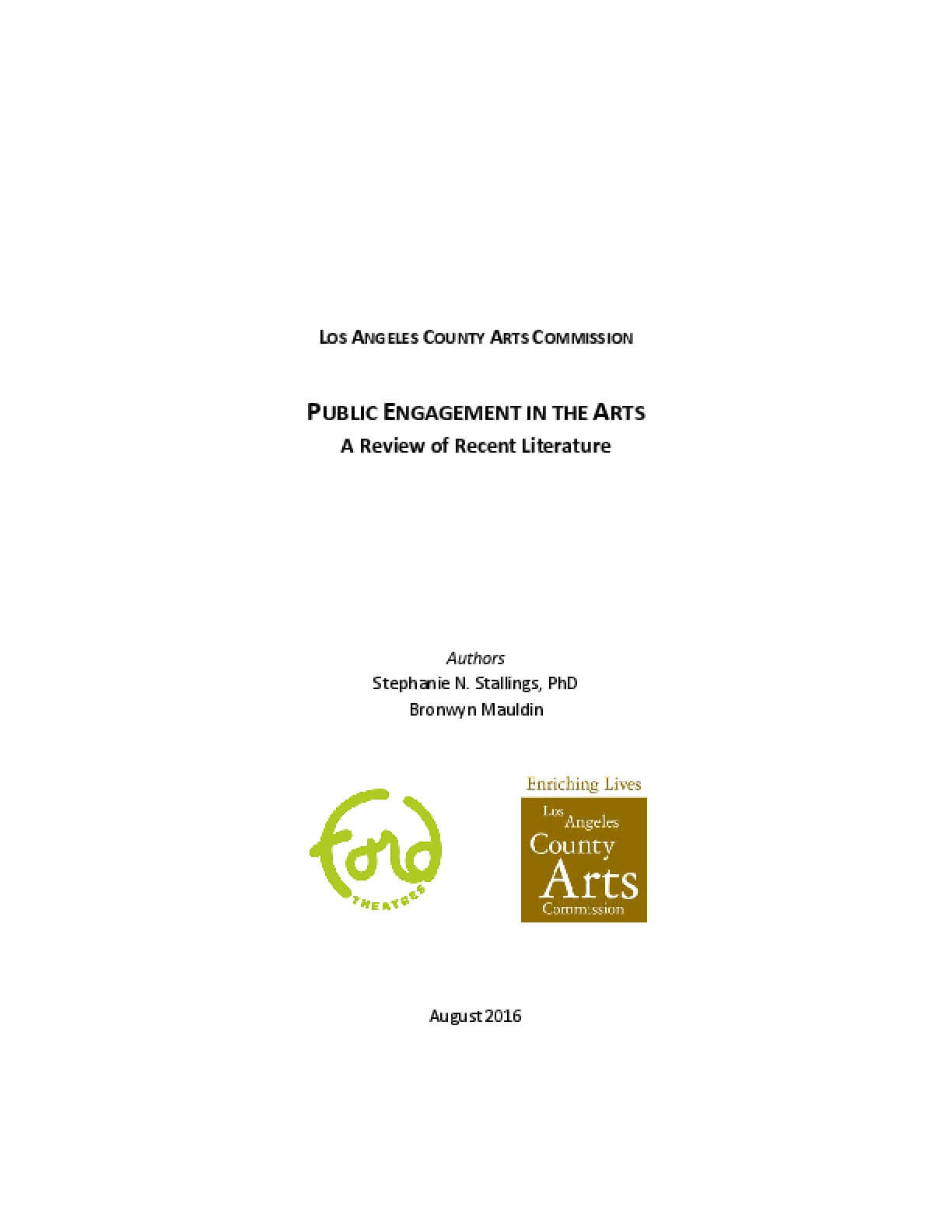