Maintaining Success Rates: Does Statway Sustain It's Impact as It Scales to New Classrooms and Institutions?

Statway is an accelerated developmental mathematics intervention program for college students who are not yet prepared to succeed in a college-level math course. The Carnegie Foundation for the Advancement of Teaching created the initiative to increase student success rates in developmental mathematics and subsequent credit-bearing, college-level mathematics. Statway differs from traditional developmental mathematics sequences in that it allows students to complete both their developmental and college-level mathematics requirements in a single pathway over the course of one academic year. A previous study (Yamada & Bryk, 2016) found that students—across all sex and race/ethnic groups—who enrolled in Statway, had higher rates of completion for both developmental and college-level math compared to carefully matched students in traditional developmental math programs. Statway provides a multifaceted approach to addressing challenges that impede student success through psychosocial and academic supports, as well as lessons based on examples relevant to students' lives. The course is structured so the same cohort of students is enrolled in a consecutive twoterm sequence with the same faculty instructor, students work collaboratively, and instructors learn and apply new and more interactive teaching methods. Faculty also receive professional development and support through a networked improvement community (NIC) that connects them with other practitioners, administrators, and researchers from diverse institutions across the nation. We assessed the effectiveness of the program in its third and fourth years by utilizing a multilevel modeling approach with propensity score matching to compare Statway student outcomes with their counterparts in traditional developmental mathematics programs. We found that in comparison to traditional developmental mathematics students, Statway students had a significantly higher likelihood of successfully attaining college-level mathematics credit— even when comparison group students were allowed twice the amount of time to achieve the same outcome. These results are consistent across all sex and race/ethnic subgroups, as well as in almost all participating classrooms and institutions. Additionally, in replicating earlier findings from the first two years of the program, the results suggest that Statway continues to advance equitable outcomes even as it scales to greater numbers of students in an increasing number of institutions. This report also suggests potential areas for future investigation and research. CARNEGIE STATWAY SUCCESS 3 This report provides an important sequel to the Carnegie Foundation's previous assessment of the effectiveness of the first two years of Statway® , a mathematics program designed to expedite the process by which students may fulfill their developmental requirements and earn college mathematics credit. Employing a multilevel modeling technique with propensity score matching, the previous peer-reviewed study found that Statway considerably improved college mathematics success rates among students from the 2011 and 2012 cohorts (Yamada & Bryk, 2016). Since then, Statway has continued to scale within current institutions and spread to new ones, nearly doubling its enrollment and expanding its geographic reach to three new states, and expanding in total four-fold since it began five years ago (Huang, Hoang, Yesilyurt, & Thorn, 2016). Scaling innovations in education is notoriously difficult (Cannata & Nguyen, 2015). Thus, the current study, which focuses on the third and fourth years of Statway's implementation, seeks to further substantiate Statway as an evidence-based initiative by replicating results from the previous analysis. To better inform our efforts to address challenges in scaling Statway, the study also examines variation in performance across instructors and institutions. 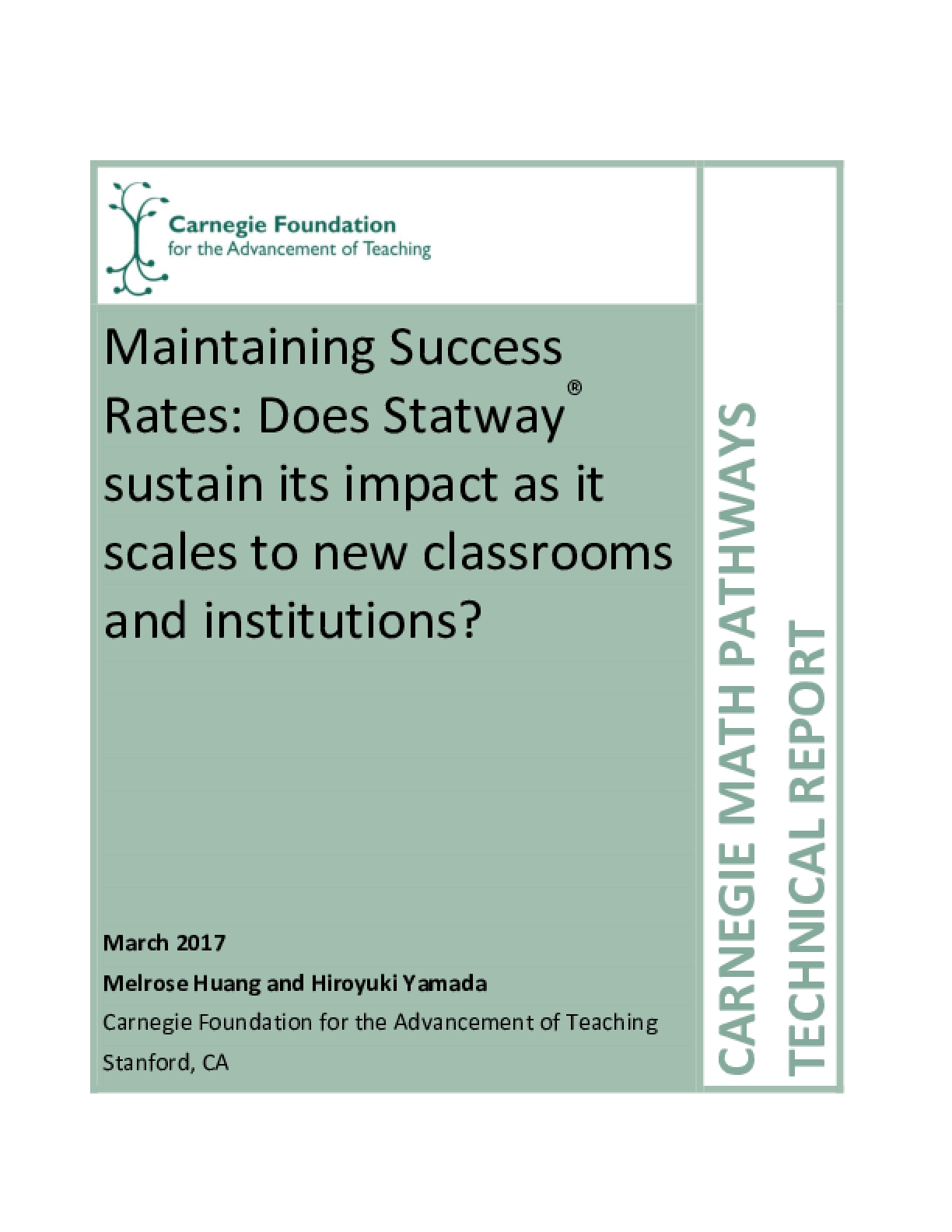