Masculinities: Male Roles and Male Involvement in the Promotion of Gender Equality A Resource Packet

At the 48th session of the United Nations Commission on the Status of Women in March 2004, participating governments agreed an important set of conclusions on "the role of men and boys in achieving gender equality" and urged all key stakeholders, including governments, UN organizations and civil society, to promote action at all levels in fields such as education, health services, training, media and the workplace to increase the contribution of men and boys to furthering gender equality.1 In order to initiate work on gender equality and male involvement therein, critical examination of men's power and privilege and current constructs of "masculinities" are necessary prerequisites. Seventy percent of the 1.3 billion people worldwide living in extreme poverty are women and girls. Gender discrimination is a major cause of poverty and, in many countries, women still have great difficulties securing basic education, finding employment and having fair control over household income. Until gender discrimination is ended, through the mainstreaming of gender issues and the promotion of gender equality, these issues cannot be successfully addressed. The patterns of domination, though, may be so deeply embedded in cultures and institutions that we may not even recognize them: boys getting more food than girls; streets where women walk only under threat; the interruption of women's speech in conversation. Awareness, analysis and visibility are, hence, key starting points in our task of understanding gender roles and masculinities and their impact on our programs and services targeting persons of concern. Male inclusion in the gender mainstreaming process has increasingly been documented as vital to the success of mainstreaming efforts. It is well understood that the achievement of gender equality is not possible without the active involvement and support of men. Men must be reached and included so that interventions for women and girls are not derailed by male resistance. Too often sidelined as a women's issue, gender mainstreaming and gender equality stagnate as peripheral issues with considerable lip service but little tangible movement. We still fail to understand men's roles and responsibilities in working toward a gender equitable world. We fail to grasp their reluctance to become involved. We fail to analyze how masculinity limits and inhibits male participation. Additionally, we fail to articulate the negative effects on men of perpetuating a gender unequal world and the potential positive ramifications -- for men -- of gender equality. We need to develop approaches and strategies for male inclusion in the gender equality process. We need to deepen our understanding of the resistance encountered, document what works and develop tools for field-based use. We need to bring men and boys front and center, in line and in place with women and girls, in the promotion of gender mainstreaming and in the march for gender equality. We need to stress that promoting gender equality is not about granting privileges to women while disempowering men. It is about creating integrated approaches that benefit all. It is about creating a more socially just world. Displaced populations, often unaffected by national policies and priorities, may remain marginalized by national government gender mainstreaming efforts. Service providers to these populations may have little awareness of gender issues. They may be reluctant to interfere with local cultural practices. They may be unaware of how resources and power are monopolized by male members of the community and the impact this has on women and girls. This resource packet attempts to broaden understanding of masculinities, the role and need for male inclusion in the gender mainstreaming process, how gender inequality impacts both men and women, and to provide thoughts for the way forward. Much of the information provided is generic, but its intent is to target service providers working with displaced populations as a means of strengthening their approaches and interventions in order to enhance gender mainstreaming in their work. Finally, tools are provided to assess male and female participation and measure good practice. 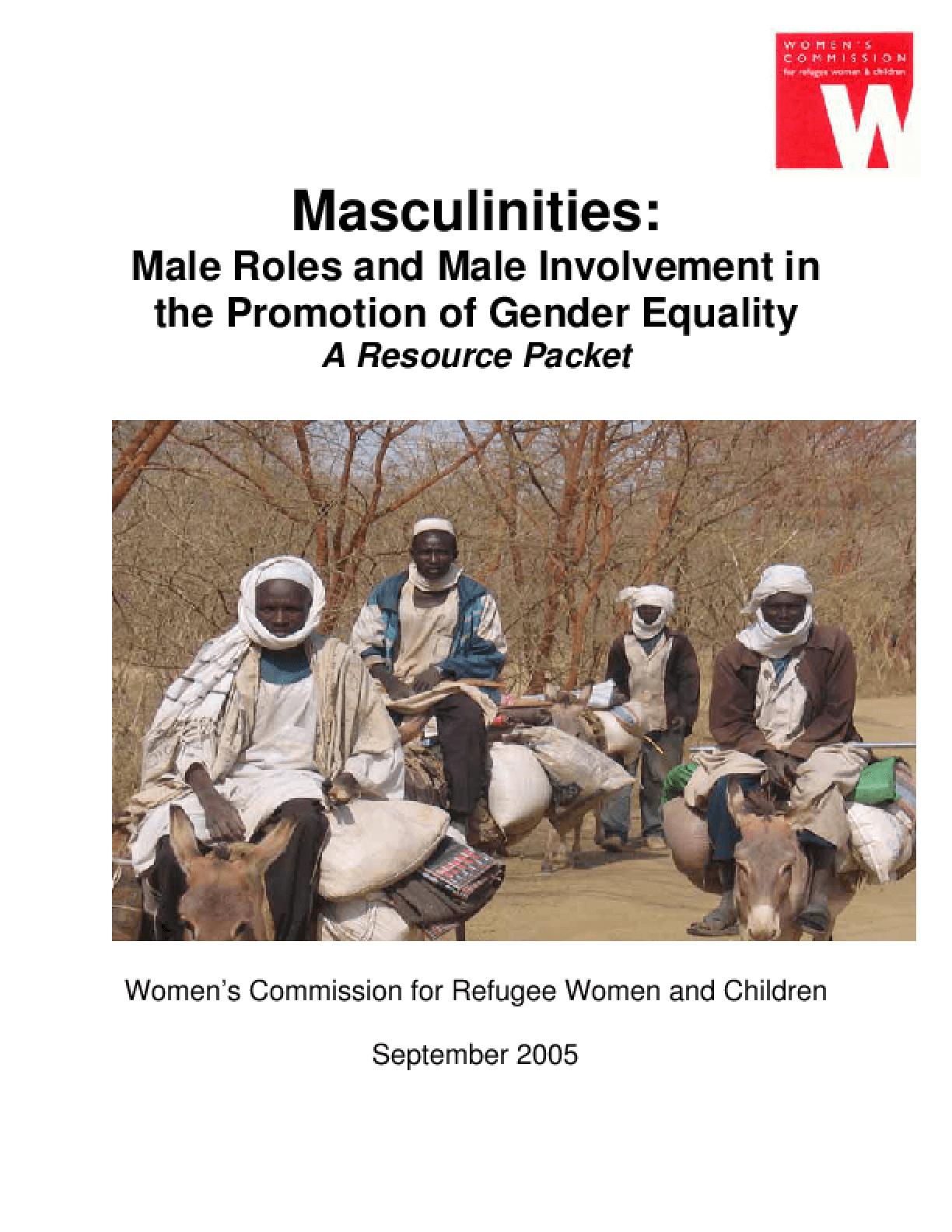