In 2010, the Conference of Parties of the Convention on Biological Diversity (CBD) agreed to an ambitious set of 20 targets, called the Aichi Biodiversity Targets, as part of their commitment to the CBD Strategic Plan. One of the Targets (Target 17) called for each country to revise its National Biodiversity Strategies and Action Plan (NBSAP) in accordance with the Aichi Biodiversity Targets. From 2010 to November 2016, virtually all countries have revised, or are currently completing the revision of, their NBSAP. As of November 2016, 123 countries (76 of them eligible for official development assistance) have submitted post-2010 NBSAPs. At the same time, the world agreed to an ambitious set of 17 Goals and 169 Targets in 2015, called the Sustainable Development Goals (SDGs).

The absence of a widely accepted taxonomy for describing NBSAP actions makes any systematic and cross-cutting analysis of NBSAPs difficult. Moreover, the collective contribution of specific NBSAP actions to SDGs has not yet been studied. The purpose of this report is to systematically understand the breadth and depth of actions proposed across all NBSAPs, to propose a common framework for analysis, and to understand the relationship between NBSAPs and the SDGs

The data in this report comes from more than 6000 actions included in NBSAPs of 60 countries. These NBSAPs have all been submitted to the Secretariat of the CBD after 2010, and all are from countries eligible to received funding from the Global Environmental Facility.

The researchers tagged each of the actions in this analysis not only by the thematic categories and generic actions of this taxonomy, but also by the associated primary and secondary SDGs and their associated targets (as well as by Aichi Biodiversity Targets). In doing so, the collective impact of the contribution of NBSAPs toward fulfilling the SDGs is beginning to emerge. The data from this analysis are far richer and more complex than this interim report can convey. However, it is clear from this preliminary analysis that the impact of NBSAP actions extends far beyond Goal 14 (Life Below Water) and Goal 15 (Life on Land). The NBSAP examples of actions provided under each of the categories illustrate how a single action can contribute to multiple goals. The actions included across all NBSAPs would, if fully implemented, catalyze progress in national food security, water security, livelihoods, economic growth, disaster risk reduction, health, gender and climate resilience, among other goals. Furthermore, because NBSAPs are adopted as policy instruments, they provide a ready pathway for fast implementation of national sustainable development goals.

The recommendations included at the end of this report highlight the potential need for targeted support to countries to implement key thematic areas. The authors hope that this preliminary analysis will enable governments, and the organizations that support them, to focus their efforts on supporting those thematic areas that will have the most impact in accelerating progress in implementing NBSAP actions. They also hope this report will encourage donor organizations to consider supporting the implementation of NBSAP actions that have direct SDG outcomes. 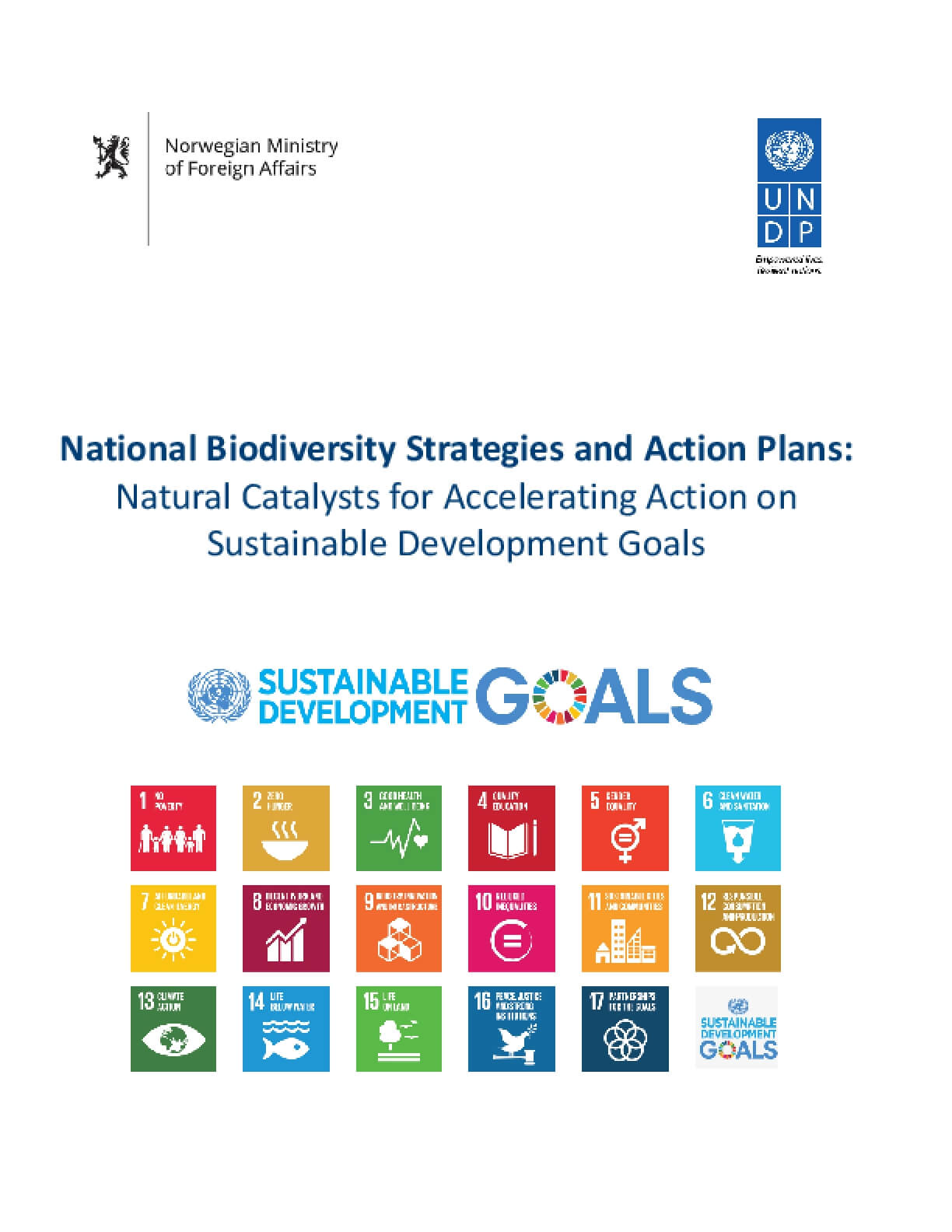