"On the Beat": New Roles and Challenges for Immigrant Police and Firefighters

The mainstream media, conservative politicians, and even some police organizations continue to promote stereotypes of immigrants as insufficiently "loyal" to America to serve in law-enforcement jobs. Ironically, similar fears were expressed about earlier generations of Irish and Italian immigrants whose dedicated public service helped usher in the modern urban police department. Today, immigrants are once again a vital part of law enforcement as patrol officers and detectives, and in a wide range of police auxiliary roles. Immigrants are also making important contributions to local communities as municipal firefighters and seasonal workers contracted by the federal government to fight deadly and destructive wild fires. America's streets are unquestionably safer and our neighborhoods more peaceful thanks to the growing number of immigrants available to serve and protect. There were about 46,000 foreign-born police officers and detectives and 9,700 foreign-born firefighters on the job as of 2006. Roughly 6 percent of police patrol officers and detectives, and 5 percent of firefighters, were foreign-born. Police are four times more likely to be foreign-born and firefighters are twice as likely to be foreign-born than they were in 1995. Although the foreign-born as a percent of all police and fire department personnel has risen steadily over the past 10 years, it remains well below the foreign-born percent of the total U.S. population. Moreover, it is dwarfed by the percentage of foreign-born workers in "immigrant-heavy" industries like agriculture, construction, and food service. A mong the police, a higher share of the foreign-born are employed as detectives (7.6 percent) than as patrol officers (5.1 percent). This is largely due to the nature of undercover police work, which can involve international crime syndicates as well as global terrorist organizations. Police detectives require special skills to operate in this milieu, including foreign-language fluency and, on occasion, an ability to literally "blend in" with foreign nationals or foreign-born residents of the United States. In New York, which is a major target and arena for global drug and terrorism activities, one-third of the state's police detective force is foreign-born. By contrast, California does not have a disproportionately high proportion of foreign-born police detectives, but 10 percent of the state's patrol officers are foreign-born. Relaxing current U.S.-citizenship requirements for police officers would allow state and local governments to recruit a much larger number of foreign-born applicants to perform vital community-policing roles. In addition, renewed funding for the highly successful COPS community-policing program would enable financially strapped police forces to retain more foreign-born personnel. 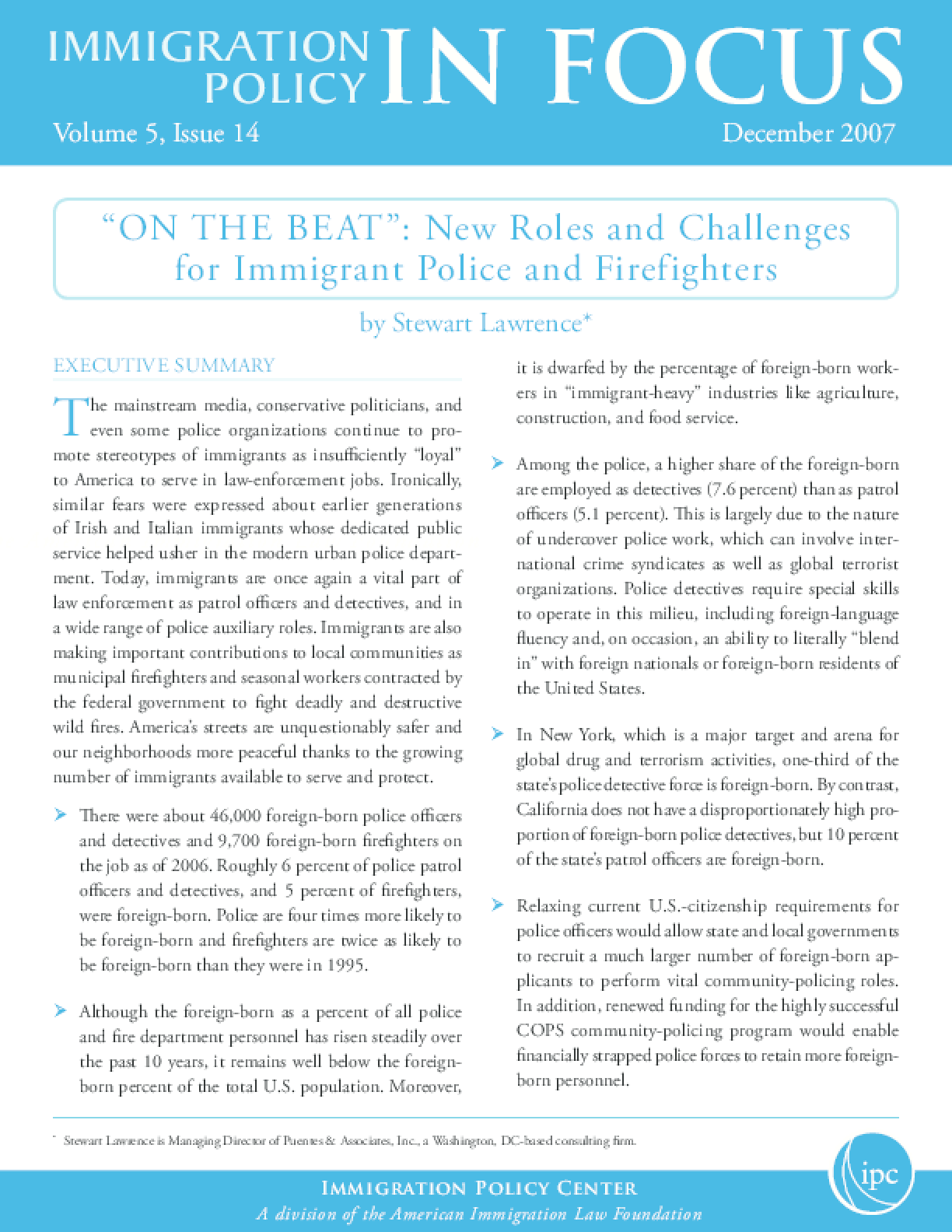