Beginning in the mid-to-late-1980s, state policymakers began to rethink their strategies for influencing curriculum and instruction in public education and adopted a policy strategy known as standards-based, systemic reform.

The rapidity with which the idea of standards-based, systemic reform took hold is remarkable, if not without historical precedent in the strongly networked field of education. Originally incubating quietly in the enclaves of professional subject-matter associations like the National Council of Teachers of Mathematics, efforts to set standards and articulate systemic reforms based on them were soon generated by nearly every state in the union (American Federation of Teachers, 1995) and a large array of urban, suburban and rural districts. Support came from the U.S. Department of Education, the National Science Foundation, and associations as diverse as the Business Roundtable, the National Governors Association, and the American Federation of Teachers. Indeed, standards-based reform enjoyed high bipartisan consensus.

But this consensus began to fray somewhat as standards-based reform ideas were translated into real policies. Federal policy efforts, notably Goals 2000 and the reauthorized Elementary Secondary Education Act, and some of the state reforms, occasioned significant debates about the possibility of greater control over localities traditional autonomy in the area of curriculum. For example, Congressional and state-level policymakers strongly challenged such elements as the national panel envisioned by Goals 2000 that would have had the authority to certify the quality of states standards.

This issue of CPRE Policy Briefs takes a look at how, against this backdrop, standards-based, systemic reforms evolved in nine states during the 1994-95 period. Our research is based on in-depth interviews with policymakers and educators in California, Connecticut, Florida, Georgia, Kentucky, Minnesota, New Jersey, South Carolina and Texas and in 25 districts in those states. The focus of this brief is to analyze the persistence and transformation of these new instructional guidance strategies, and the issues and challenges they have confronted.

The research presented in this policy brief is part of CPRE's Systemic Reform Study, a joint project conducted by the Policy Center of CPRE in conjunction with the National Center for Research on Teacher Learning (NCRTL). The project was funded by the U.S. Department of Education's Office of Educational Research and Improvement (OERI). 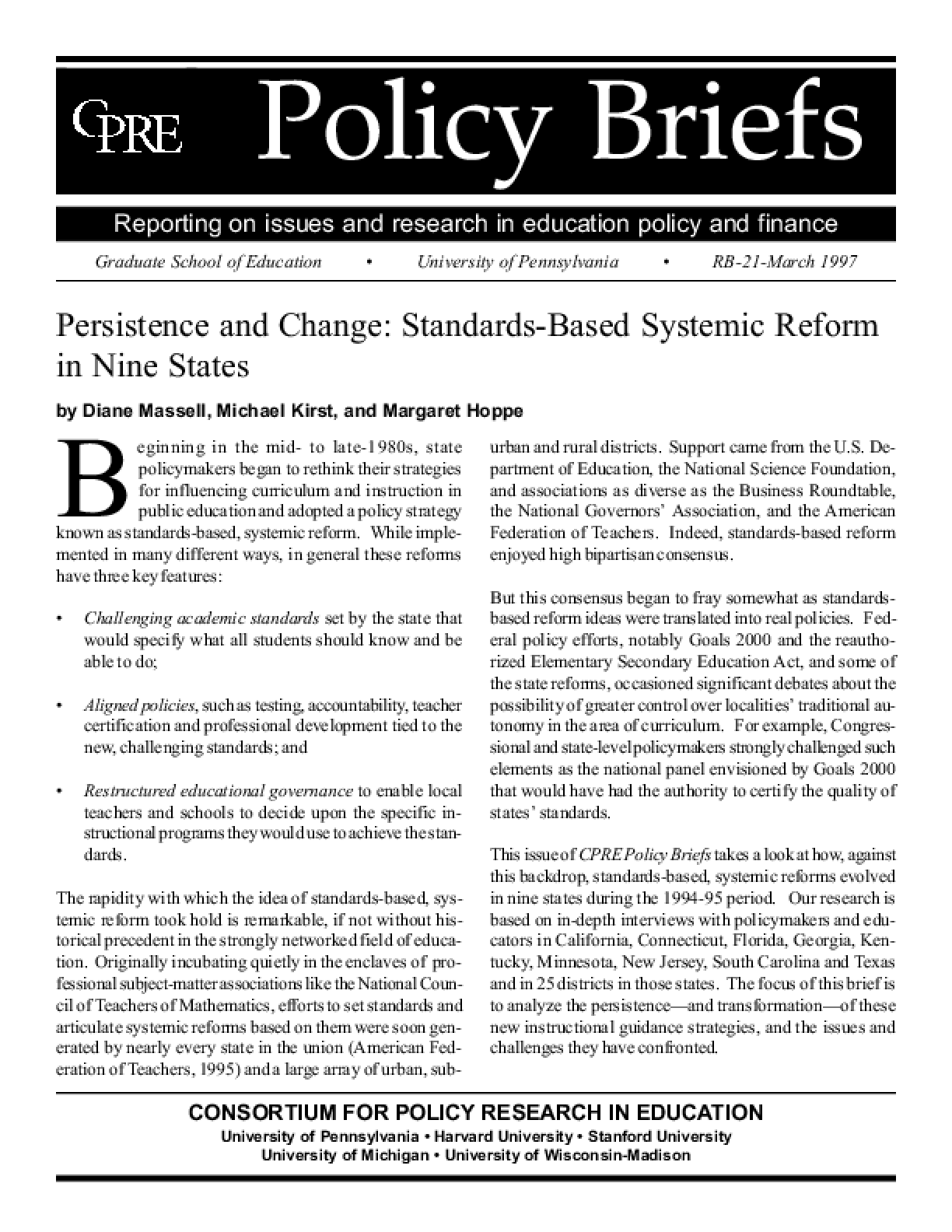