Tim Horn and Richard Jefferys present an overview of developments in their "Preventive Technologies: Antiretroviral and Vaccine Development" chapter.

The current paradigm is shifting not only to universal immediate ART among those living with HIV, but to intensified biomedical prevention efforts focusing on pre- and post-exposure prophylaxis (PrEP, PEP), as well as increased use of other prevention modalities such as harm reduction, syringe exchange, opiate substitution therapy, and voluntary male medical circumcision. As Horn and Jefferys write, [this] "fierce commitment to primary biomedical prevention… isn't simply rhetoric, but rather a public health mandate that is supported by a growing body of epidemiological and other scientific data.

In the U.S., where tenofovir disoproxil fumarate (TDF)/emtricitabine (FTC) were first approved for use as PrEP in mid-2012, just 4% of the estimated 1.2 million U.S. residents who might benefit from its use are or have used it. To make a public health impact, however, PrEP will have to be scaled up to reach almost half of high-risk MSM, as well as at least 10% of people who inject drugs and among high-risk heterosexual persons, who may not even realize they are at risk for contracting HIV.

In the U.S., failure to expand Medicaid in states where HIV is infecting the most people today – such as young MSM of color, particularly in the South, creates often-insuperable obstacles for those who need PrEP the most. Elsewhere, PrEP has only been approved in a handful of countries and, even where it is approved and subsidized, high levels of provider stigma or ignorance plus lack of HIV prevention education among at-risk individuals impedes its successful uptake at the requisite scale. Other potential PrEP approaches now under study include oral maraviroc (MVC) or TAF instead of TDF, but these are in early stages still.

Long-acting (LA) injectable ART such as cabotegravir, if shown safe and effective, could potentially be used as PrEP.

A variety of genital gels, rings, tablets, and films are also being investigated for potential preventive therapy indications in both women and men. There is also tremendous interest in multi-purpose biomedical prevention technologies, notably ring and other extended-release delivery systems that can provide broad-spectrum protection against multiple viral infections -- HIV, herpes simplex virus 2 (HSV-2), and human papillomavirus (HPV) -- as well hormonal contraception.

NIH is launching large-scale efficacy trials to see whether infusions of broadly-neutralizing HIV antibodies such as VRC01 can be used as a durable HIV prevention intervention[33]; but – as with treatment – it's possible that combinations of antibodies will be more effective both in protecting from infection and in preventing the rapid emergence of resistance among those exposed.

The long-awaited successor study to RV144, the only HIV vaccine trial that has shown even a marginal level of statistically-significant protection, is finally close to being launched.  "The trial, HIV Vaccine Trials Network (HVTN) 702, is designed to try and duplicate or improve on the 31.2% reduction in risk of HIV acquisition that was observed in RV144, a large-scale evaluation of a prime-boost vaccine regimen that was conducted in Thailand. HVTN 702 will take place in South Africa and, if all goes according to plan, results are anticipated by 2020."

In the vaccine field, a whopping 52 candidate vaccines are in various stages of clinical trials, as well as three studies of passive immunization with the NIH's VRC01 and one antibody gene transfer study; see Table 4: HIV vaccines, passive immunization, and antibody gene transfer pipeline. The contrast with the TB vaccine field – with only 14 candidates in clinical trials (see Table 1: TB Vaccines in Development, in Mike Frick's TB Prevention Pipeline chapter – is stark, though both fields face analogous challenges trying to develop protective immunity against tough and complex intracellular pathogens. 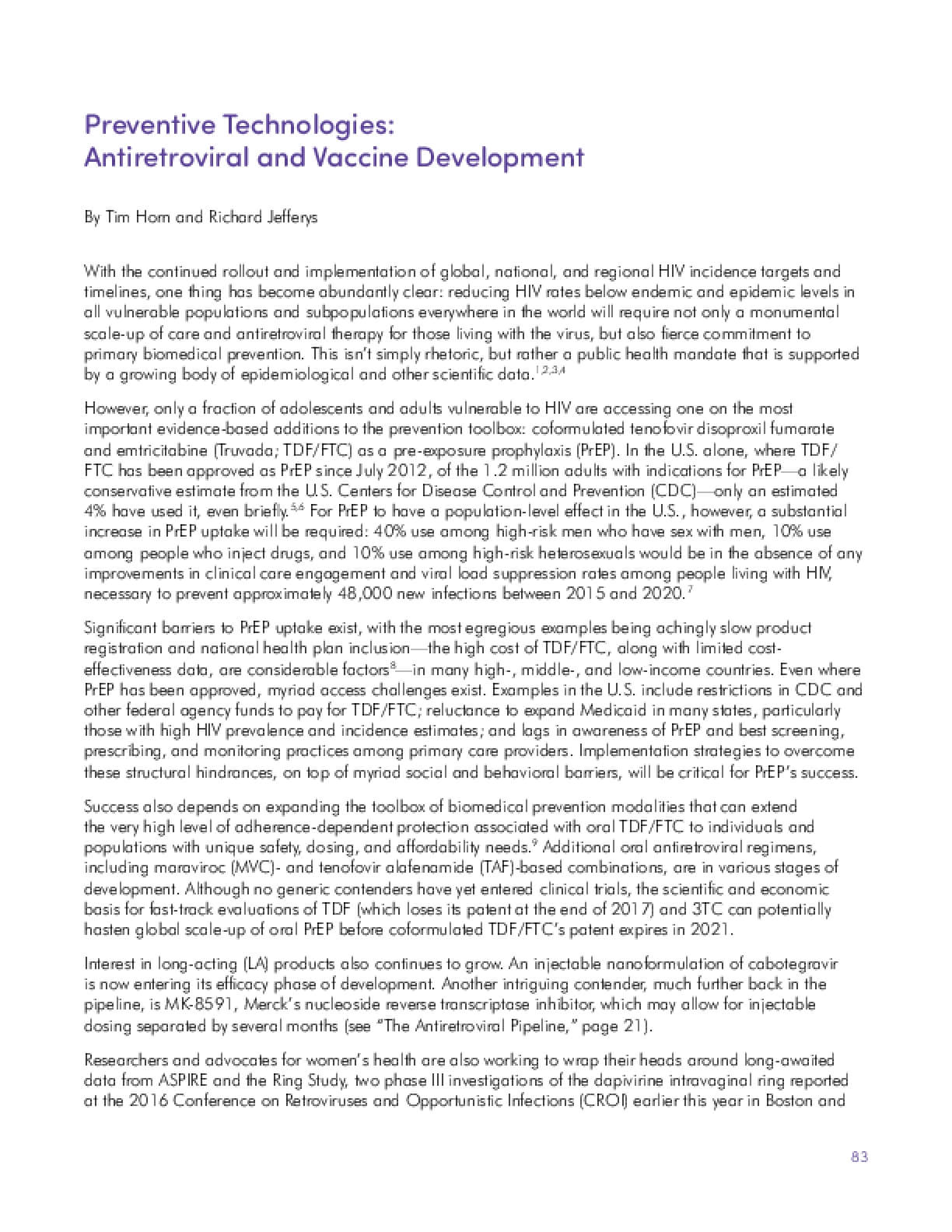