Publishing Primary Data on the World Wide Web: Opencontext.org and an Open Future for the Past

More scholars are exploring forms of digital dissemination, including open access (OA) systems where content is made available free of charge. These include peer -reviewed e -journals as well as traditional journals that have an online presence. Besides SHA's Technical Briefs in Historical Archaeology, the American Journal of Archaeology now offers open access to downloadable articles from their printed issues. Similarly, Evolutionary Anthropology offers many full -text articles free for download. More archaeologists are also taking advantage of easy Web publication to post copies of their publications on personal websites. Roughly 15% of all scholars participate in such "self -archiving." To encourage this practice, Science Commons (2006) and the Scholarly Publishing and Academic Resources Coalition (SPARC) recently launched the Scholar Copyright Project, an initiative that will develop standard "Author Addenda" -- a suite of short amendments to attach to copyright agreements from publishers (http://sciencecommons. org/projects/publishing/index.html). These addenda make it easier for paper authors to retain and clarify their rights to self -archive their papers electronically. Several studies now clearly document that self -archiving and OA publication enhances uptake and citation rates (Hajjem et al. 2005). Researchers enhance their reputations and stature by opening up their scholarship. Mounting pressure for greater public access also comes from many research stakeholders. Granting foundations interested in maximizing the return on their investment in basic research are often encouraging and sometimes even requiring some form of OA electronic dissemination. Interest in maximizing public access to publicly financed research is catching on in Congress. A new bipartisan bill, the Federal Research Public Access Act, would require OA for drafts of papers that pass peer review and result from federally funded research (U.S. Congress 2006). The bill would create government -funded digital repositories that would host and maintain these draft papers. University libraries are some of the most vocal advocates for OA research. Current publishing frameworks have seen dramatically escalated costs, sometimes four times higher than the general rate of inflation (Create Change 2003). Increasing costs have forced many libraries to cancel subscriptions and thereby hurt access and scholarship (Association for College and Research Libraries 2003; Suber 2004). This article originally published in Technical Briefs In Historical Archaeology, 2007, 2: -11. 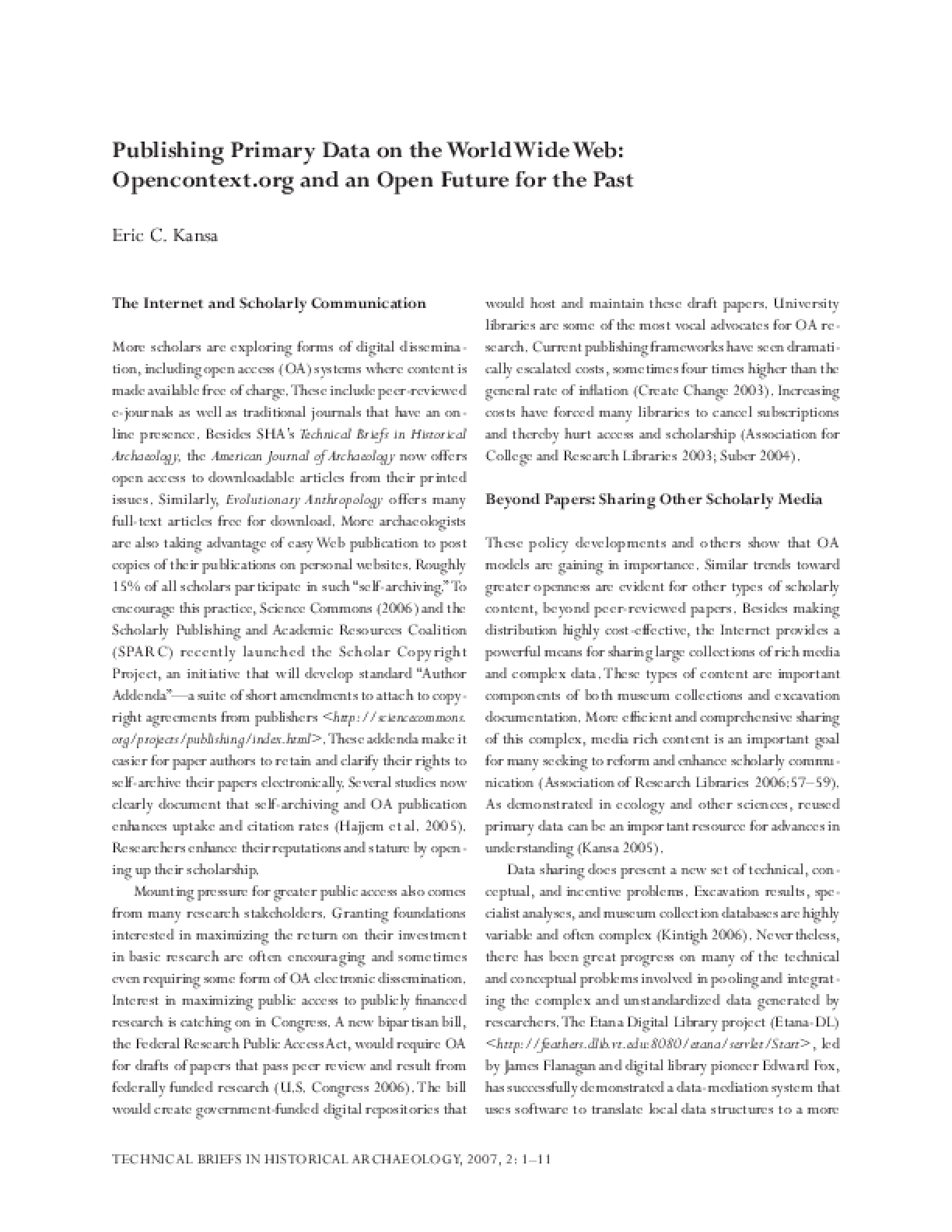