Punishment Is Not a "Service"

In the past two years, community organizers and advocates have made dramatic headway in the fight to end money bond and pretrial incarceration in Cook County. The most significant and recent victory is the introduction of General Order 18.8A by Cook County Chief Judge Timothy Evans, effective September 18, 2017.

Following litigation and public pressure to reduce the number of people locked up in Cook County Jail only because they cannot pay a monetary bond, the order is supposed to ensure that judges do not set money bond except in amounts that people can pay. If followed, the order represents a dramatic shift away from unpaid money bond as the primary driver of pretrial incarceration and toward a new respect for the presumption of innocence in Cook County. Chicago Community Bond Fund (CCBF) and our partners in The Coalition to End Money Bond are currently working to ensure that the order is fully implemented and that no one is incarcerated in Cook County Jail solely because they cannot pay a money bond.

As more people are diverted from the jail, CCBF is increasing our focus on what is happening to those individuals who previously would have been incarcerated. Through our work posting bond for people who cannot afford it themselves and observing Central Bond Court, CCBF has consistently observed conditions of pretrial release that operate as a form of pretrial punishment. Since 2015, CCBF has posted bond to free 98 people. Of these people, more than one in four were subjected to punitive pretrial conditions, including electronic monitoring, overnight or 24-hour curfews, monthly check-ins with a Pretrial Services officer, and drug testing—all after we posted their significant monetary bonds. These conditions are ordered by the court, most often by judges in bond court, and overseen by either the Pretrial Services Division or the Sheriff's Office.

Under the guise of helping accused people come back to court and avoid re-arrest, pretrial conditions restrict the liberty of innocent people and even mimic the same harms as pretrial incarceration, causing loss of jobs, housing, access to medical care and putting severe strain on social support networks and family members. Pretrial conditions such as curfews actually place more severe restrictions on freedom than sentences received after conviction, such as probation, supervision, and conditional discharge. Furthermore, punitive pretrial conditions coerce people to plead guilty, undermining accused people's rights and recreating the negative impacts of incarceration in jail. These pretrial conditions violate the presumption of innocence that seeks to prevent punishment before conviction.

The current punitive approach of the Pretrial Services Division plays a key role in driving this troubling trend. Over the last six months, CCBF has repeatedly seen Pretrial Services impose punitive conditions on individuals for whom CCBF has posted bond. Through their observations of Central Bond Court from August to October 2017, volunteer courtwatchers with the Coalition to End Money Bond also documented regular imposition of onerous pretrial conditions such as curfews, as well as electronic monitoring operated by the Sheriff's Office. The full extent and impact of these punishments are not transparent: Advocates and the public are unable to access the most basic information about Pretrial Service's systemic impact because it is housed under the Office of the Chief Judge and thus not subject to Freedom of Information Act (FOIA) requests. 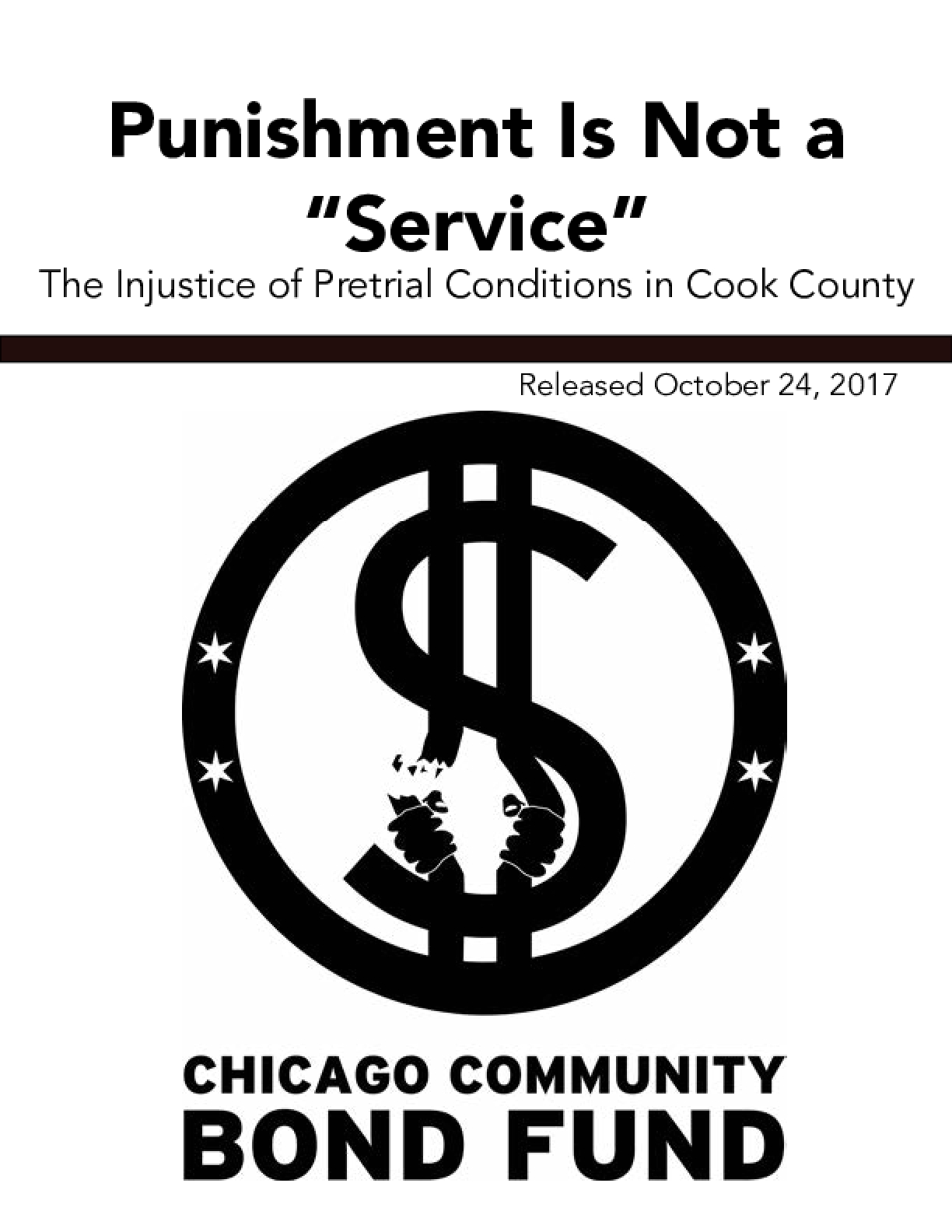