Purchasing Power: The Corporate-White House Alliance to Pass the China Trade Bill Over the Will of the American People

The passage of China Permanent Normal Trade Relations (PNTR) by the U.S. House of Representatives in late May 2000 over the overwhelming will of the American people was the result of the most forceful and aggressive corporate legislative campaign in history. Despite four-to-one public opposition, the bill was passed by the use of unprecedented amounts of corporate money in political contributions, advertising, lobbying and rented "experts," as well as the application of the White House s full resources. To fulfill their own overlapping goals, the corporate coalition and the White House worked in such tight coordination that the General Accounting Office has reported that federal law on Executive branch lobbying practices was violated. Deaf to pleas from even pro-PNTR House Democrats, the administration launched the China PNTR crusade to build a legacy for the President knowing it would damage Democrats chances to regain a House majority. To celebrate the House PNTR vote, President Clinton went out that night to a corporate political fund-raiser boycotted by many Democratic House Leaders. The corporate interest was in eliminating the annual Congressional review of China trade and to obtain unconditional, unlimited access to the U.S. market for goods produced in China. The day after the House vote, the Wall Street Journal and other papers finally reported that the corporations were not so much interested in access to the Chinese market to sell goods there, but rather sought guaranteed U.S. access for goods they could produce in China with its remarkably high-quality, cheap, government-controlled labor and lax environmental controls. Passing China PNTR was an important priority for both players for another important and symbolic reason: the proponents of corporate globalization and corporate managed trade had been defeated for five years by a determined citizen s movement that recognized that the corporate and White House globalization agenda was benefitting narrow corporate interests at the expense of working families and the environment. The Clinton administration and the corporate lobbies had pushed the North American Free Trade Agreement (NAFTA) and the Uruguay Round of the General Agreement on Tariffs and Trade (GATT) which established the World Trade Organization (WTO) through the Congress during the administration s first term. While the NAFTA and WTO fights required concerted corporate lobbying and public relations efforts, obtaining political support for expanding existing globalization policies had become much more difficult. Polling showed that people had become aware of the all-too-real down sides of what its proponents dubbed "free trade," but was increasingly revealed to be corporate managed trade. Several years after NAFTA's passage when its negative impacts became apparent, public opinion, never supportive of the corporate-White House trade agenda, turned frosty. Significant relocation of high-wage manufacturing jobs to Mexico, increased border pollution and health problems, and the declining safety of America s increasingly imported food supply made the public increasingly skeptical of the promises and projections made by the "free trade" proponents. The complete executive summary and access to the full report available via the link below. 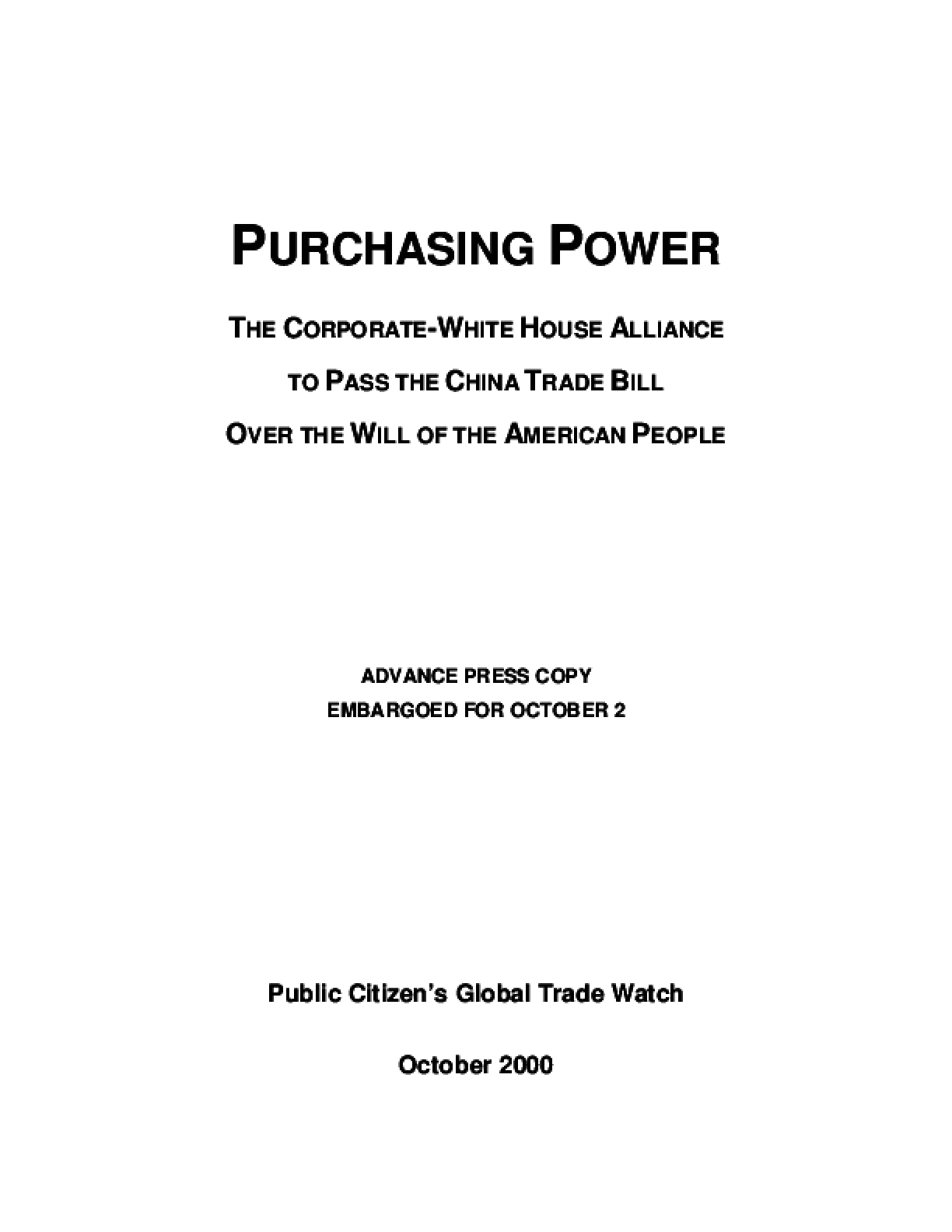