Every four years, the Boy Scouts of America (BSA) hosts the National Scout Jamboree, a 10-day event bringing Scouts together for outdoor adventure and community-building activities. Originating in 1937, the event rotated through a series of locations before landing at Fort A.P. Hill in Virginia for three decades beginning in 1981. Hosting the event at this US military garrison limited the BSA's ability to expand its programming. It also required costly investments in temporary facilities and improvements for each Jamboree. In a larger context, these Jamboree challenges were accompanied by declining national membership; five million people participated in Scout events in 1999 and that number would fall to under three million by 2014.

In 2007, the BSA embarked on a capital project to build its fourth high-adventure base camp in the US and establish a permanent home for Jamborees. The new facility was intended to provide a better Jamboree experience for Scouts and attract a larger and more diverse membership. The BSA also embraced the project as an opportunity to demonstrate leadership in environmental conservation, and to practice citizenship by partnering with its neighboring community. BSA leaders felt that this project could help reshape the Scouts' image and fuel organizational growth.

In 2009, the BSA selected a 10,600-acre decommissioned mine in rural West Virginia as the site for the new facility and named it the Summit Bechtel Family National Scout Reserve (SBR). With a mandate to complete construction for the next Jamboree in less than four years, the BSA established a wholly-owned subsidiary to manage the project. This approach allowed project leaders to bypass institutional bureaucracy, but limited communication and buy-in with the broader Scouting community.

The project finished on time and on budget, and over 45,000 Scouts and visitors joined the 2013 Jamboree. Although many stakeholders viewed the event as a success, this turnout was the lowest of any Jamboree since 1981. Subsequent usage of the high-adventure camp also fell short of projections, and the SBR experienced a $9 million operating loss in its first year.

The Scouts and families who visited the SBR were introduced to a modernized, environmentally-focused organization. The site succeeded in offering contemporary adventure activities -- such as zip lining, skateboarding, and mountain biking -- that could appeal to a new generation of Scouts. At the time of this report, however, the more sweeping intent for the SBR to reshape national perceptions of the Scouts and help usher in a new era of growth was yet to be realized. On the local level, the project helped advance sustainable wastewater policy in West Virginia and created construction jobs, although the region has yet to see the substantive infusion of economic activity that many anticipated from the SBR.

This case study is based on research conducted by MASS Design Group in July 2015. Funded by the S. D. Bechtel, Jr. Foundation, it illustrates how a capital project can expand the profile and programming of an organization in ways that showcase its values. It also demonstrates the challenge of ensuring good communication and setting accurate expectations with key stakeholders during a large-scale, fast-track project process. 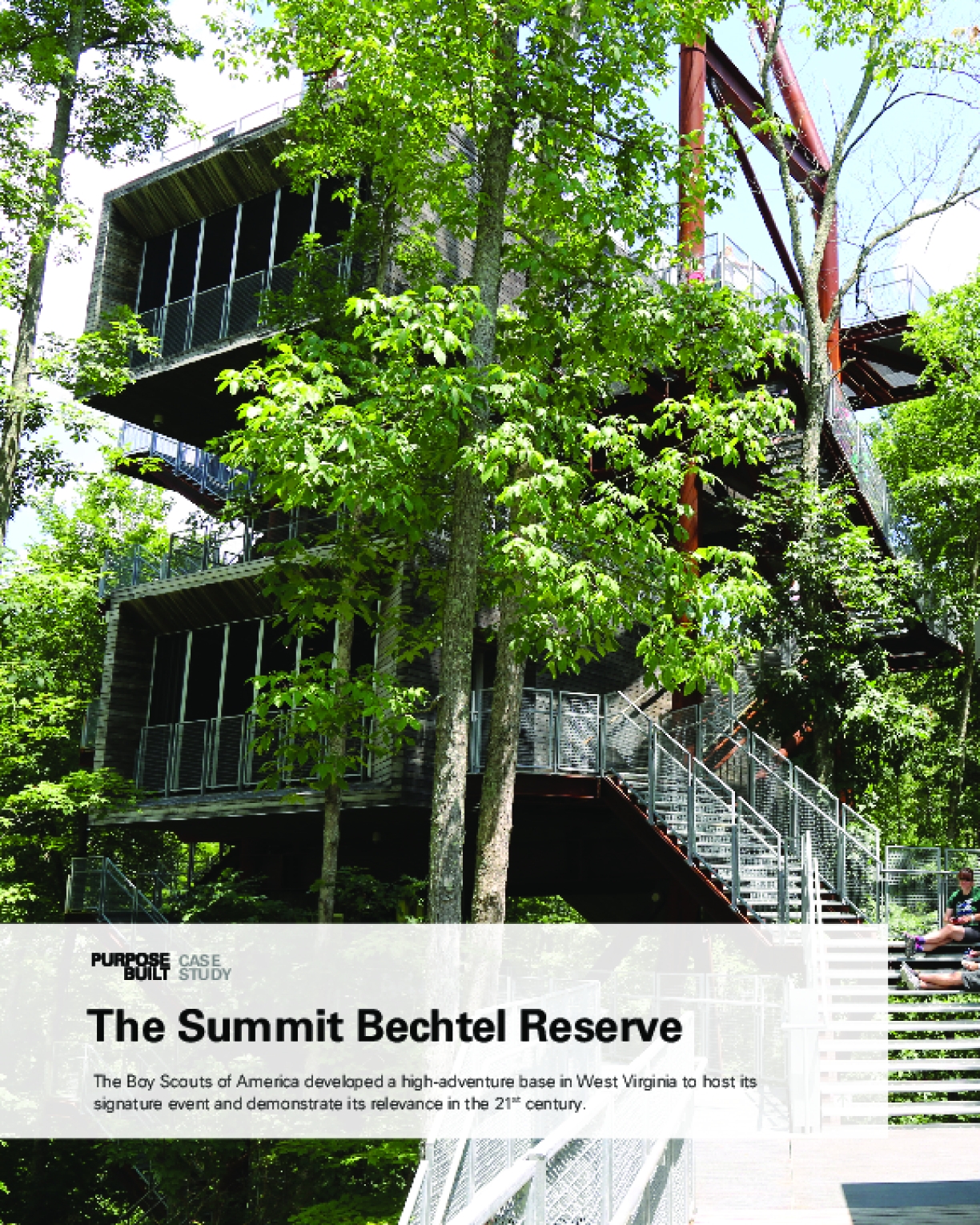