This study is designed to increase understanding of the district's role in school improvement and factors contributing to the success of districts and their schools. American Institutes for Research (AIR), as a partner in the California Comprehensive Center at WestEd, has identified high-performing districts in California to learn from their success and to share their practices with others. We have focused on selected district and school leaders' perspectives on the strategies they considered most influential in their success, with a particular emphasis on the interaction between these districts and their schools.

The study builds on previous work carried out by AIR as part of the California Comprehensive Center, in which we have identified and profiled high-performing schools, turnaround schools, districts performing well with students in special education, and a matched sample of lower and higher performing schools for the purpose of knowledge sharing through school visitations. Similar to our previous studies, we have defined "high performance" such that districts could be empirically identified based on clearly specified criteria. These criteria were informed by input provided by California policymakers and practitioners (i.e., representatives of the California Department of Education and the Curriculum and Instruction Steering Committee of the California County Superintendents Educational Services Association).

The districts identified in this study are "raising all boats." By this, we mean that virtually all schools and student subgroups are performing substantially better than statistically predicted during a four-year period compared to similar districts in California. This definition of high performance adds to previous definitions in that it takes into account not only overall performance but also performance of individual schools and subgroups of students.To simplify the analyses, we included only unified school districts, which enroll more than 70 percent of California's public school students. After defining high performance and identifying 30 California unified districts that met the high-performing criteria, we selected six to feature in this study: Carmel, Coast, Glendale, Redondo Beach, San Marcos, and Temecula Valley Unified. These six districts were selected to maximize sample diversity in terms of district size, student demographics, region of the state, and urbanicity. In each of these six districts, we conducted interviews with a leader from the district office and three principals from a randomly selected elementary school, middle grades school, and high school to inquire as to the strategies perceived as most contributing to their success.

The main strategies identified by at least six respondents across three districts included:1. A clear instructional vision and process2. Support for struggling students3. Strong district and school leadership4. An emphasis on collaborationThese strategies largely align with what has been found in the literature on high-performing districts.

Respondents also were asked to identify their main challenges and solutions to the challenges. The identified challenges included:* Budget cuts* Meeting the academic needs of all students* Staff resistance to change* Relationship with the teachers' union

Although respondents across districts identified similar strategies, they also approached the road to high performance in different ways, depending on their district size, their student population, and their reform history. Thus, we do not conclude from these findings a clear "one size fits all" recipe for district and school success. These findings suggest that the pursuit of excellence may need to be tailored, at least somewhat, to each unique situation. This seems to suggest the advantage of coupling clear goals, methods for measuring progress, and accountability with local flexibility in regard to goal realization.

At the same time, we believe that other districts can learn from the common elements and specific examples summarized in this report. As an example, one respondent reported that the district had already engaged in knowledge sharing by training other districts in the use of an instructional framework. The California Department of Education and County Offices of Education may wish to consider serving as brokers of this expertise by setting up structures for sharing these strategies with other districts and schools across the state. District and school leaders can be important resources in assisting other districts facing the important task of improving learning for all students. 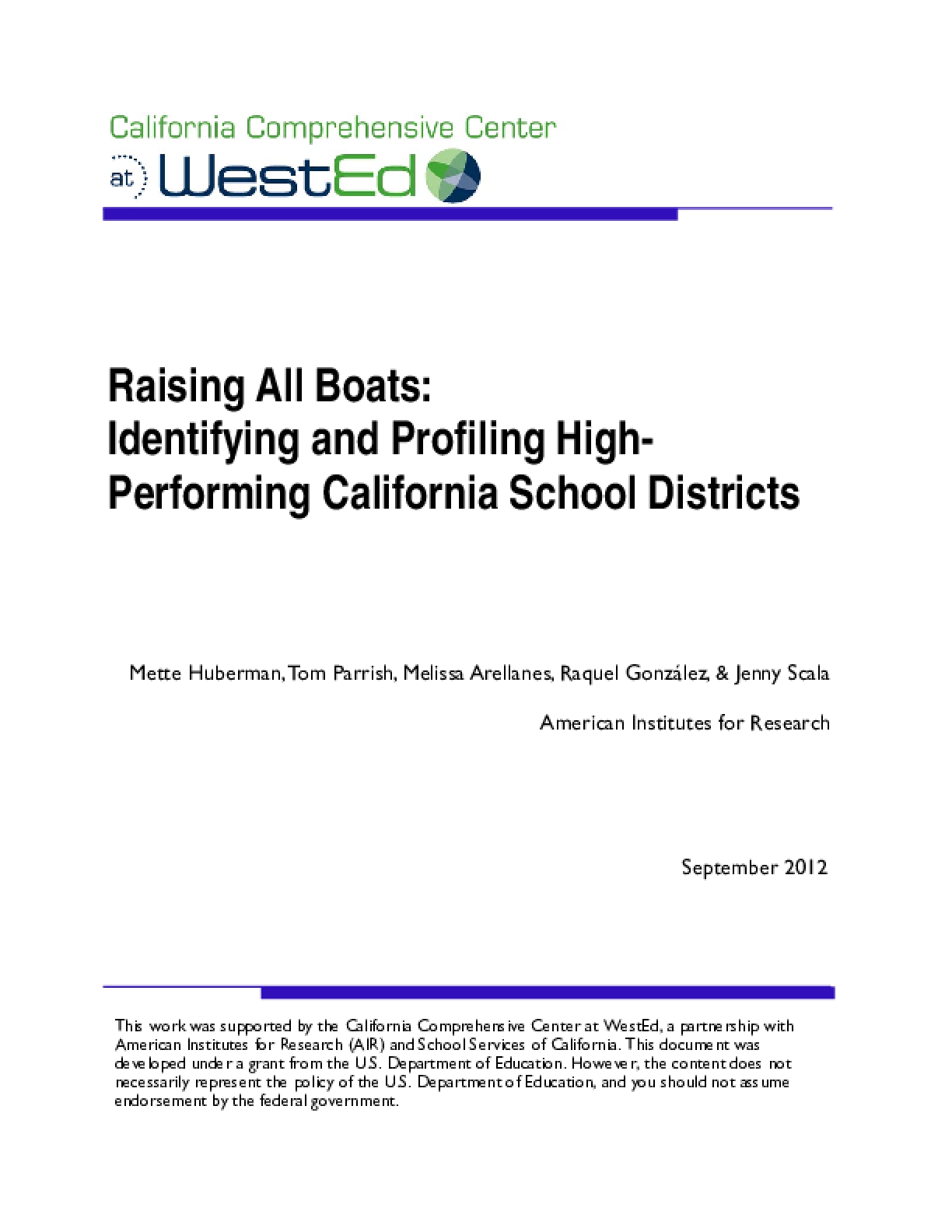