In this report, we follow up on the status of the NAFTA promises and the China Permanent Normal Relations (PNTR) promises which still had the possibility of being kept. (For instance, a promised fund-raiser is irrelevant once the Member is out of Congress.) Nearly eight years after the NAFTA deals were made and eighteen months after PNTR and promises for domestic programs remained unfunded. The special deals promised to obtain NAFTA and PNTR votes remain unfulfilled. Promises remain unmet even though the Members of Congress involved kept their end of the bargain and voted for NAFTA C some incurring long-lasting political ire at home. Many of the Administration's promises were delivered in formal letters to the target Members by Cabinet Secretaries or the President. Other deals were added into the NAFTA legislation in the House Rules Committee on the eve of the vote. While the letters of "commitment" have made tracking the deals somewhat easier, the letters proved to be worth less than the paper on which they were written. Promises in the NAFTA implementing legislation either were not funded or, in the case of safeguards for Florida fruits and vegetables, were not implemented. Over eight years, the Clinton Administration failed to deliver on the NAFTA vote-deals -- special funding for in-district projects and the policy-related promises to change U.S. regulation. Now, the Bush Administration is trying desperately to gin up support for the controversial Fast Track trade negotiating authority, bill H.R. 3005. Days before the vote, the measure is 40-plus votes short of passage, as critics of corporate managed trade have successfully demonstrated the woefully inadequate track record of NAFTA and the substantial failures of trade agreements to generate jobs, economic growth or protect the environment. The examination of the actual follow through of the deal-making necessary to secure NAFTA and PNTR votes reveals that promises on Fast Track also are unlikely to come to fruition. The Bush Administration's capacity to press Democrats on any spending plan after bailouts of the airlines, additional safeguards for insurers against terrorism losses and huge corporate tax breaks is rapidly eroding, making special pork barrel deals for Fast Track votes less likely to be fulfilled. 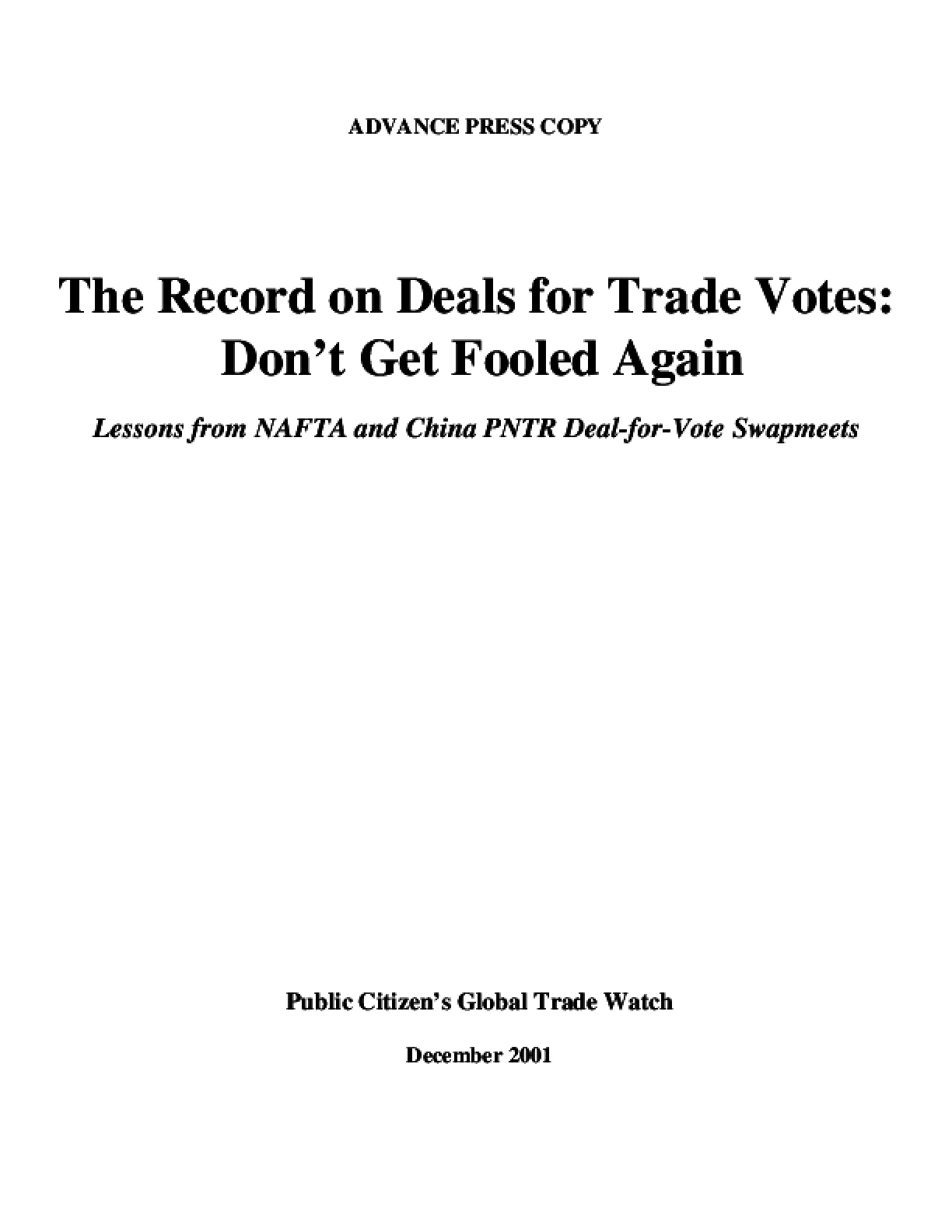