Reorganizing 9-1-1 Operations: Consolidation in Other States

Consolidation of 9-1-1 emergency communications is a politically charged issue full of opportunities and pitfalls for state policymakers. Typically, consolidation reduces the number of locally managed Public Safety Answering Points (PSAPs) by combining operations of several communications centers.1 The process may also result in a reduction in the number of sites that dispatch police, fire, and emergency medical services (EMS) response units. If the process is handled well, it can lead to efficiencies and improved service for citizens. If not handled well, it can disrupt vital services and increase tensions among state and local authorities. As New Jersey leaders consider further consolidation of the 9-1-1 system, they should take into account the experience of other states. This report is the result of the Heldrich Center's research on trends in consolidation. A central goal of this research is to throw light on different approaches to encouraging consolidation and lessons that may inform New Jersey's future strategy. Telephone interviews were conducted with officials in six states and two regions that have experience with consolidation of answering and dispatch points (See Map below). The states are Connecticut, Maine, Minnesota, Oregon, Washington, and Wisconsin.2 The two regions are Cook County, Illinois and Volusia County, Florida. In addition, researchers reviewed state reports and public documents. The methodology is described in the appendix. The Heldrich Center's research yielded a range of findings on the experience of other states: - States have tended to support local con solidation by providing financial incentives, setting standards, and providing technical assistance. There are few examples of state policies that require rather than encourage PSAPs to merge operations. In fact, none of the states in the study employs a direct mandate. Some states have played a limited or virtually no role in supporting local consolidation. - The states and regions included in this study differ on many dimensions, but they share a common experience with consolidation of 9-1-1 services. State and regional officials cite the same barriers to consolidation and point to similar models of effective practices. - Although states can play a role, consolidation is, in essence, a local process driven by local decision-makers. Local elected officials are likely to drive con solidation if they recognize the benefits. Governance and accountability are thorny issues that must be worked out locally. The results of consolidation are not well documented. Examples of cost savings are more commonly cited at the state level than at the local level. Estimates of cost savings related to personnel are particularly elusive. State and regional officials strongly believe that consolidation leads to improved service, although it is not clear how improved service is measured. 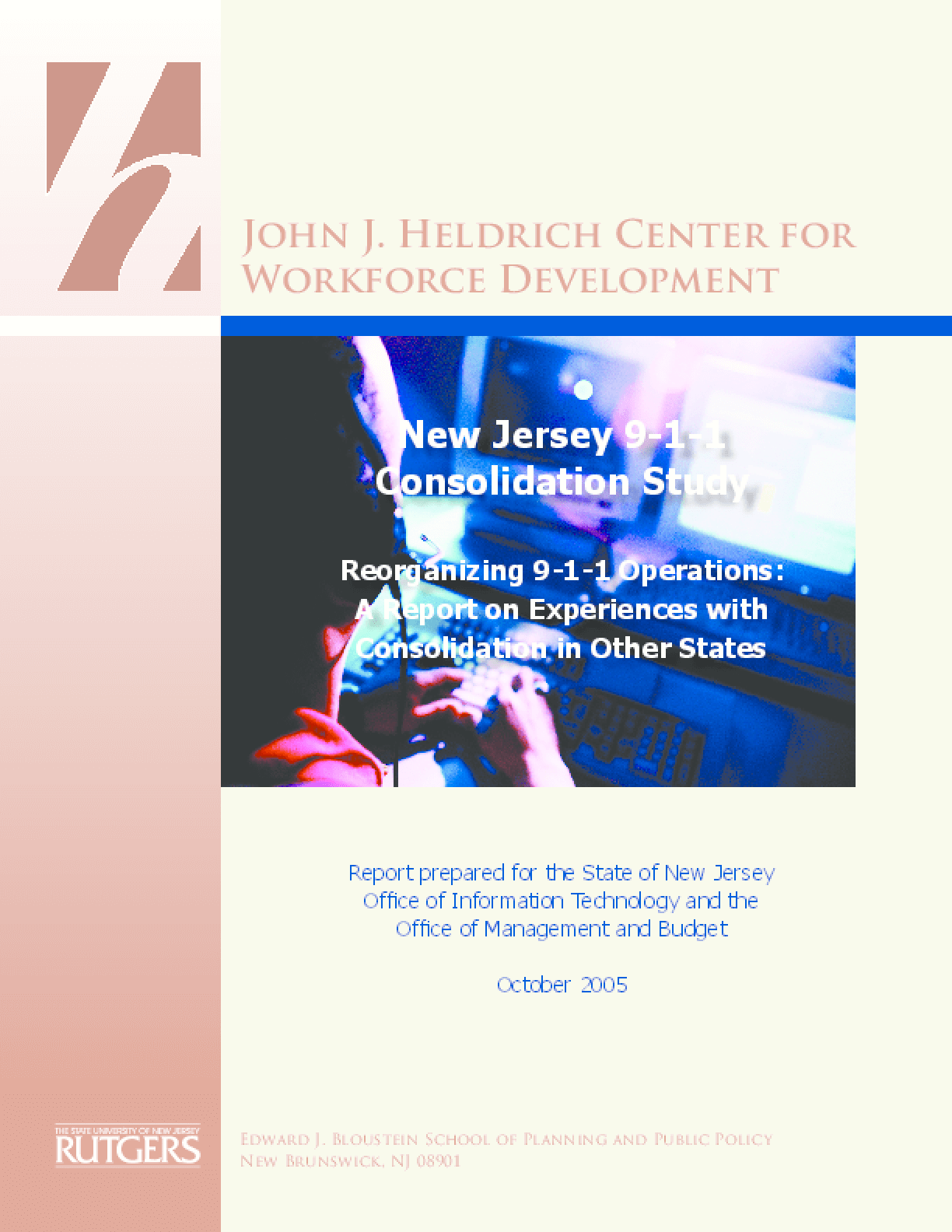