The Consumer Financial Protection Bureau (CFPB, or "the Bureau") in December 2013 released preliminary results of a study called for in the 2010 Dodd -- Frank Wall Street Reform and Consumer Protection Act on financial services businesses' use of arbitration clauses in consumer contracts. Such terms, or forced arbitration, call for disputes to be settled before a private arbitrator instead of in a court of law, and usually prohibit consumers from pursuing cases as a class. The data from the first report covered several aspects of forced arbitration. For example, it confirmed a high prevalence of arbitration clauses in the terms of service of credit cards, checking accounts, and prepaid cards. Additionally, according to the report, nearly all of the arbitration clauses contained terms denying their customers the ability to participate in class actions.Based on an examination of the data from the American Arbitration Association (AAA), the chief provider of consumer arbitrations, the Bureau determined that few consumers go to arbitration to resolve disputes with financial institutions. In making these and other determinations, the Bureau examined information involving four major financial services and products: credit cards, checking accounts, prepaid cards and payday loans. Other consumer financial services sectors under the CFPB's jurisdiction similarly use forced arbitration clauses and prohibit class actions. Notably, the debt settlement and auto loan sectors recently have fallen under considerable scrutiny by the Bureau and other state and federal officials for engaging in questionable practices. A review of materials involving these sectors shows that businesses within them have used forced arbitration to avoid having to respond to allegations and, in many instances, escaped accountability for actual wrongdoing. Meanwhile, users of their products and services who have suffered financial injuries from predatory and deceptive practices have been denied adequate legal remedies. Another sector that makes widespread use of forced arbitration clauses is the private student loan industry. The agency recently released findings from its investigation into the private student loan market, which documented the impact of the high-cost loans. In 2012, Public Citizen also issued a report on the industry. It concluded that unsavory conduct by the private student loan industry combined with restrictive terms in borrowers' promissory notes that require disputes to be resolved in private arbitration were not conducive to fair lending. The Bureau can make these industry sectors answerable for some of their shady practices by restoring consumers' ability to enforce their rights on their own. The Bureau has the authority to write a rule to require the regulated consumer financial services industry to eliminate predispute binding mandatory (or forced) arbitration from consumer transactions involving all products under its jurisdiction. 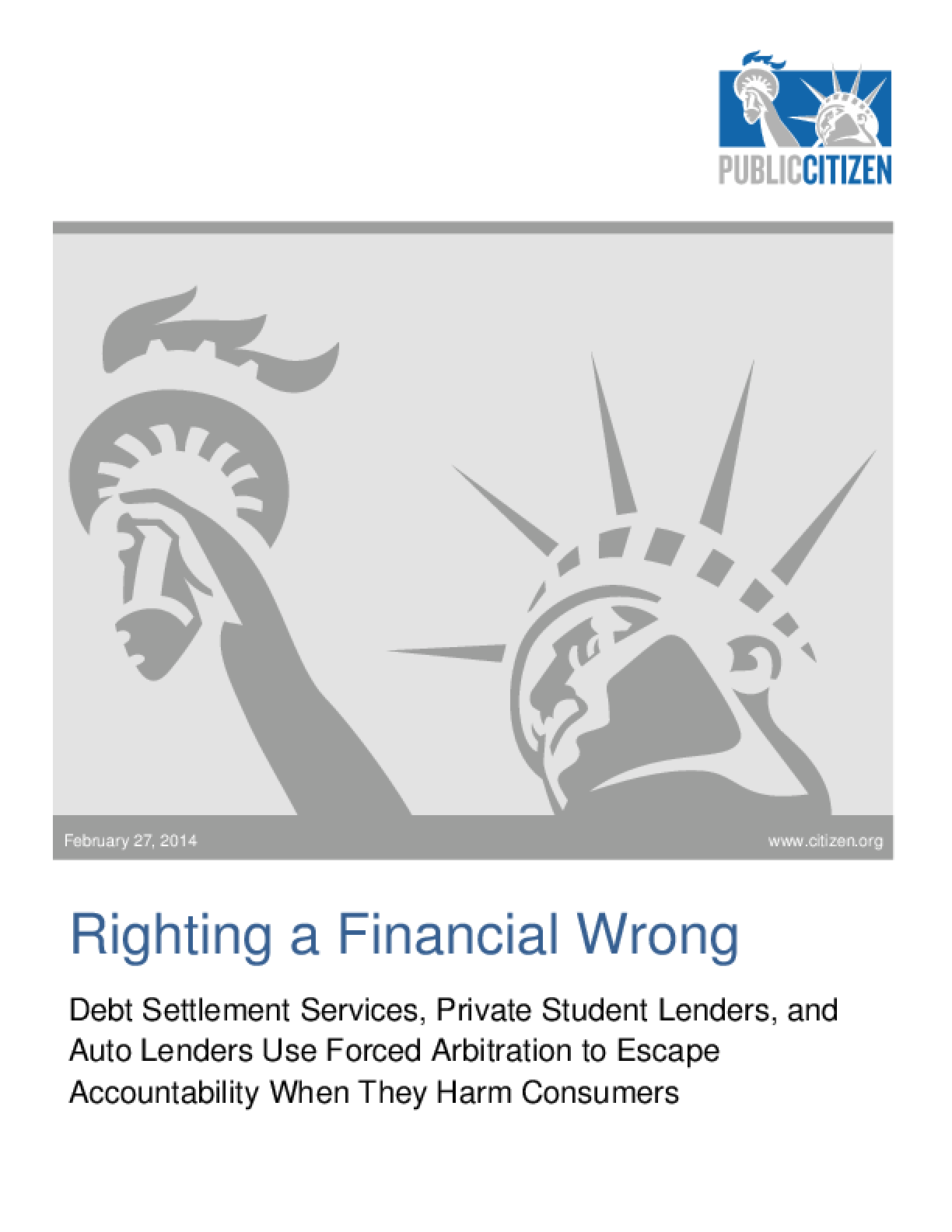