In 1999, the Center for Government Services at Rutgers, The State University of New Jersey completed a study of New Jersey's E9-1-1 system.1 The study offered a snapshot of the extensive and decentralized network of communications centers that receive incoming calls requesting emergency assistance and that dispatch police, fire, and medical units. It recommended "a concerted effort" be put in place by all levels of government to achieve further regional cooperation, especially regionalization of dispatch services, arguing that such cooperation would likely result in improved service and lower costs. In 2005, the New Jersey Office of Emergency Telecommunications Services and the New Jersey Office of Management and Budget (OMB) commissioned the John J. Heldrich Center for Workforce Development at Rutgers University to update the 1999 report and to describe the current history, delivery system, and organization of the state's emergency 9-1-1 system. Researchers were also asked to determine, through the analysis of program data, whether consolidating 9-1-1 services could reduce costs to the state and/or local governments without sacrificing responsiveness, as well as to identify model frameworks at the county or multiple local jurisdiction level that could facilitate additional consolidation. This report is the fourth and final deliverable to be produced by the Heldrich Center for the consolidation study. The other reports detailed the organization of New Jersey's E9-1-1 system, summarized findings from other states, and outlined key issues and options for system consolidation.2 For the purposes of this study, consolidation is defined as two or more 9-1-1 communications centers entering into an agreement to provide dispatching and call-taking services from a single location. This process typically reduces the number of agencies providing emergency communication services. Also, the terms "consolidation," "shared services," and "regionalization" are used interchangeably in this report. The findings in this report are based on: Site visits to, and interviews with 20 local communications centers in New Jersey and interviews with local officials in nearly every New Jersey county (see Appendix A for a list of interview subjects); Interviews with 9-1-1 directors in six states and two regions outside New Jersey; A statewide survey of communications centers that handle incoming calls and that dispatch emergency services; and A review and analysis of data on the cost of handling 9-1-1 calls. 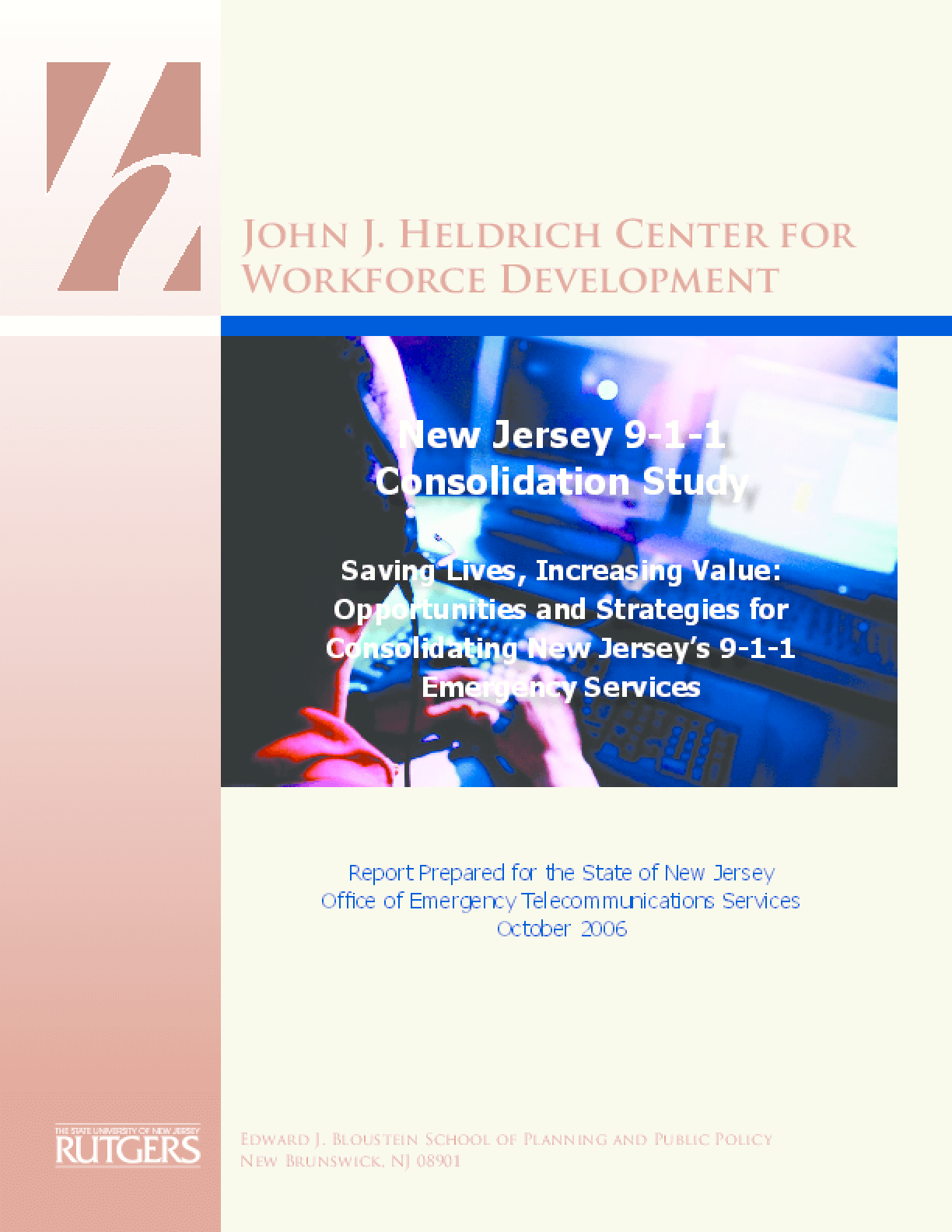